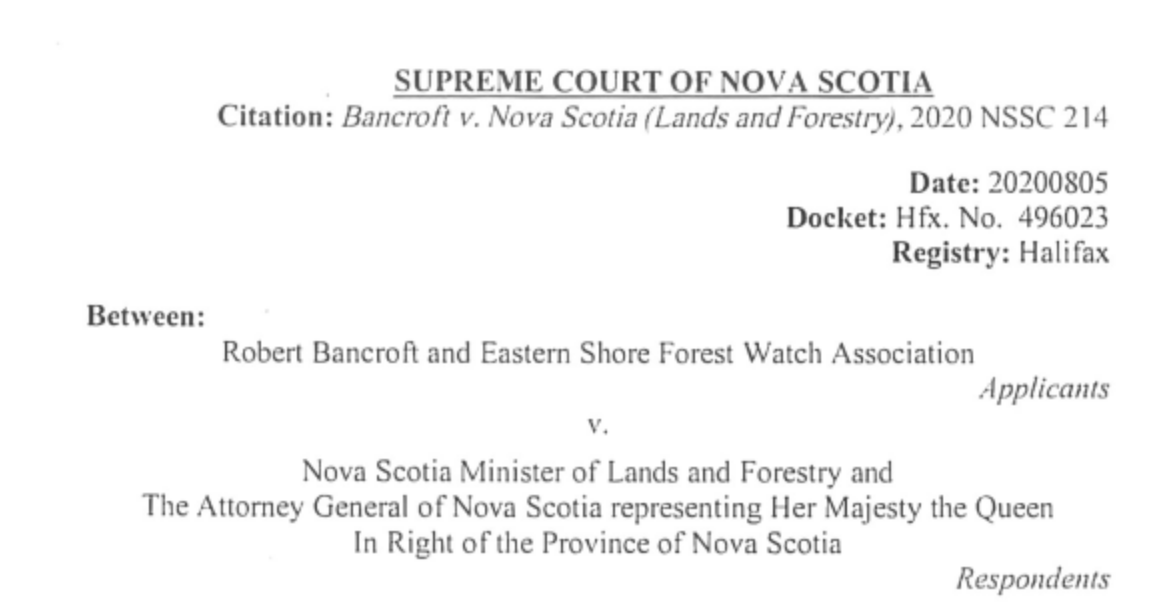 "The Public Had Every Reason"

Opponents of the provincial government’s underhanded attempt to sell Owls Head Provincial Park to a billionaire golf developer won a critical procedural round in Nova Scotia Supreme Court on Thursday, August 5th that allows their lawsuit to stop the sale to go forward.

Former provincial biologist Robert Bancroft and the Eastern Shore Forest Watch Association filed suit in late January 2020 challenging the decision by Lands and Forests to delist the park, a decision that the McNeil administration made in secret on March 13, 2019. The public had no knowledge of this decision, and the subsequent secret negotiation of a Letter of Offer with the developer, until December 18, when CBC reporter Mark Gorman broke the story, based on information that he had obtained through a FOIPOP request.

Opposition to the secret sale decision grew rapidly. The Facebook group “Save Little Harbour/Owls Head From Becoming a Golf Course,” established the day after Gorman’s story appeared, grew to more than 3,000 members in a matter of weeks. A GoFundMe campaign to fund a lawsuit against the province raised its goal of $15,000 in less than a week.

But the government claimed that the lawsuit should not go forward because the applicants had failed to file their lawsuit quickly enough, forcing the applicants to go to court to ask a judge to rule that because of the peculiar circumstances of the government’s secret behaviour, the court should grant them an exemption from the filing deadline.

Supreme Court Justice Kevin Coady heard arguments from the applicants’ attorney Jamie Simpson and from Lands and Forestry attorney Jack Townsend on June 29 and issued his opinion today in favour of the applicants.

Coady basically rejected all of the government’s narrow procedural claims. But he also took the occasion to demolish Lands and Forest Minister’s  Iain Rankin’s fundamental claim that everyone outside of his department was incorrect in thinking that Owls Head Provincial Park was a park, and therefore the public was mistaken in the belief that his department could not sell off the land in secret.

In his decision, Coady wrote, “The evidence on this motion clearly establishes that Owls Head was portrayed to the public as a Provincial Park. Government documentation and maps, going back as far as 1978, refer to the area as ‘Owls Head Provincial Park’.…The public had every reason to assume Owls Head was a provincial park and, therefore, attracted protections not available on Crown lands.”

Nor was that the end of Coady’s dismissal of Rankin’s lame defense. There is a five-part test in Nova Scotia law that judges use when considering lawsuits asking for the extension of a missed deadline. One of those tests is whether the applicant had a “reasonable excuse” for the delay in filing. Coady wrote that the applicants “have a reasonable excuse for the delay (i.e. secretive nature of the process).”

Coady was careful to note that his decision had no bearing on the actual merits of the case and ordered the applicants to file their Notice of Judicial Review within 14 days.

Simpson said he was pleased that the judge had “accepted our overall argument.” Simpson said he expected he would be filing a document similar to the one he filed in January. “The next step after filing will be a short hearing before a judge to set up a schedule for arguing the case,” Simpson said.

“When we get our day in court, we will be arguing that the government’s actions had basic elements of unfairness, that this secret sale was outside the bounds of proper government decision making.” He also noted that it was possible that the government could decide to appeal Coady’s decision to the Nova Scotia Court of Appeals.