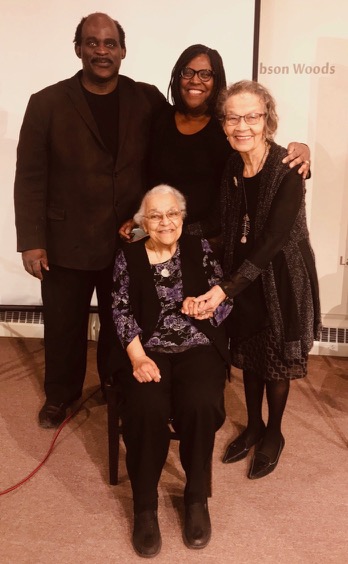 At a special presentation in December at the Black Cultural Centre in Cherry Brook, Woods talked about his discoveries, aided by stories from three African Nova Scotian women. Wanda Robson was one of Viola Davis’s sisters; as a small child, she was sitting in her high chair when the explosion took off, and talked about the miracle that left her house as the only one standing on their block.

Geraldine Browning, an educator and human rights activist who received the Order of Nova Scotia in 2017, talked about the death of her grandfather, who had been working on a ship in Halifax Harbour. And Wanda Lewis told the story of how relief authorities provided smaller amounts to black families.

One of Woods’ most moving discoveries involved the role of Dr. Clemente Ligoure, who ended up treating hundreds of victims in the days following the explosion at his private clinic on North Street. Ligoure moved to Nova Scotia to join the medical officer of the 2nd Construction Battalion, but was denied his commission because he was black. In addition to being Nova Scotia’s first licensed physician, he also became the publisher of the Atlantic Advocate, the province’s first black newspaper.

Through his research, Woods has been slowly expanding the list of known African Nova Scotian deaths from the explosion. The evening’s program listed 11, and Woods said he’d discovered 3 more since the program went to the printers.