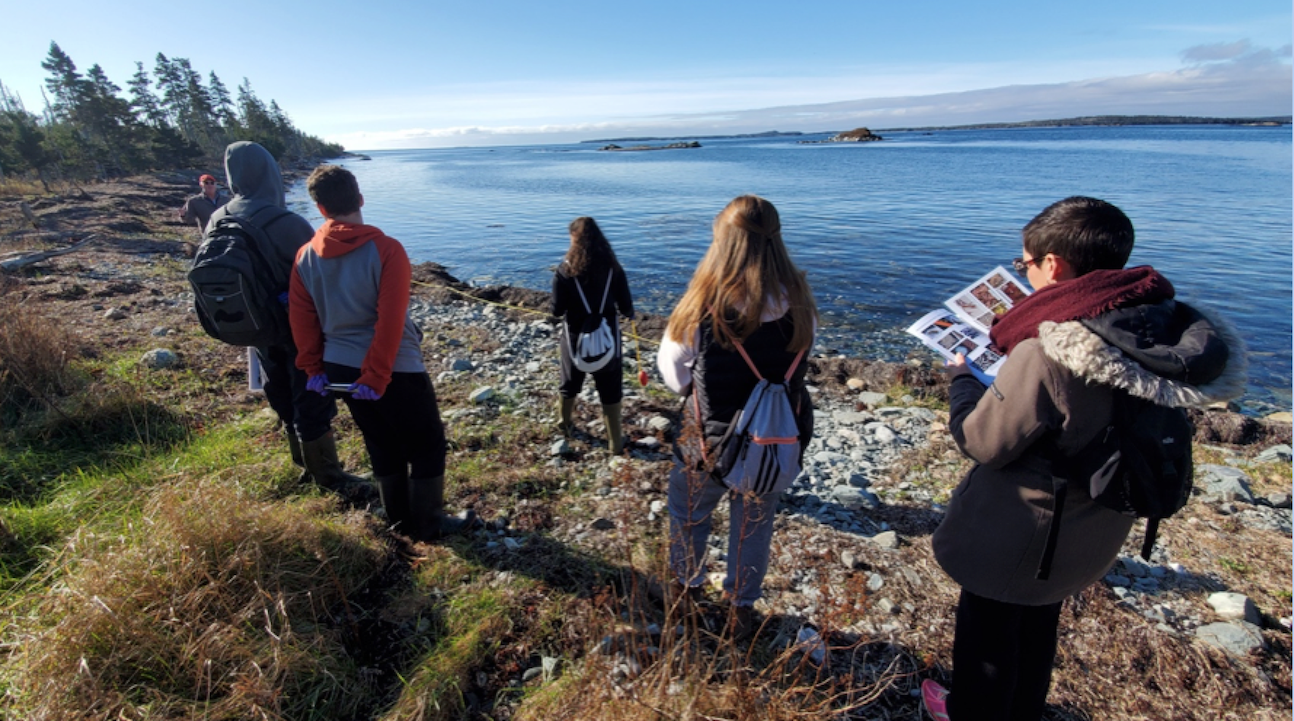 If you were out walking in Taylor Head Provincial Park on a brisk Wednesday at the end of October, you may have spotted a group of students huddled at the water’s edge or picking through the tall grasses by the beach—a group of Grade 10 science students from Duncan MacMillan High School taking part in a microplastics workshop.

The workshop was led by Oceans North, a non-profit organization that supports science- and community-based conservation. The students started off in the classroom with an overview of microplastics – what they are, where they come from, where they’ve been found, and what they look like under a microscope.

Microplastics are any type of plastic fragment less than 5mm in size. Some are broken down from larger pieces of plastic or come from synthetic fibres in clothes, while others have been manufactured at that size, such as the “microbeads” within cosmetic items like toothpaste and body scrubs. Researchers are finding these tiny plastic pieces, often only visible through a microscope, in marine species and ecosystems worldwide – even in extremely remote locations.

While there are a few things we do know about microplastics, we still have much to learn – such as the impact that they have on marine life, and the threat they may pose to human health. For now, collecting microplastic samples from a variety of locations in Canada will provide a clearer picture of where microplastics are found in our oceans.

At two locations in the park, in Pyche Cove and near Redman Head, the students identified seaweed and seashore marine species and learned how to operate a water filtration system.

One student said that the workshop helped them learn that “microfibers are in the oceans” and that “water takes it to different places”. Another mentioned that they “learned about the different types of seaweed and how to filter water to look for microplastics.”

The OceanWise microplastics lab in Vancouver will analyse samples from the water filtering for plastic content at the. Oceans North staff will bring back the results to the students and contribute the data to assist with broader understanding of the source of microplastics in Canada’s ocean.

After learning about seaweed identification and water filtering, the students participated in a beach clean, or a “beach combing” activity. While at first glance the park appeared pristine, students quickly filled two garbage bags with larger pieces of plastic and garbage they found along the beach. Sorting through the collected items from the beach, the students found bottle caps, plastic shovels, elastic bands, and an assortment of other plastic pieces.

The purpose of this workshop was to give students a chance to experience environmental science fieldwork in a local environment, while also thinking about plastic pollution on a more global scale. As their teacher noted after the workshop, it was also valuable because it “gave them an opportunity to be more in touch with their environment.”