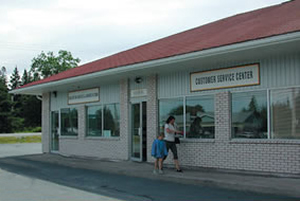 A Hidden “Gym” By Wyn Jones

Musquodoboit Harbour harbours a few small gems. One of my favorites is a place officially known as the Musquodoboit Health and Fitness Centre.

Those of us who bravely utilise the facility on a regular basis know it simply as “the Gym”.

Situated at the back of the building that houses the Municipal office and the Library, it is a large room filled with the most wondrous equipment designed to aid such as I, in atoning from a lifetime of beer and french fries. There is no question of regaining the shining bloom of youth, just a chance to look the doctor in the eye and truthfully mention regular exercise.

The center of the room is occupied, in the truest sense of the word, by an evil-looking machine that could be a cross between a heavy water production unit and a weapon of mass destruction. It seems to provide a selection of things for a fitness buff to do in toning those muscles that have as yet rested peacefully undiscovered. Personally I think it has a wicked soul and I pass it by.

The black leather punching bag by the far wall hangs morosely from the ceiling. On its shiny surface the photo of one Darryl Dexter is shortly to be taken over by that of our latest premier, perhaps after the coming budget.

Then there is the whole section devoted to weights or to “pumping iron” as the experts call it. It is most definitely a whole lot of very hard work and should really be avoided at all costs. But every morning young men, and ladies too, lift extraordinary amounts of metal, sometimes to the most intricate series of grunts and groans. I lift two twelve pound weights precisely twenty times twice over and then another bar weight up over my head for a further twenty times, twice over. I am following the instruction of one of the fitness attendants who are there to ensure that the patrons do not ruin themselves in their enthusiasm. These attendants are among the most happiest people on the planet. Perhaps they know something that I don’t.

But all in all, it is a place that I have come to value a great deal. The people I meet each morning have become friends in weightiness adversary, and the attendants are so helpful and so cheerful . Stopping in moves my morning enjoyingly along and prepares me for a decent lunch followed by a well earned afternoon nap.

I would recommend this to anyone. It is truly a gem of a gym.