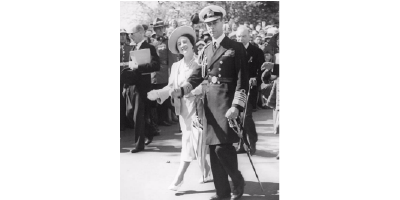 A Schoolgirl's Epic 1939 Journey to see the King and Queen

Tangier's Bernice Logan shares her vivid memories of a once-in-a-lifetime school trip to see King George VI and Queen Elizabeth on their 1939 visit to Halifax.

It was May 1939. Our Mother would have called from downstairs: “Get up. Get up. You have to get to school by 9 o’clock”.  What were we going to school for? We were going to Halifax to see the King and Queen. King George VI and Queen Elizabeth had come to our Province and every school child possible had to go see them.

We got dressed ( there were seven in our family to go ), had a breakfast of porridge and toast ( made over an open fire of a wood burning stove), packed a lunch of bread and cookies, and walked back to the one- room school we  attended. The excitement was tremendous. We had never been to Halifax in our lives, and the fact that we were going to be travelling in the back of a truck did not diminish our excitement.

Since it was going to be a long trip over a dirt road, some of the children brought cans with them in case the worst happened- they got car (truck) sick. Our driver, Mr. Jimmie O’Connell from Mooseland, herded us on the back of his truck and we were off. Fortunately, it was a fine day so we didn’t have to worry about rain spoiling the trip.

The long drive took about three hours but the fact that we were going to see the King and Queen kept us from tiring of the ride. When we arrived in Dartmouth, we had to take the ferry across to Halifax. There were no bridges in 1939, so the ferry was rather exciting as we watched the waves hitting the side of the boat.  Nobody was allowed to get off the truck for fear of losing a child. The chaperones (including my oldest sister) kept an eye on all us all.

We arrived at Citadel Hill around noon, and were herded to a spot on the hill where there was a sign designating our spot--Tangier School. We felt very important and settled down to eat our meager lunch. We hoped no one would have to go to the toilet because we didn’t see any place that looked available for such a thing.

Soon our eyes were turned to the stage at the bottom of the hill. There they were, with other important looking people, arriving on the stage. They were so far away that they looked very small but that did not matter. It was the King and Queen and we had come a long way to see them. There must have been some speeches, but we couldn’t hear them.

We gazed at the stage in awe, and a short time we saw the figures moving again. A little child was giving the Queen some flowers and the royal couple moved off the stage. It looked like the Queen had a pretty blue dress on, but we weren’t sure. The couple got lost in the crowd of dignitaries following them – they were gone. How we wished we had been a little closer, but that was not to be and we had to be satisfied with what we saw.

Our chaperones began to round us up and lead us back to Mr. O’Connell’s truck. We were ready to make the long trip home. Nobody needed to go to the bathroom (at least that is my memory) and as we climbed on to the truck, we were all given medals with an imprint of the King and Queen on them. We were thrilled to receive them and held on to them for dear life.

After another ride on the ferry to get across the harbor, we settled down for the long ride home. It was close to suppertime when we got to our school. We walked to our homes and looked forward to a welcoming supper. We would never forget our trip to Halifax to see the King and Queen.