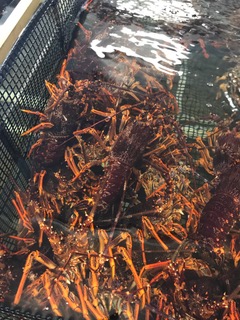 A Trip to Tasmania

“It’s the longest trip I’ve ever been on,” said Peter Connors of his trip to Hobart, Tasmania with a delegation led by Department of Fisheries and Aquaculture Minister Keith Colwell. In a recent interview, Connors talked about his experience on the trip. Thus far, Colwell’s office has not released any comments about the trip, although Colwell did sign a memorandum of understanding with the Tasmanian Minister for Primary Industries and Water.

“I thought it was a good trip,” Connors said. “We got to visit their Fisheries and Oceans management facilities, we got to see their salmon farms, and we went to some of the fishing wharfs and talked with the fishermen about lobsters.”

Connors emphasized the value of networking in a world in which fishing has gone global. Both Tasmania and Nova Scotia export huge amounts of lobster to China. In 2017/2018, rock lobster exports for all of Australia went up 14% to $722 million, of which $377 million went to China. Salmon exports from Tasmania increased by $74 million in 2017/2018. (Figures from the Australian Agricultural Trade Annual Review 2017/2018).

The Nova Scotia party toured one salmon farm location. “There was a big row of pens,” Connors said, “quite an operation. All of the fish were being fed by an operation controlled remotely from an office up in town.”

Colwell is a big supporter of expanding fish farms in Nova Scotia. “The Eastern Shore Fisherman’s Protective Association has opposed fish farms in the past,” Connors said. “We’re in opposition to them. The province knows what our position is, and they respect that. We know the province wants to talk about the issue, and that they’d like us to change. But they didn’t push at all on this trip.”

There are some significant differences in the way the operating regimes for lobster fishers. “There are only 160 lobster fishermen in Tasmania,” Connors explained. “Their tradition allows them to fish all around Tasmania. That’s a sharp contrast with our lobster industry, where we’ve got 10,000 fishermen in the Atlantic provinces, and the whole fishery here is micromanaged. They use a quote system, with a 20-ton quota per fisherman, and they can only use 40 traps per boat, which they haul over and over. Sometimes they go lobster fishing for 3 or 4 days.”

Rock lobsters have large bodies, but no claws. And because of the high demand from China, rock lobster has been selling for $100/kilo, versus only $8/kilo for Nova Scotian lobster. Connors does not think there’s any real competition between the two, and attributes the high price Tasmanians are getting to a very successful “Green Program” certification process.

The Nova Scotia group also heard about some of the problems Australians have encountered with Marine Protected Areas (MPAs). “They’ve got a massive amount of MPAs down there,” Connors said. “I definitely took away some negatives from what I heard.” In recent years, the Australian government has been reducing the size of some MPAs.