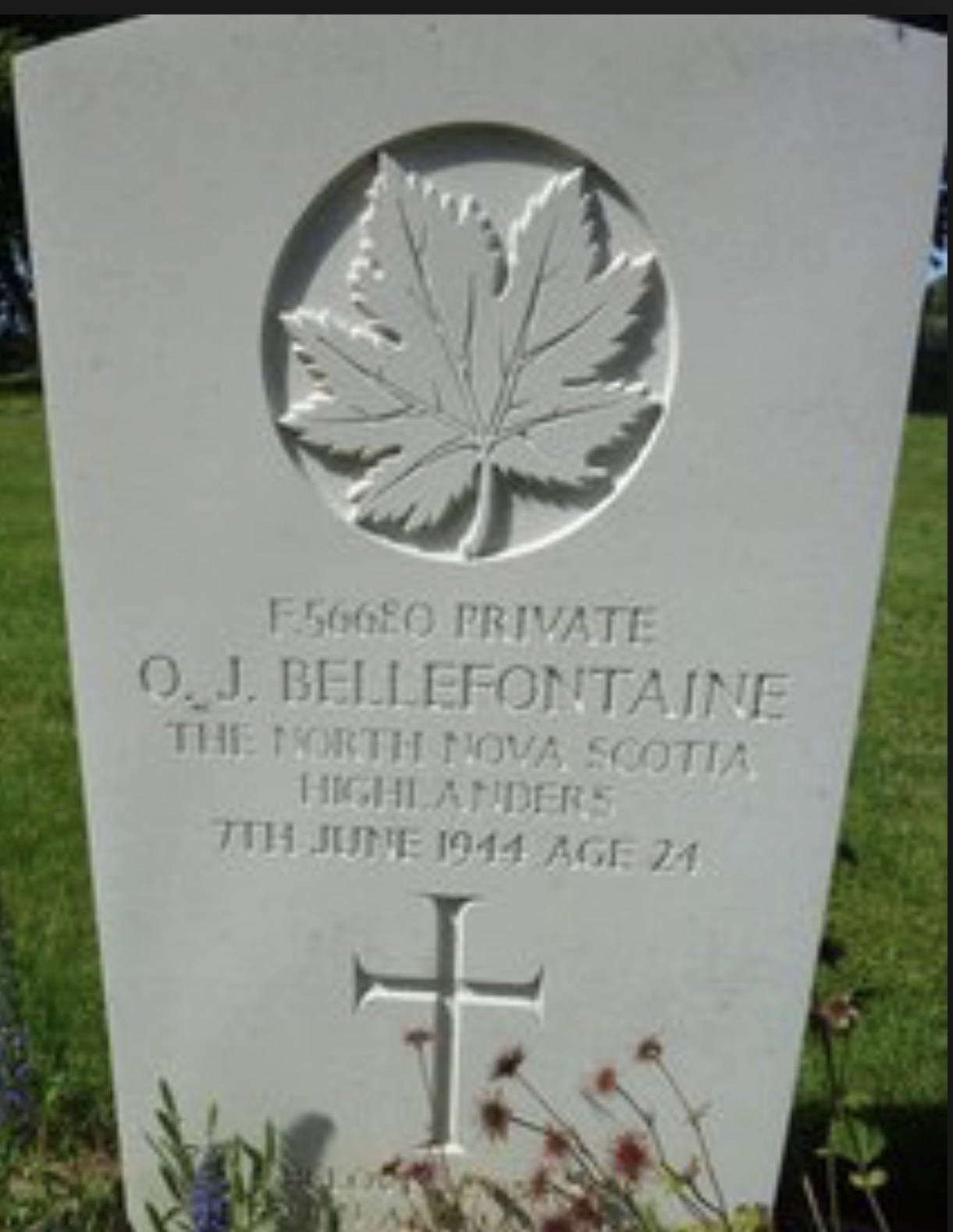 Introduction: As far as Evelyn Muise (a retired teacher who now lives in Yarmouth) knew, her uncle Oswald Bellefontaine (from West Chezzetcook) had been killed landing on Juno Beach on D-Day in June 1944. But in an extraordinary turn of events on a trip to France in 1984, she learned what had really happened to her uncle. Here is her story in her own words.

It starts in 1984, when I was in France to study for a month. I’m a retired teacher.

They told us we were going on a field trip to Normandy. I was excited because I knew my uncle was buried in the cemetery there. If only I could go there and find his grave, I’d be very happy.

We arrived at an abbey that the Germans had used as a regional headquarters. Jacques, our guide, got on the bus, talking about how grateful the local community was to the Canadians who had liberated them from the Germans. He pointed towards a village he called Authie—and I remembered that after the war, my grandparents had got pictures of my uncle’s grave from someone in Authie—maybe I could learn more!

I grabbed him as we got off the bus, and told him about my uncle, and about the picture of the grave.

“What was your uncle’s name?”

“My dear woman, we’ve been looking since D-Day for the family of your uncle, we wrote to the government, we wrote to parish priest, but we never got an answer.”

And then came some totally surprising information.

“Your uncle did not die on Juno Beach. Your uncle was assassinated.”

“I’m sorry, what do you mean? Assassination is a strong word.”

“Madame, it’s the only word to describe what happened to your uncle. He and some others got through the German fire on the beach, and made their way along the coast. Your uncle had been wounded in the leg, but not severely. A family in Authie took him in, took care of his wound, and fed him and the other soldiers. Your uncle was the translator for them. But then the Germans captured them, lined them up, and executed them.”

I was shocked at this news. I had always been told that he was killed on the beach.

“There’s a gentleman who lives not far from here, it’s his family who took in your uncle. Would you like to meet him?”

And within a few minutes, I was talking with Jean-Claude Alaperrine, whose family had sheltered my uncle. He told me the story, and then took me to the Beny-sur-Mer Canadian War Cemetery,where we found my uncle’s grave. My uncle had first been buried in Authie. But then the French government gave land to Canada to set up a cemetery for the Canadian soldiers who died on Juno Beach, and they moved his grave.

My family has been corresponding and visiting with Jean-Claude every since. I think he’s come to Canada several dozen times to see us and his good friends in Quebec. We will never forget what these kind people did for my uncle.

[Editors’s Note: Oswald Bellefontaine was the son of Stephen and Mathilda Bellefontaine of West Chezzetcook. According to Howard Margolian’s book, Conduct Unbecoming: the Story of the Murder of Canadian Prisoners of War in Normandy, in June 1944, troops of Germany’s 12thSS Panzer Division “Hitler Youth” executed more than 150 captured soldiers of the 3rdCanadian Division in a series of massacres. After the war, a Canadian military court tried one German officer for these war crimes, Brigadefuhrer Kurt Meyer. Meyer was convicted and sentenced to death. However, Canadian Major-General Chris Vokes commuted his sentence to life imprisonment. He was imprisoned in Dorchester Penitentiary in New Brunswick, moved to prison in Germany, and finally released in 1954. Meyer died in 1961; 15,000 people attended his funeral in Hagen.]