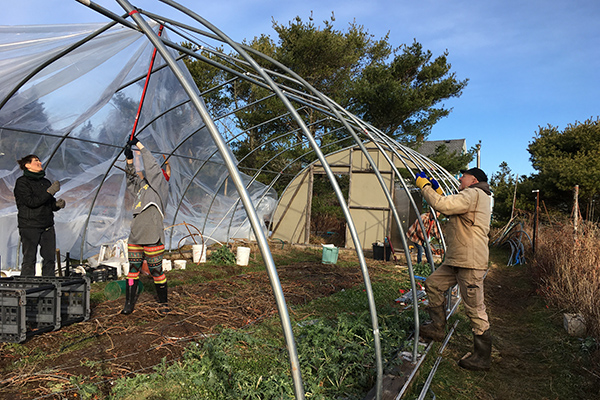 At a Crossroad: Rebuilding after Dorian

In the last issue, Jim Turner described some of the organic farm strategies he uses at his Nova Bluewater Farm in DeBaies Cove. This month, we continue the story with more about the growth of the farm.

Farm production is still at about 75% field crops but Turner says, “The greenhouse allows me to extend my season and lets me to grow better tomatoes and cucumbers, which are popular crops. In the greenhouse I can plant tomatoes by mid April and be harvesting by Canada Day, with the same vines often continuing to produce until Thanksgiving.” Each season, he grows about 15 varieties of tomatoes. There is always a different mix with about 10 that are constant customer favourites.

In September of 2019, strong easterly winds during Tropical Storm Dorian, snapped most of the metal ribs of both greenhouses. Turner described the experience this way  “After initial assessment of the damage, several neighbours and friends came to a work party to salvage what could be fixed. Other neighbours provided food and moral support to make the work party a success. We worked all day, but unfortunately the damage was just too great to repair.”

Turner says he debated whether to rebuild. “When we lost the greenhouse, it was real crossroads for me. I’m getting older and had to ask is it worth it rebuild? Is the weather going to continue to get worse? It’s a big expense for productivity that will take a couple of years to pay back.”

He considered the option of scaling back, but that would limit productivity. “With only one greenhouse, I wouldn’t be able to use my current system of rotating crops. We don’t want to grow plants from the same family in the same greenhouse two seasons in a row. That rotation breaks the lifecycle for certain diseases and pests. Two smaller greenhouses wouldn’t save much of the replacement cost, and aren’t big enough to be efficient for what we produce.”

After a lot of reflection over a couple of weeks, he decided to rebuild and continue. “I still like growing vegetables and it is part of my identity. And I’m still fascinated by the fact that a seed has all the information that it needs to make vegetables out of air, water, dirt and sunlight. I grow a lot of different crops and each has its own technique and requirements. What I love about farming is that there are always new challenges and things to learn.”

Turner works the farm on his own for the most part. But for the last couple of years, he has had summer students. He hopes to do that again as it makes a difference and can be a great opportunity for the right person.

Of course, there are downsides to farming, particularly having to be out every day, in all weather and conditions. But Jim says it’s worth it. As Jim sees things, “It is ultimately rewarding. I like growing our own food, knowing that it is all natural. It gives me a connection to nature.”

Jim Turner is a horticulturist and certified organic farmer on the Eastern Shore. Learn more at facebook.com/Nova-Bluewater-Farm or j[email protected]