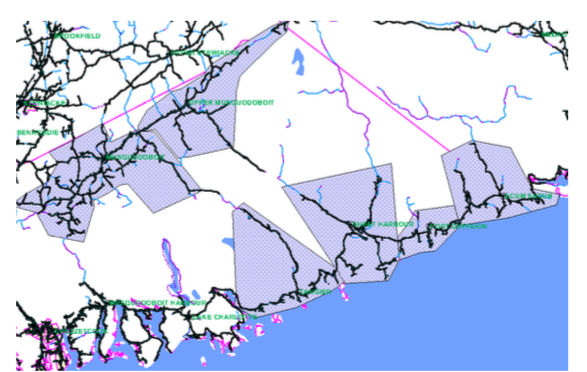 Develop Nova Scotia, the agency in charge of bringing high-speed Internet service to rural Nova Scotia, today announced that Bell Atlantic would be providing fibre service to 4,890 homes and businesses on the Eastern Shore. The areas are shown in light purple on this map from Bell Aliant.

The total cost of this second round of funding for rural internet service  is $18,856,000, of which $10,371,000 comes from the Nova Scotia Internet Funding Trust, and $8,485,000 from Bell Aliant. (Develop NS has an expansive definition of the “Eastern Shore,” including all of District 2 Councillor David Hendsbee’s riding, and much of District 1 Councillor Steve Stretch’s. The full list of communities is below.)

District 1 City Councillor Steve Stretch welcomed the long-awaited announcement with a Facebook post to Internet Equity for all HRM, where people suffering from no- or slow-Internet connections have been fighting for better access: “The approval of this application is the news we have all been waiting for, and was the preferred choice of HRM, and your Councillors! The hard work of a lot of people have led to today's announcement. Direct fibre to the home for our entire rural region!”

The press release from Develop Nova Scotia noted that it will not be until the summer of 2022 that all the homes and businesses in this round will be connected. In a phone interview today, Monique Arsenault, Director of Innovation at Develop NS, said that Bell Aliant was working on the schedule of the build-out. “Bell Aliant will be refining the schedule for the actual physical build over the coming weeks,” Arsenault said. “We will share it with the public as soon as it becomes available.”

In an interview published in the Cooperator in June, Arsenault explained the agency’s goal:  “Our mandate is to reach that greater that 95% access goal, and we’ll be pushing for 100%. If this round still leaves some areas out, then we’ll either do another around, or look at what other tools we could use to make it happen.”

In a Facebook post this afternoon,  District 2 Councillor David Hendsbee wrote that he understood "the disappointment of several communities between East Lawrencetown to Owl’s Head that are clustered along the various coastal loops or peninsular roadways along the western side of the Eastern Shore." He called for another phrase or Round 3 "to get further extensions off the Highway 7 corridor...I will be lobbying that they do...sooner the better for all.

For people and businesses with poor Internet service now, Arsenault also said that Develop NS had just added a new form that will allow people to register their complaints, and get onto the map of communities that need better service. “We’ve said we will push as close to 100% as we can,” she said. “We’re looking at whether we can extend some of the projects already underway, or work with the nearest providers, to figure out the best solutions to get service to the remaining areas.”

Under Develop NS’s regulations, rural residents will not pay more than urban for the same product. “We do have criteria that require competitiveness of pricing,” Arsenault said. “A product in a rural area has to be priced the same as a comparable product in a city center. We have service delivery agreements that we will monitor to make sure that the providers are delivering the connection speeds they promised.”

But even with better infrastructure and access, people may still be unable to pay monthly fees of $100 or more. The province does not provide funds to subsidize Internet charges. The federal government has a program called “Connecting Families” under which families with incomes below $31,000 a year can get Internet access for $10 a month, with the government paying the rest. However, this program is only available to families who are receiving the maximum Canada Child Benefit who have received a letter authorizing them to participate. Arsenault said that Develop NS was aware of this problem, and was “engaged in ongoing conversations” with the various provincial agencies about possible solutions.

Access to high-speed Internet service became an acute problem for many families this spring when the Covid-19 lockdown left online education as the only option.

Here’s the list of communities who will be getting fiber service from Bell Atlantic between now and the summer of 2022.