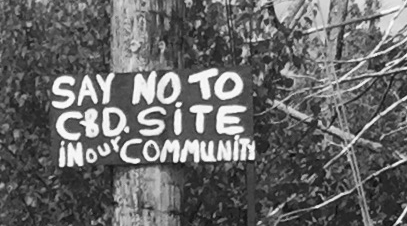 I am writing on behalf of the n to express our adamant opposition to the application to rezone the 14.7 acre portion of the property on the north side of Highway 7, west of Parker Lane, Porters Lake (PID 40740276) as described in Case #19800.  We see this as yet another example of environmental racism as the C&D-2 Material Processing Facility amounts to just another dump planned for our community. We in the African Nova Scotian community have a long history of the location of dumps near or in our midst.

Environmental racism as defined in a report by Global News, April 29, 2015 by Natasha Pace is “Environmental racism essentially means that hazards, like toxic waste, pollution or dumps are placed near low-income or minority communities.” Dr. Waldron stated “We talk about racism in employment, we talk about racism in labour, we talk about everyday forms of racism, and this is just another aspect of systemic racism, historic racism that has been happening in this province for years” (Global News, April 29, 2015).  The location of dumps near or in Black or marginalized communities is, in our opinion, a clear violation of human rights. We are well aware of the historic struggles of residents in Africville, Boat Harbour, Lincolnville and Harrietsfield with environmental racism. This contention of environmental racism is supported by the introduction of a bill in the Nova Scotia legislature by MLA Lenore Zahn, she stated “The bill calls for a panel to be struck consisting of members of the provincial Human Rights Commission and members of the Minister of Environment’s Roundtable on Environment and Sustainable Prosperity” (Global News, April 29, 2015). Zahn stated “There is (sic) a disproportionate number of toxic waste sites and dumps in racialized communities, backyards, and this has been happening for many, many years, so really this is long overdue,” says Lenore Zann, NDP MLA for Truro.

Dr. Wayne Adams elected in 1993 for the riding of "Preston" on a campaign message to stop the growth and future development of municipal dumps near low income families, he made a cleaner and safer environment his main platform plank “http://www.smu.ca/academics/archives/wayne-a.html”. This demonstrates that the Preston communities have been actively fighting the location of dumps in and near their communities for years. We all remember another attempt by HRM to locate a dump near our communities, “In 1992 a short list of three proposed sites was announced. All three potential host areas immediately began to organize protests against the landfill (Ryan 2000). One of the proposed sites was at East Lake near North Preston and the Halifax International Airport. Although according to one study the East Lake site was ranked below the other sites based on environmental and economic factors, at seven kilometers, it was farther away from residents than the other sites, making it the leading contender (Dann 2000). It was subsequently selected as the preferred landfill site. However, the closest residents to the proposed East Lake site belonged to the African-Canadian community of North Preston, settled in the 1840s by black Loyalists- Canada's oldest continuous black settlement. The residents contended that the siting decision was consistent with Nova Scotia's historical practice of siting landfills adjacent to African-Canadian communities (Dann 2000). Wayne Adams, a local African-Canadian activist and former Halifax County councilor, framed the East Lake landfill selection as environmental racism. Vowing to stop the practice of siting landfills near racial minority communities, he entered provincial politics (Halifax Chamber of Commerce 2005) (Refraining Garbage: Solid Waste Policy Formulation in Nova Scotia by Travis Wagner, Canadian Public Policy, Vol.33, No.4, Dec, 2007, pp. 459-475, University of Toronto Press, p. 464).

It is not difficult to understand our total opposition to the rezoning application referred to above when one considers our history and struggle with dumps in or near our community.  The Canadian Public Policy article above, regarding the 1992 dump mentions a distance of 7 kilometers from our communities, yet the property in the rezoning application is only a 3 kilometer radius from East Preston.

As if this is not enough of an insult to our residents, we learned of a proposal to move the location of the C&D-2 Materials Processing Facility or dump, to a parcel of crown land on the south side of Hwy 107 which is immediately across from Exit 17 to East Preston. This move would put the dump in East Preston and near Lawrencetown. It seemed to us as though, through some convoluted reasoning, that to squelch the uproar in one community the answer was to locate the site in East Preston. This scheme failed when area residents expressed their outrage to local, provincial and municipal representatives.

Another example of our communities struggle with dumps was the development of the North Preston C & D site approved at a meeting of the Marine Drive Valley and Community Council meeting on May 28, 1997.  At a meeting of the Lake Major Watershed Advisory Board meeting on May 24, 2001, the minutes indicate, that a presentation mentioned that “there has been a project proposal in the works since l997, to establish a Construction and Demolition Debris facility and quarry in North Preston” (p.1). This meeting was to consider a proposal to put a road across lands owned by the Halifax Regional Water Commission.

This C & D facility was restricted in what materials it could accept by Ministerial Order as recorded in the Royal Gazette on March 8, 2002, Volume 26, Number 5. The Preston C & D facility closed in 2003 after the municipality placed an injunction on the property dealing with it as a public safety hazard.  Waldron  (2014, p.15) provided email information from Mr. Peter Geddes, staff member Nova Scotia Environments, Bedford Office which indicated, “The principle regulator of the site is HRM, having issued the operating permit for a “recycling facility” that permitted the company to exist and to operate in a manner in contravention of the Environment Act and regulations hence the issuance of the Ministerial Order.”  Waldron (2014, p.14) reported the following residents’ concerns:

While Waldron’s report and other documents reveal more details surrounding this nasty little mess, the foregoing points serve to indicate our underlining suspicions when dumps are proposed for our communities. What was ostensibly approved as a “recycling facility” soon morphed into a disposal facility with the materials still buried adjacent to a community centre and a lake. Waldron reported that Mr. Geddes indicated “the municipality approved the operation of the recycling facility previously and is responsible for any clean up” p.16.  The residents of North Preston are still waiting for this clean up, very similar to the homeowners in Harrietsfield.

It is also important to realize that in the historical record the original grant for Preston stretched from Halifax Harbour east to the shores of Porters Lake. Over the years the boundaries of the present Preston communities have been whittled away and shrunk to what we have today. We have no intention of standing idly by and have a dump located adjacent to our communities.

We have documented three examples of locating dumps in or near our communities, one in 1992 near East Lake in North Preston, another in 1997 in North Preston and now in 2016 the proposal to locate a construction demolition processing facility in Porters Lake adjacent to East Preston. The Porters Lake facility being the one that was proposed for relocation to East Preston opposite Hwy 107 Exit 17.  If we accept Waldron’s definition of environmental racism, we are left with an inconvenient truth as supported by the aforementioned documented examples.

One would need to be naïve not to recognize this rezoning application for how it appears to the residents of our community given their long standing battles against environmental racism.  We have waited until now to formally register our opposition in the faint hope that reasonable people would find a location for this C&D-2 facility in an appropriate site, such as an industrial park, away from any residential community. We can wait no longer as the health and wellbeing of our residents is at stake.

We are resolute in our position that the proposed C&D-2 Materials processing facility is not compatible with our communities, a nuisance to the residents, contrary to our public interest and a threat to the value of our properties. We feel it can be argued that this facility, as an act of environmental racism, contravenes the Nova Scotia Human Rights Act. As stated in Section 4 of the Act, we feel this egregious example of discrimination has “the effect of imposing burdens, obligations or disadvantages on an individual or a class of individuals not imposed upon others or which withholds or limits access to opportunities, benefits and advantages available to other individuals or classes of individuals in society. 1991, c. 12, s. 1.”

We respectfully request and expect that you and your colleagues in the HRM planning department will carefully consider our position on this rezoning as describe in Case 19800 and recommend to the Harbour East-Marine Drive Community Council and the HRM Council that the application be denied.