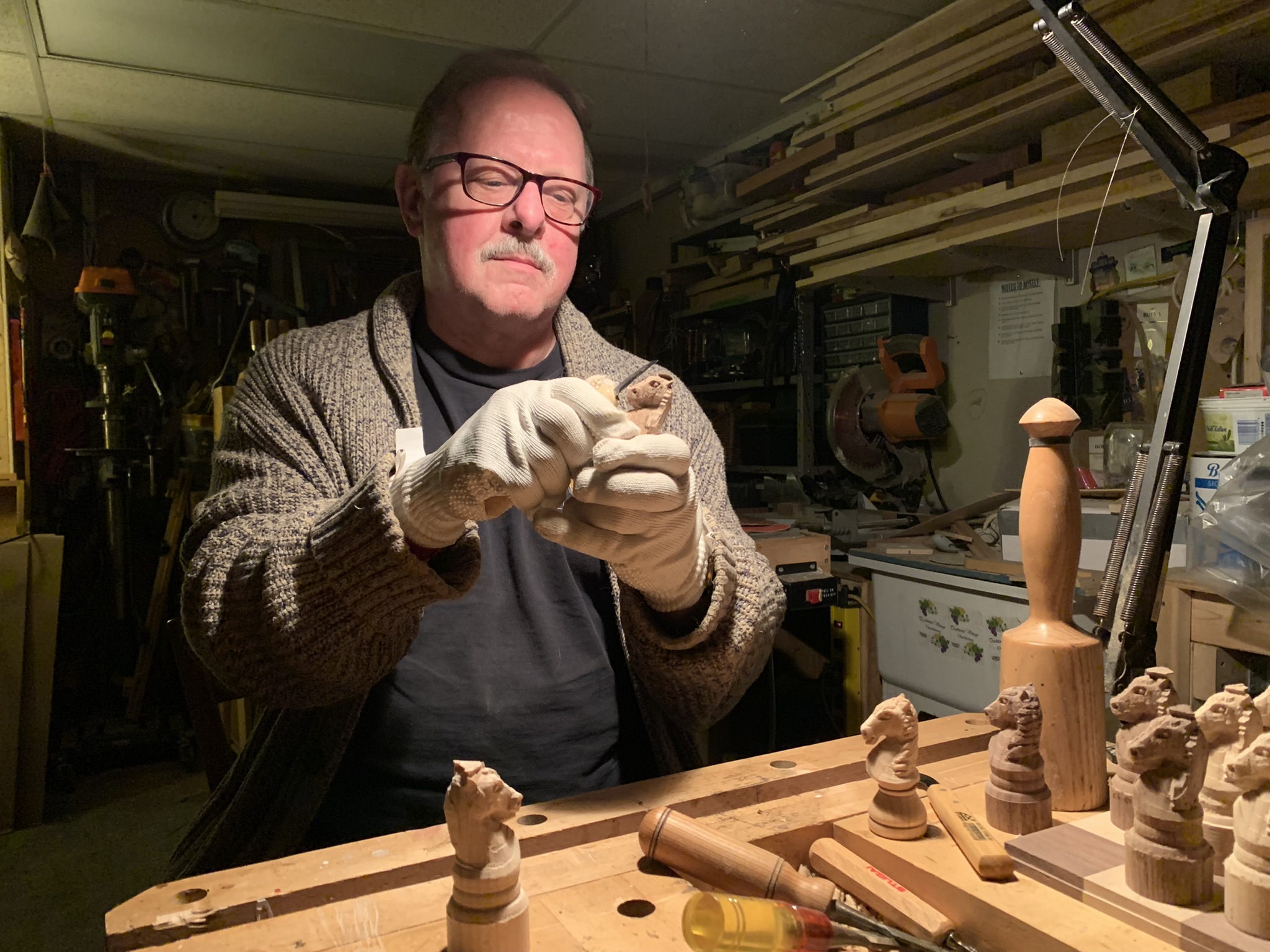 When Chess Nova Scotia (https://www.chessns.ca) commissioned West Chezzetcook woodworker Stephen Parsons to design and produce a custom chess set, no one expected it to be a two-and-a-half-year project.

The organization first approached Parsons was in late 2019 to create a set for the PawnWise All Ages Chess Festival (chessns.ca/portfolio/pawn-wise-the-atlantic-all-ages-chess-festival/), originally scheduled for July 2020. Like so many other events, the festival had to be postponed, finally happening just this past summer. The delay resulted in a very different project than originally conceived.

Festival Coordinator Roger Langen provided some background. “Our event was bringing international chess celebrities to Halifax,” Langen said in an interview, “and I wanted to highlight Nova Scotia artists. Some of the trophies were made by woodturner, Gordon Marshall, who recommended I connect with Stephen to develop a chess set. It has been a collaborative and evolving project. The board received rave reviews when it was displayed at Pawnwise.”

Parsons incorporated multiple Nova Scotia elements in his design. “The board is made with Nova Scotia walnut, maple, and cherry,” Parson told the Cooperator. “On the top face of each side of the skirt is a graphic symbol of a contributing culture that has been instrumental in the development of Nova Scotia. There are Scottish, French, Mi’kmaq, and African heritage icons. On the outside faces of the skirt are inlays of polished Nova Scotia agate.”

The pieces are made from maple and walnut. They are sized and weighted to regulation standards. “I added weight by using lead shot and de-commissioned Canadian pennies,” Parsons said. “The sponsor appreciated this approach because he felt that appropriately represented both battle and wealth vs. scarcity, two elements that factor into chess history and strategy.”

Parsons has enjoyed woodworking since he acquired skills from his father at an early age. He says he thrives on collaboration. He explains how the signature knight form evolved. “I immediately knew that I wanted to do a knight representing the Sable Island ponies with their signature long, wind-blown manes,” he said. “Initial designs by a local carver eventually led to a modified 3D model I created with an NSCC student. That model was used to carve rough pieces on a CNC (computer numerical control) machine, which provided a consistent form. I finished each knight using hand tools to give it each some polish as well as originality – and attitude.”

Many of the design and construction elements were made possible because of pandemic delays. Parsons is confident that he would have delivered a very different product if the event had gone according to schedule.

When asked how the project changed, he provided several examples. “When I started the project, I didn’t have access to some of the tools and technologies that were used in the creation of this chess set, like the CNC carver. and benefits that happened. The delay also presented some alternate design options. For example, one of the cultural icons to appear on the skirt of the chess board, the African Nova Scotia flag, was officially unveiled only in February 2021.”

Chess Nova Scotia has an option to purchase or sell up to 8 more of the Nova Scotia Sable Island Knight chess sets. Parsons and Langen agree that the project is still evolving. Future sets will likely see changes influenced by the learning and feedback from this project.

[Note: The subject of this article is the life partner of the author.]