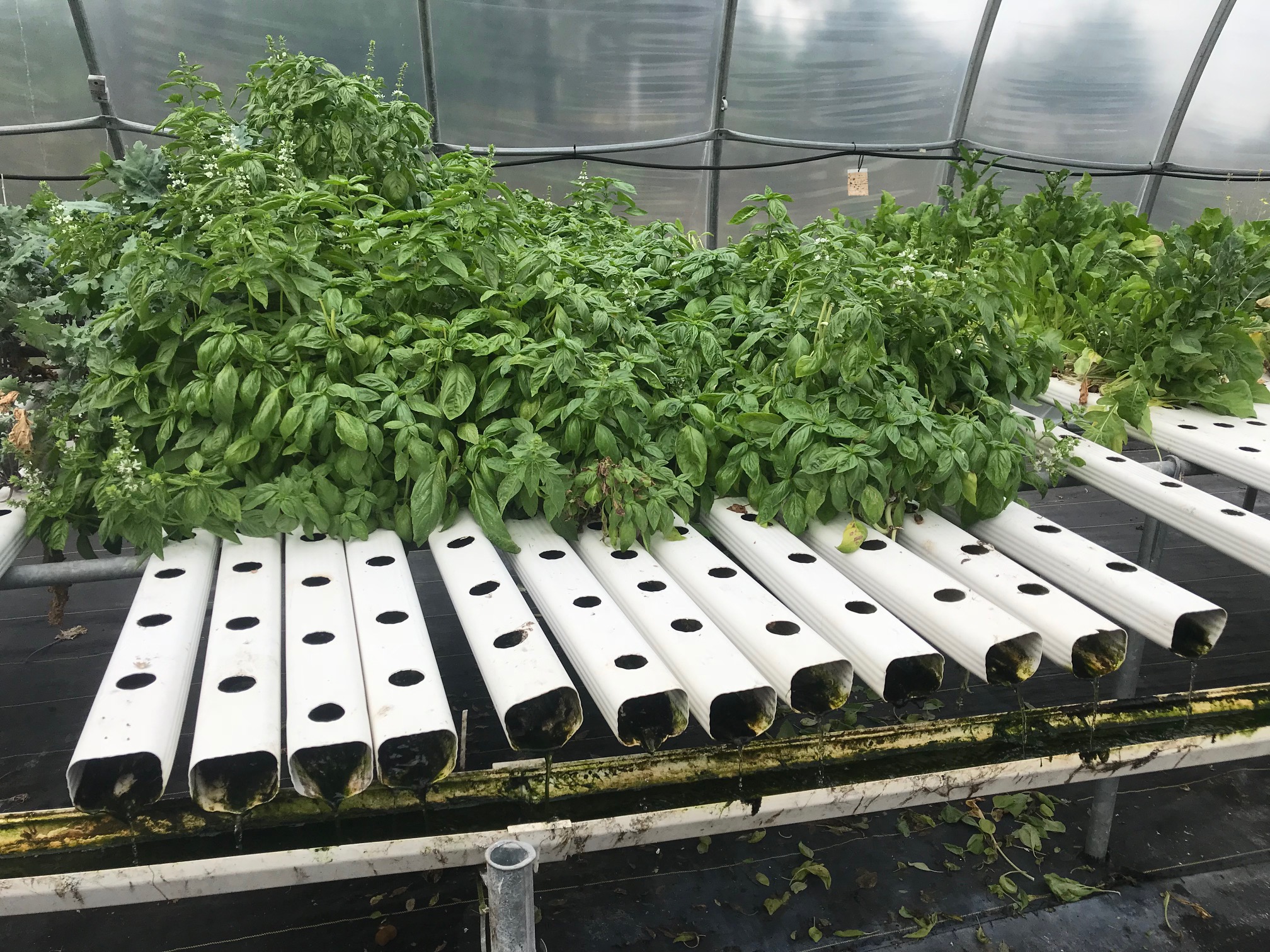 Farming Without Soil In Lawrencetown

Anyone who’s ever tried to grow anything along the Eastern Shore knows how unwelcoming the thin rocky soils can be. But Frank Cheevers doesn’t worry much about the soil at his hillside farm on West Lawrencetown Road that he calls Skeldale Farm.

He’s growing plenty of food, but the roots of his arugula and spinach never touch the earth: his entire production comes from a sprawling greenhouse housing hundreds of yards of piping feeding liquid nutrition to his produce.

After walking me through the greenhouse, he takes me through his other outbuildings that house a flock of meat turkeys, a flock of egg-laying hens, some meat hens, and a barn with two adult pigs and more than a dozen piglets. And he’s got a cow in his next door neighbor’s pasture.

Cheevers was born in the Lake District in England, and remembers visiting a farm as a child in 1955, but it took him a while to get around to farming in Nova Scotia.

“In 1982, I married a Halifax girl who came over to England to live,” he said. The couple ran a pub together in northwest London after doing 3 months training. “I looked after the beer, and Linda looked after the food. We won prizes for our food, and for our cellar too.”

But after five years, Linda got homesick. “You can the girl out of Canada, but you can’t take Canada out of the girl,” Cheevers said. They lived in Alberta for 8 years before coming back to live in Eastern Passage for another 22 years.  He continued working in Alberta for many years, commuting back and forth on a two weeks on/two weeks off schedule. The schedule was tough, 14 hours a day, and a 14-hour commute, but his pay as an engineering technician was “obscenely generous.”

Cheevers jokes that “Everyone should have three careers—but I’m beyond that.” He bought his hydroponics farm in a package deal, complete with greenhouse, piping, and pumps in 2006. “I had started clearing the land for the greenhouse by hand when a friend came by and said, ‘What the hell are you doing.’ My friend came back with a tractor, and I eventually bought a John Deere that’s been my life-saver.”

Cheevers describes his produce as “hydroponically grown, pesticide free. All the nutrients are natural ingredients,” including calcium or ammonium nitrate, espsom salts, potassium bicarbonate, and fish meal. A pump circulates the formula slowly through the system of pipes. He starts his plants out in a medium called Oasis cubes, a growing medium that has no chemicals or fertilizers. The cubes come in sheets of 276, each with a tiny hole in the center.

“You just drop the seed in the hole,” he explained. “When they get about 2 inches high, you pop the cubes apart, and put them along the holes in the pipes. The roots reach down through the medium and start pulling nutrients from the slow trickle running along the bottom of the pipe.”

He sells to the public at the Musquodoboit Harbour Farmers Market on Sundays, where his wife makes delicious hot breakfast sandwiches on the side. He also sells his produce at the pop-up market at Cole Harbour Heritage Farm on Wednesday afternoons. He supplies the Farm Restaurant, the Acadian Museum Restaurant, and Vegetorium. Sounding like so many small farmers, he says, “Ideally, I’d like to double my sales.”

Over a cup of tea, Cheevers offers a simple explanation for all his work: “I get bored easily.”  But with pigs, chickens, turkeys, a cow, and an industrial-scale aquaponics greenhouse, if there’s one thing he doesn’t have to worry about, it’s getting bored.