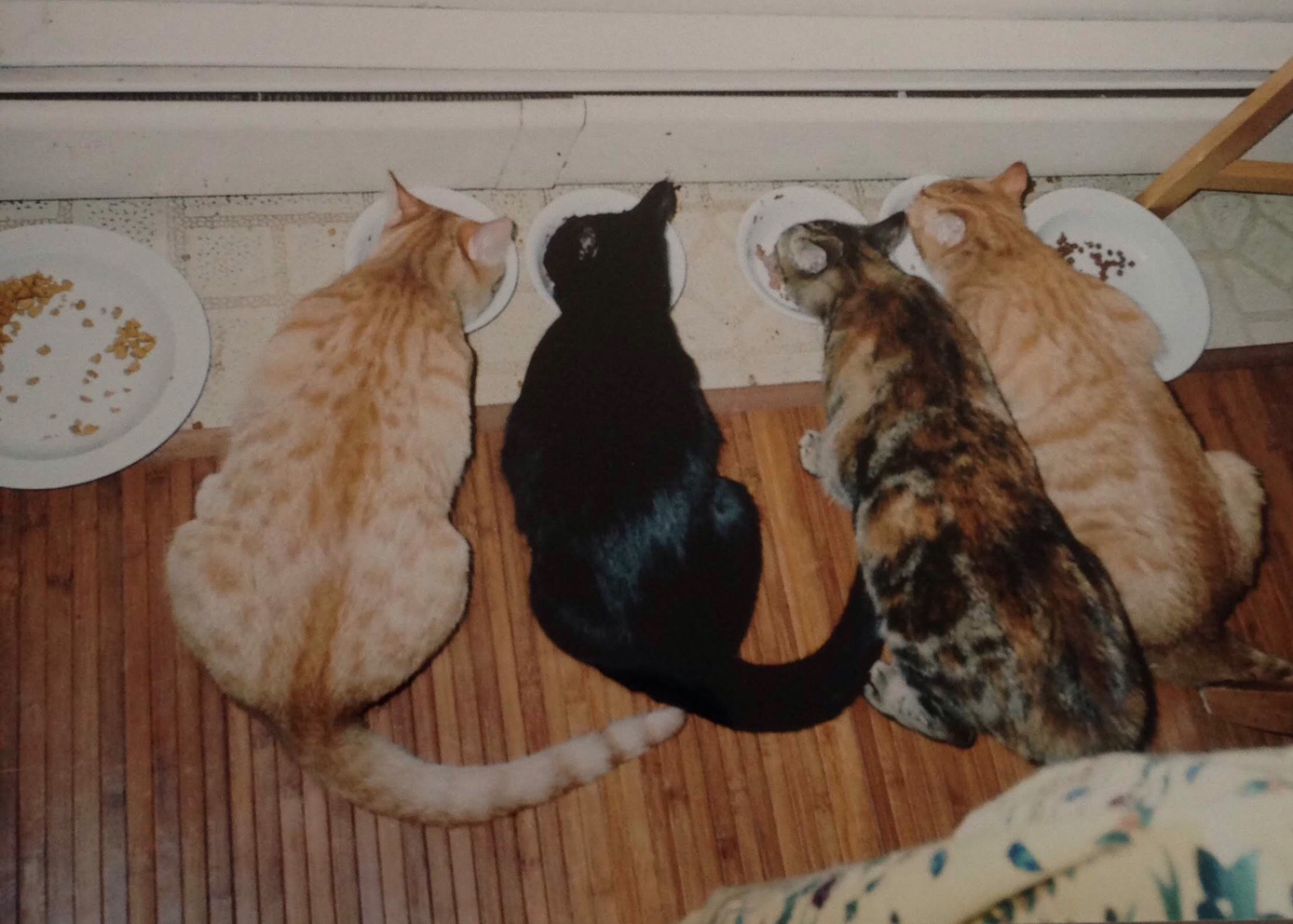 It was a dark and stormy night. She came in to my house soaking wet and howling. When my neighbours released her, she immediately climbed to the top of the curtain rods in the guest bedroom

What she didn’t know was that her three babies were waiting for her under the bed.  I knew there was no reasoning with her, so I shut the guest room door, said a little prayer, and went to sleep. So began the saga of adopting five feral cats.

Actually, the story begins a few days before, when my beloved tabby Chi went out the door and did not return. Chi was the family tabby cat, small and delicate with white bib and paws. She stuck her nose out on a damp October night, with the wind rustling the leaves. She hesitated, slipped silently into the wet autumn darkness, and I never saw her again. When she wasn’t at the patio door waiting in the morning, I knew it was not good news. I was grief stricken.

A few days later my neighbour called.  A beautiful stray tabby cat with three mature kittens had moved in under the woodshed. With some difficulty, she captured the kittens, one by one.  As they arrived, I secured them in the guestroom upstairs, where they promptly hid under the bed. On a following night, the mother cat was finally trapped. Mama was wet and panicked by the time she arrived in her cage in the middle of the rainstorm.

Over the next few weeks, enticing the four out from under the bed was the project. First came a little black daredevil we named BB Lynx (BB for Brass Balls), next a shy enigmatic orange tabby, Pi, and last, a fat little orange bruiser nicknamed Mr. T.  Mr. T eventually became known as Cuffers, for reasons you can probably guess.

The day after this adventure, I was commuting to work. It had been a bit of a storm and in front of me, stopped at the lights, was a white panel truck.  The back doors advertised their business; dealing with storm damage. It said “CHI Home Restoration”.

I stared at it blankly for a moment or two…C..H..I Home Restoration.  Chi!  My little cat who had disappeared only a few days previously, was named Chi! And my home was certainly on the way to being restored! Coincidence?  Synchronicity? An angel cat?  You decide. (To be continued)