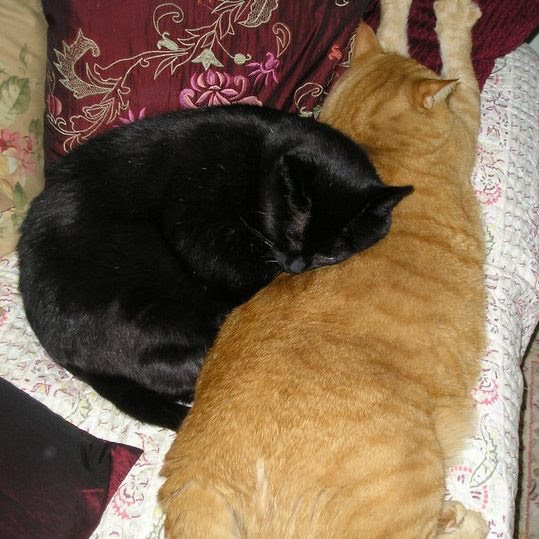 Summary of the true story so far: After losing the family cat, I adopted an abandoned mother cat and three kittens. They were kept in all winter. Spayed and tamed, the saga continues in spring.

The first time the cats went outside, I felt like a mother hen, nervously trying to herd her brood. The phrase “Like herding cats” is appropriate here. Excited to be outside, they nosed and sniffed and prowled. Despite my anxiety, all went well, except for one glitch.

The neighbourhood had a black stray male, “Spot”, who had been hanging around for a couple years. He was trapped, neutered and released in the fall, at the same time as my cat family. He promptly disappeared. We thought he was gone for good, as there was no sign of him, all winter.

Not so, it turned out. There he was, a lone sentinel under the big old spruce tree, watching me, the mama cat, and the kits; one of the kits looked exactly like him. Hmmmm.

Nervous that he would fight with them, I tried unsuccessfully to chase him off a few times. Eventually, I began feeding him again on my back steps. One of the kittens, now really an adolescent cat, developed an affection for him. Pi didn’t want to come in when the stray was outside. Pi would put his paws up to the patio door window, with Spot on the other side.

One fine warm day, when I was putting cat biscuits in Spot’s little dish, he was right there, by my hand. He put his little black head right down in my hand, for pats. Be still, my beating heart!

Thus was the instant adoption of the fifth member of my cat family. Spot had little cute fangs and loved to chase his tail in the bathtub. In the neighbourhood, we had called him “Spot” for the little white spot on his chest, but he needed a real name. I thought about “Frisky” but he has a lisp (due to the protruding teeth) so “Fwisky” it was, later to become “Gentleman Fwisk” as he was such a polite sweetheart of a cat.

Gentleman Fwisk looked after the black adolescent rebel and hellion, BB Lynx, chaperoning her back-and-forth across East Petpeswick. He befriended the least popular kitten, Cuffers, putting up with his shenanigans like no one else would. He cried and cried at night, until I coaxed him on my bed. Then, he was the number one cat in the family, until he sadly had to cross the rainbow bridge, one year at Christmas time.

After he left, I was haunted by finding him in the form of another black cat with a white spot on his chest. Finally, I spoke to him in my mind, and said “Fwisky, I am going to stop looking for you. If you come back, you will have to make it loud and clear, and show up on my door step.”