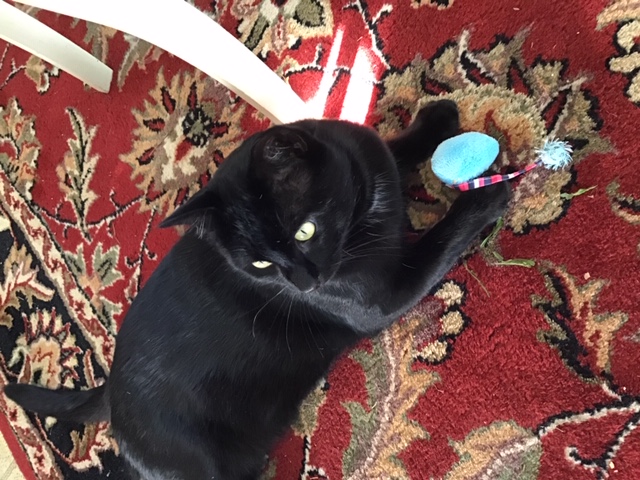 The story so far: I adopted five cats, a mother with three kittens and the presumed father. That cat, black with a white chest spot, was the only one I had a pact with, after he died. “Come back, if you can, and let me know it’s you.”

One by one, over the next fourteen years, the five cats each crossed the rainbow bridge. Finally, there was only Cuffers, the fat timid orange kitten who grew into a massive twenty-pound cat. In that last year, he realized his dream of being noticed. Burying his head in my arm, cuffing me for treats, perching in his power spot at the top of the stairs, waiting for attention, or peering out his cat door surveying his realm; he was finally the number one cat. Then that summer I found out he had severe kidney disease. We had to say goodbye.

Cuffy was buried in the garden, right beside his mother whom he adored. The house felt empty; no huge orange striped cat sprawling on the rug in the evenings, tail twitching. No fat paw cuffing me to get his breakfast in the mornings.

Right at that time, another cat mysteriously arrived. I startled him one night, jumping off my garage roof. He promptly bolted out of sight. Hardly ever visible, he hid behind the garage waiting for the food I put out. It took patience just to glimpse him slipping under the garage door. Bit by bit as I talked to him in his hiding place, I might see a little black head peeking out from the shrubbery. I named him Shadow.

Fall passed and winter came. One sunny winter day, I glimpsed him out of my stairwell window as he snacked on some salmon left on the garage roof. I could finally see that Shadow was a beautiful black cat, with...a small white spot on his chest!

Through that winter and spring came all the milestones of growing trust: first touch on the fur, first entry into doorway, first meal in the kitchen, first tentative living room exploration, and the first time I could close the door without him panicking. He would sit outside, nearby, when I had tea in the garden, but he remained living outside. As summer passed, the one-year anniversary of his arrival approached. Then, on the night of hurricane Dorien everything changed.

The day before the hurricane, I dreamed I felt a cat sleeping beside me on the bed. I went out and bought a cat litter box, just in case. Shadow was nowhere to be seen. That night the storm ramped up. During the eye of the hurricane I heard the sounds of a chainsaw; the road crew was clearing a fallen tree. I went out on the stairs and there in the storm was a wet terrified cat. “Come Shadow,” I called. He ran up the stairs and into the house. I shut the door, and so it began.

We weathered the hurricane that night, together. He slept beside me on the living room floor. Within a week, he was sleeping pressed next to me on the bed. He followed me everywhere, upstairs and down. Going to the woodpile, putting out the garbage, it didn’t matter. We were joined at the hip. I taught him to use the cat door and he came and went freely, partly mine, and partly wild.

We had five short months of mutual adoration, until the Valentine’s Day weekend, when he went out at night and didn’t return. The Monday after Valentine’s, I dreamed I felt him jump on the bed. I reached out my hand with joy and caressed his head in the dark...and then I woke up. I was shattered with grief, as I knew he was gone. He had come to say goodbye.

I was lucky enough to find his body a few days later, where he had curled up under a neighbour’s cedar tree and died. I wept and took him home to bury.

We had a contract. I always knew in my heart that our time would be short, that he would leave unexpectedly, on his own terms. There will be other cats, but none with the magic of Shadow.