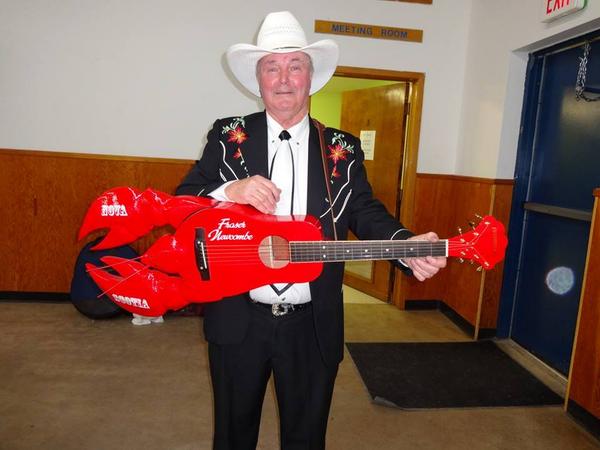 Fraser Newcombe is a living treasure, one of the Eastern Shore’s great musical ambassadors to the rest of the world. And after one look at Newcombe playing his unique blazing red lobster guitar, you’ll know exactly where Newcombe’s heart lies.

Newcombe’s been entertaining country music fans and dancers from his birthplace in Murphy’s Cove to TV shows in Branson, Missouri. Life in Murphy’s Cove, where Newcombe still lives, was full of music. Newcombe’s mother played the mouth organ. His father sang the old songs of Jimmy Rogers, and taught all nine kids how to step dance. There wasn’t much money, and no technology to speak of, but Newcombe describes those times as being “better back then.”

He learned how to play the guitar by watching others, like his uncle, who also played the fiddle. He still has the very first guitar he ever owned. His early favorites were the songs of Hank Snow, Boxcar Willie, and Johnny Cash.

Fraser started work at the ripe age of 12, hauling lobster traps and earning an honest wage of $84 a month, which he in turn shared with his mother to keep food on the table. Newcombe’s first band was a family affair, “The Newcombeers,” with his sister on guitar and vocals, his nephew on drums, and his brother-in-law on the fiddle. They played local events, from the Wildlife Society to the American Legion.

After playing solo for a while, Newcombe formed the band he still plays with today, “Fraser Newcombe and the Pick of the Crop,” with Jim Francis and Bobby Chippman. They played at music festivals and community halls around Nova Scotia and New Brunswick. Ship Harbour’s Donald Marks helped them get some special gigs, including opening for Johnny Cash’s brother at the Halifax Forum in 2008. (The Forum appearance prompted then-Fisheries and Aquaculture Minister Ronald Chisholm to introduce a resolution congratulating “Fraser Newcombe and his band for their success in the competitive world of music and the enjoyment they bring to listeners.”)

Newcombe thought a “lobster guitar” would fit the fishing culture of Nova Scotia, but guitar makers overseas kept turning him down. Finally he found Moncton luthier Don Fitzsimmonds, who agreed to take on the job. The guitar has been a hit ever since. People line up after the show to get a close look at the unique instrument, and to take a few selfies. But not everyone sees a lobster. Down south in Arkansas, Newcombe says, “They called it a crawfish!”

Last year in September, Mr. Newcombe took a tour of the USA with bass player Andy Crossan, where they played several TV shows in Branson, Missouri. Your next chance to see Newcombe play on the Shore will be at a tribute to another great Canadian musician, Stompin’ Tom Connors at Heritage Village in July.