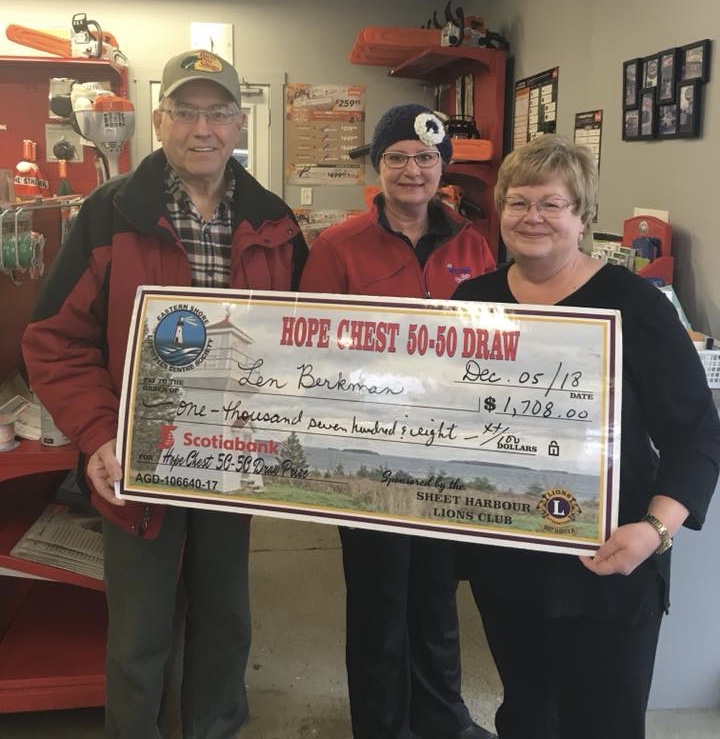 Supporters of building a new Lifestyles Centre in Sheet Harbour have had a highly successful year with their Hope Chest fundraising campaign, raising more than $20,000 with the help of an army of volunteers and the cooperation of local businesses from Ship Harbour to Moser River.

“We’re very excited about our program,” said Janice Christie, who’s headed up the fundraising committee for the Eastern Shore Lifestyles Centre Society. “The sustained level of participation shows how much support there is for building this facility.”

The Hope Chest fundraiser is a popular fundraiser offered in various communities throughout the province. To play, you register for a personal 'number for life'. Then every week, you can play a Toonie on your number, in one of two ways: you can go to one of 7 stores that have a small white Hope Chest on the counter, write your number on a sticker, put the sticker on the back of your Toonie, and put it in the Hope Chest; or you can play for several weeks in a row by putting an envelope with one or more bills inside for the number of weeks you want to play.

Once a week, volunteers visit the 7 stores, pick up all the sticker Toonies and the envelopes, and take them in to be counted and recorded.

“We’ve got it down to a science now,” Christie explained. “A team of three opens the bags from the seven vendors. We take all the toonies, and put them in numerical order on a spreadsheet, and then add in the numbers of people who pre-paid for more than one week. Then we do the draw for the four digit winning number using ping-pong balls. If we draw the number of someone who played their toonie that week, that person wins 50% of the proceeds for that week. But if the registered owner of that number did not play, then the money rolls over until the draw the next week.”

The other 50% goes to the fundraising committee that pays for supplies, stickers, and a 2.13% fee to the Amusement Regulation Board; the rest goes into the treasury for the Lifestyle Centre Society. At the Society’s gala fundraiser in October, Hope Chest coordinator, Susan Boutilier presented a cheque for  $10,000 to Senator Tom McInnis, ESLCS Board Chair.