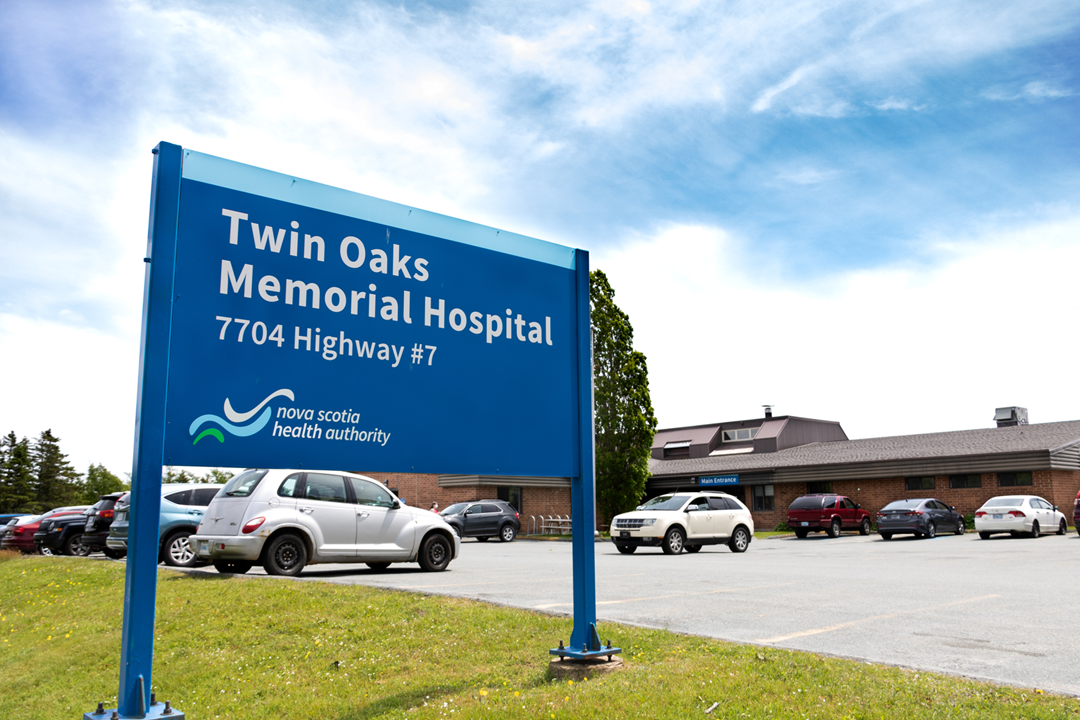 Closure data is typically released in the fall of the year, but the Cooperator has obtained closure breakdowns earlier than usual. The data cover the previous fiscal year (from April 2020 to March 2021), and the start of the current fiscal year (April and May of 2021).

Although closure rates have evened out a bit during COVID-19, the numbers for April and May point to closure hours going up over fiscal year 2020. The data for the first two months of this fiscal year (April and May) shows that ESMH is on track to strongly out-pace previous years at 1068 hours, already reaching more than half of the previous year. MVMH and Twin Oaks are at levels consistent with pre-COVID closures at 396.5 hours and 82.6 hours respectively. 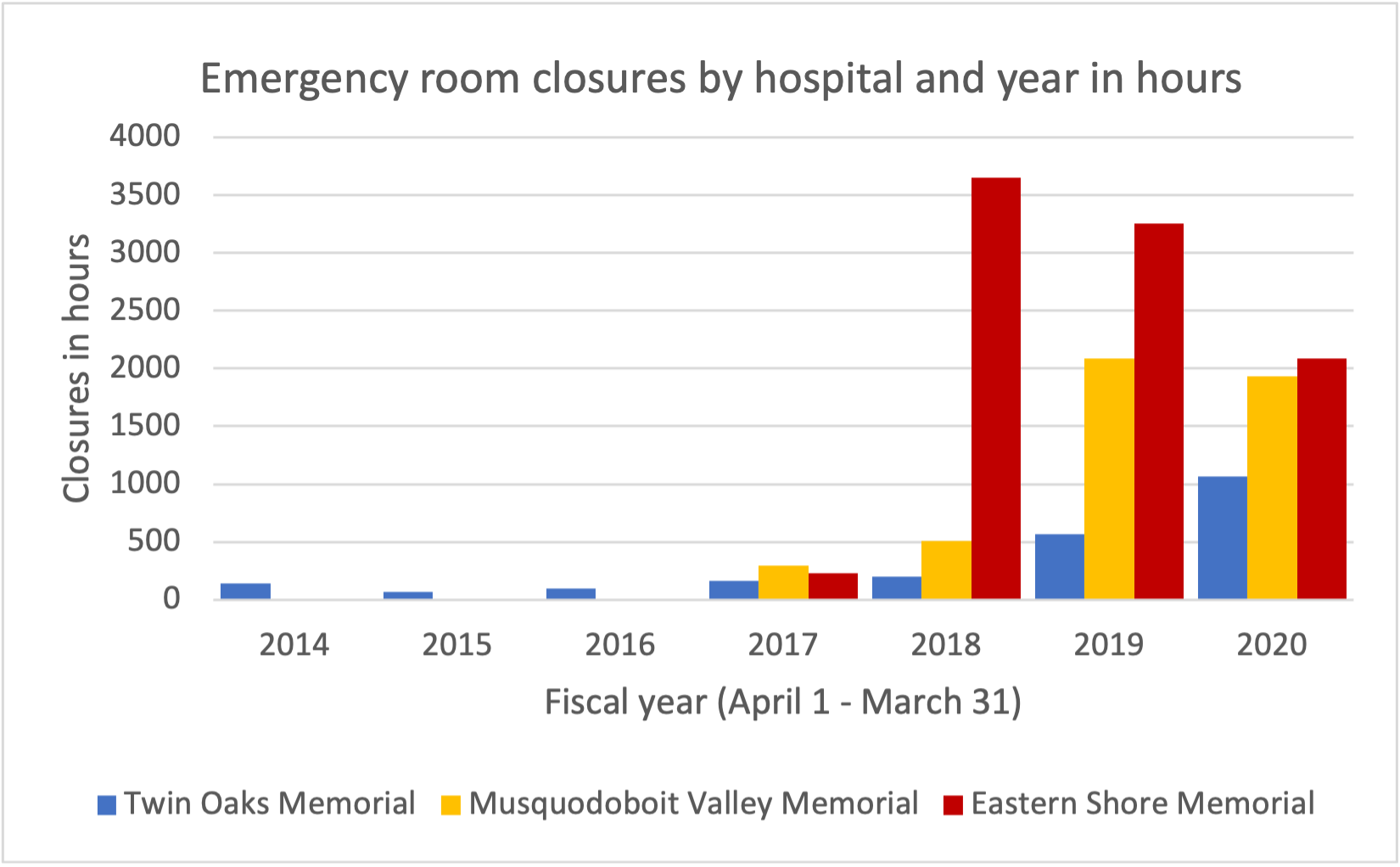 Although each of these hospitals has unique problems, all of them struggle with consistent recruitment of doctors and nursing staff.

The Cooperator talked to a registered nurse with experience at all three facilities. They requested to remain anonymous for job security reasons and will be referred to as the RN throughout this report.

Coming out of nursing school within the last decade, the RN found it hard to work in the community they called home. Without proper incentives and with long, sometimes unsafe working hours, they had second thoughts.

The RN said that a lot of the problems come from doctors not wanting to work alone in the ER. They said that the emergency room “is a scary place when you’re starting out, especially if you’re alone.”

The emergency departments in these areas are often staffed by family physicians, so they must cover inpatients, long-term care, EDs and their family practice.

Dr. Lisa Bonang is a family physician at Twin Oaks who says that the high rate of closures stem from problems with recruitment and staff burnout. She said that there was difficulty in finding staff at all three facilities, so sometimes candidates had to be picked even if they didn’t fit in certain areas of care. Bonang was interviewed by the Cooperator by email.

“There are things, in retrospect, that could have been done to possibly avoid some of the difficulties but the largest issue is recruitment which is a challenge for all sites,” wrote Bonang. “Sometimes a bird in hand is all you have and although perhaps not the ideal candidate, fills the gap.”

Both the RN and Bonang feel that if incentives were better, it would take a lot of pressure off the system. 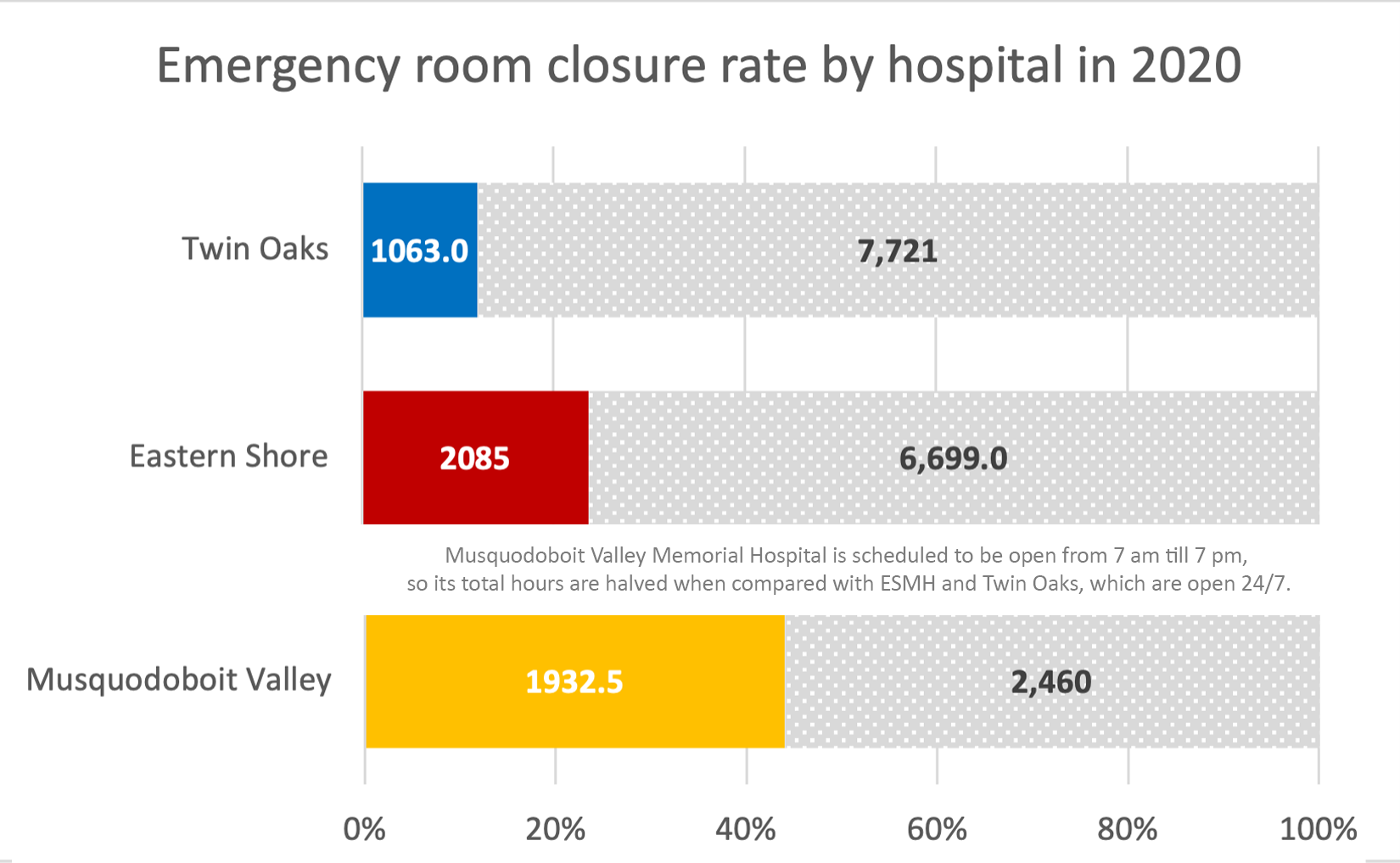 One program that the federal government has brought in to combat rural recruiting problems is Canada Student Loan forgiveness for family doctors and nurses in under-served rural or remote areas.

Central Nova Member of Parliament Sean Fraser said in a June 2021 interview with the Cooperator that in his conversations with the minister of health’s office, the value of this program is evident.

“For a significant number of people that have used this program, access to the student loan forgiveness does in fact motivate them to work in a smaller community,” said Fraser.

A Cooperator investigation in 2019 found that this program is unavailable to doctors and nurses in Eastern Shore hospitals because they are considered “urban.” Employment and Social Development Canada, the department that administers this program, which defines under-served rural or remote areas as outside of a Census Metropolitan Area, classifies all of the HRM to be a CMA and therefore urban.

“We have lost nurses because of the [loan forgiveness program], there’s much better jobs because of it,” said the RN.

In his June interview, Fraser said that the government has found that there are only three hospitals in the country impacted by this unique issue – the three Eastern Shore hospitals.

Fraser said that to fix this anomaly, the government will need to re-evaluate their definition of rural to include non-urban CMA areas. This process has been ongoing for several years and has been delayed due to COVID-19.

[Editor’s Note: The Cooperator will continue to investigate this problem to determine what the relevant federal agencies need to do to resolve this bureaucratic logjam and give the Eastern Shore’s rural hospitals access to the loan forgiveness program.]