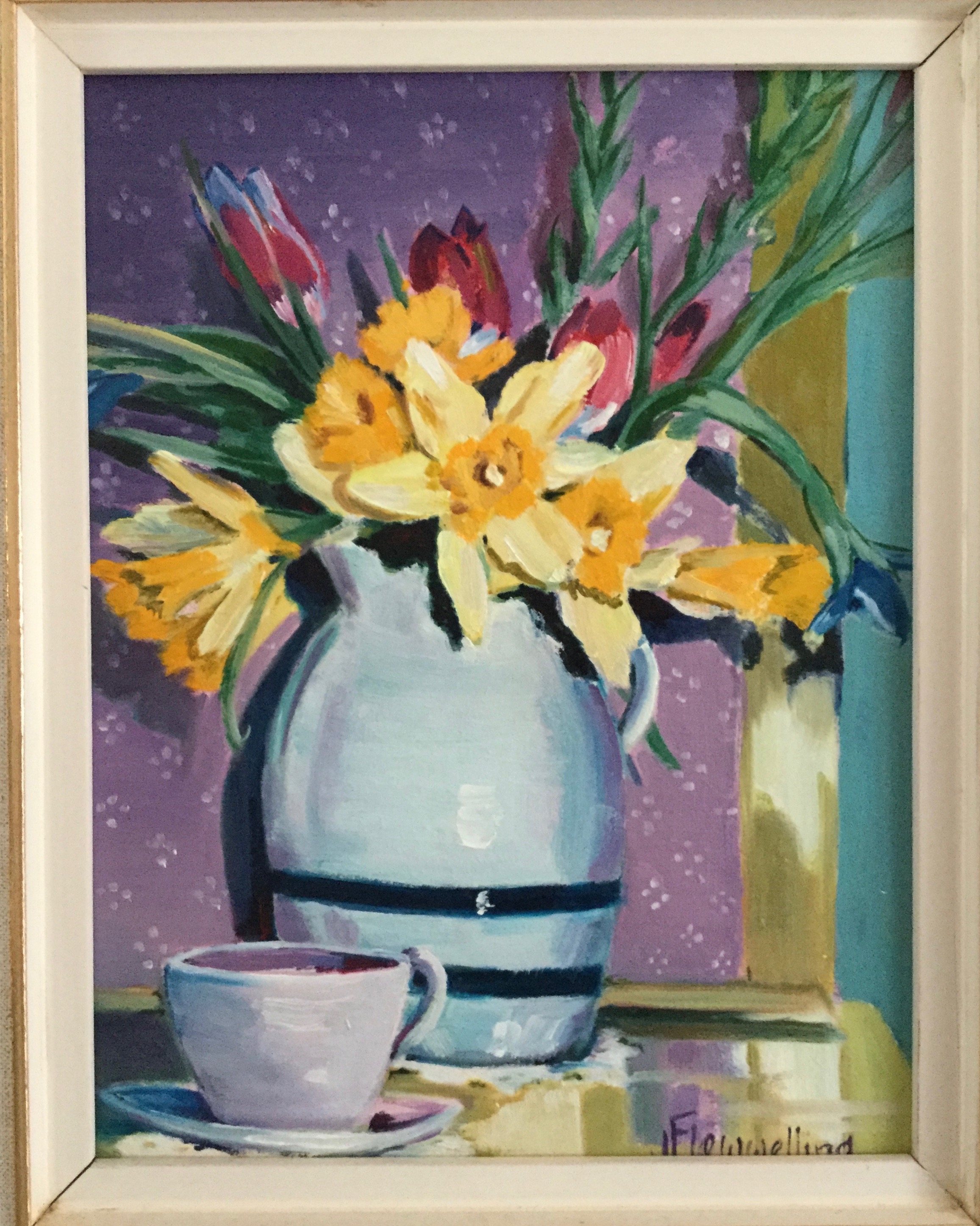 Since moving to Musquodoboit Harbour in the mid-1960s, Joan Flewwelling has had an extraordinary impact on both the artistic and crafts communities of the Eastern Shore. She is a well-known artist in her own right, the founder of an important crafts store, and co-author of a wonderful study of the region’s historic homes.

Joan was born in Dartmouth, where she was raised by immigrant parents--her father Scottish and her mother Irish. Her mother encouraged her to study art at Mount Allison. Of her teacher there, she says, “He was a nice, gentle man, who gave us a good grounding in the arts.”

Few Eastern Shore artists can claim to have been tapped on the shoulder by a member of the famous Group of Seven. But while she was drawing a sculpted figure in one of her courses at Mount Allison, Joan received encouraging words from Lawren Harris, who was visiting the campus.

Joan came to Musquodoboit Harbour in the mid 1960’s when her husband Richard opened Flewwelling Pharmacy, where Lawton’s is today. Joan received a degree from Dalhousie University so she could help her husband at the drugstore. As an artist, he worked in oils, and drew and painted many houses along the Eastern Shore.

She also set up art courses at the Railway Station, and in Middle Musquodoboit. She remembers travelling down the South Shore with fellow artist Betty-Anne Gaetz to go to an art workshop. The two women slept in Betty-Anne’s old gray van that week. One windy, wet day they were painting outdoors. Many of the other painters went down to the harbour to paint boats on the shoreline, but Joan remembers going behind a shed to paint a house on a rocky hill. “I like the contrast of the white house and the dark rocks.” This painting hangs on the wall in her room at The Birches, where Joan now lives. (Years ago, when Joan was on the hospital board, it was she who suggested the name of The Birches.)

For many years, Joan and her family lived on the West Petpeswick Road. When a cousin showed up with what Joan describes as “a pile of craft items,” the cousin suggested turning the barn on the property into a craft shop. The first year the Old Anderson House Craft Shop was opened, in 1980, it was on the ground floor in the stable part of the barn. Other local women, including Lois Bagnell, Vickie Dunbrack, and Marina Withers, were also involved in the co-op, which later grew to 15 volunteer crafters.

Before the shop’s second year, the women had to make room for more craft items, so they moved two truckloads of junk and wood out of the barn’s second floor. The Old Anderson House Craft Shop and Gallery has been great place to find local art and crafts for almost 4 decades now.

Joan’s love of old houses and architecture lead her to another great project that she worked on with Mary Dickson. Together they created the book, Dwelling Places: Historic Houses of Musquodoboit Harbour, West Petpeswick, East Petpeswick, Meagher’s Grant Road and Smith Settlement on Nova Scotia’s Eastern Shore, publishing 500 copies in 2010. “It was wonderful to put together,” Joan said. “We’d meet all kinds of people.”

Beside Joan’s exquisite drawings of the houses are descriptions of the history of each house. The book also includes gravestone names from a few cemeteries, drawings of houses that have been demolished, and much valuable folklore. With this book, the creation of the Anderson House Craft Shop, and her artwork, Joan Flewwelling has made a lasting contribution to arts and crafts on the Eastern Shore.