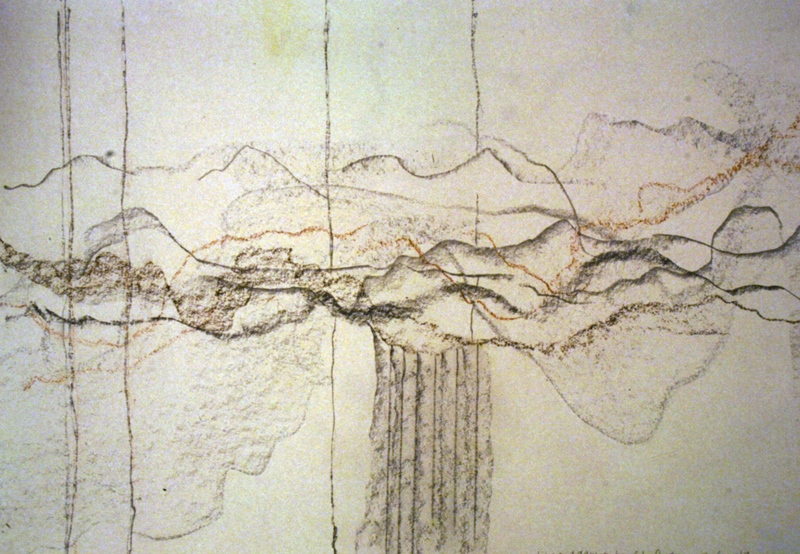 What many may not know that Jude is an eclectic artist: a dancer, costume designer and creator, and performance artist, making handmade books and what she calls three-D drawings. “Freelance should be my middle name,” says Jude, and we laugh about the understatement. She is the epitome of the artist making art according to her own experimental and experiential principles.

Jude grew up in Saint John, New Brunswick where her father was a symphony conductor, classical musician, and composer. “I always drew, painted, and wrote,” she says. “I started ballet classes when I was nine or ten years old. Those classes gave me a body language, a physical understanding of the body, and a source of gesture.” The unspoken ‘but’ suggests that dance for her is more about freedom and movement without formal constraints.

In 1968, Jude was a young artist-in-residence at Rochdale College in Toronto, the infamous experiment in alternative education. Here she ran workshops and performed. She worked as an artist’s model, made leather garments, designed costumes, and was a scholarship student at Toronto Dance Theatre. She studied at Sheraton College, graduating in 1973 with a Design and Pattern-making diploma.

She moved to the Okanagan and worked on a sheep ranch, and later on a goat diary. “Farming and art go together,” says Jude, who was also making handmade shoes, boots, leather garments, and gloves. She formed her own couture business called AIWI Shoe and Garment Works for As Is Wear Is, still in operation today. She designed a line of overalls for women.

Later in Edmonton, she was a Founding Mother of the Edmonton Women’s Building, where she met the award-winning performance artist, Rita McKeough. Thus began a friendship where Jude worked with Rita on many shows, performing and designing costumes.

In Jude’s essay, “The Changer” in the book, Rita McKeough: Works, Jude explains how Rita’s show’s “Wake an Other” redefined drawing for her: “I was ‘drawn in’ and ‘drawn out’ of an old way of experiencing and thinking about art into a new way of imagining what art could be.” “Rita’s been good for my career,” says Jude, laughing at the word ‘career’ with its connotations of convention and linearity--words that I suggest are not common in Jude’s vocabulary.

When one of Rita’s shows came to Mount Saint Vincent University, Jude came too --and stayed. She bought a house, and went back to school, graduating from NSCAD with a Fine Arts Degree in 2000. On the Eastern Shore, she has been creating, gardening, and performing ever since: she just did her new performance piece, Absent/Presence, at the Art Bar on May 25, 2019.

After our sit-down interview and my making several pages of notes, Jude and I go upstairs to her studio. Fabric is spread out on a seven-foot sewing table. Shelves are full of fabric. She shows me 3-D drawings: sculptures of dried seaweed that looks like skin that has been sutured, after suffering a wound. She shows me handmade books, their bindings, and exquisite papers.

She shows me an intricate line drawing, delicate lines that look like a small brook flowing down a slope. She writes about a drawing exercise she learned early on: “The echoing repetition of each line, a hair’s breadth above and below each other, demonstrated how a tiny instance had the power to make a large repercussion.” It is a metaphor for Jude’s art.