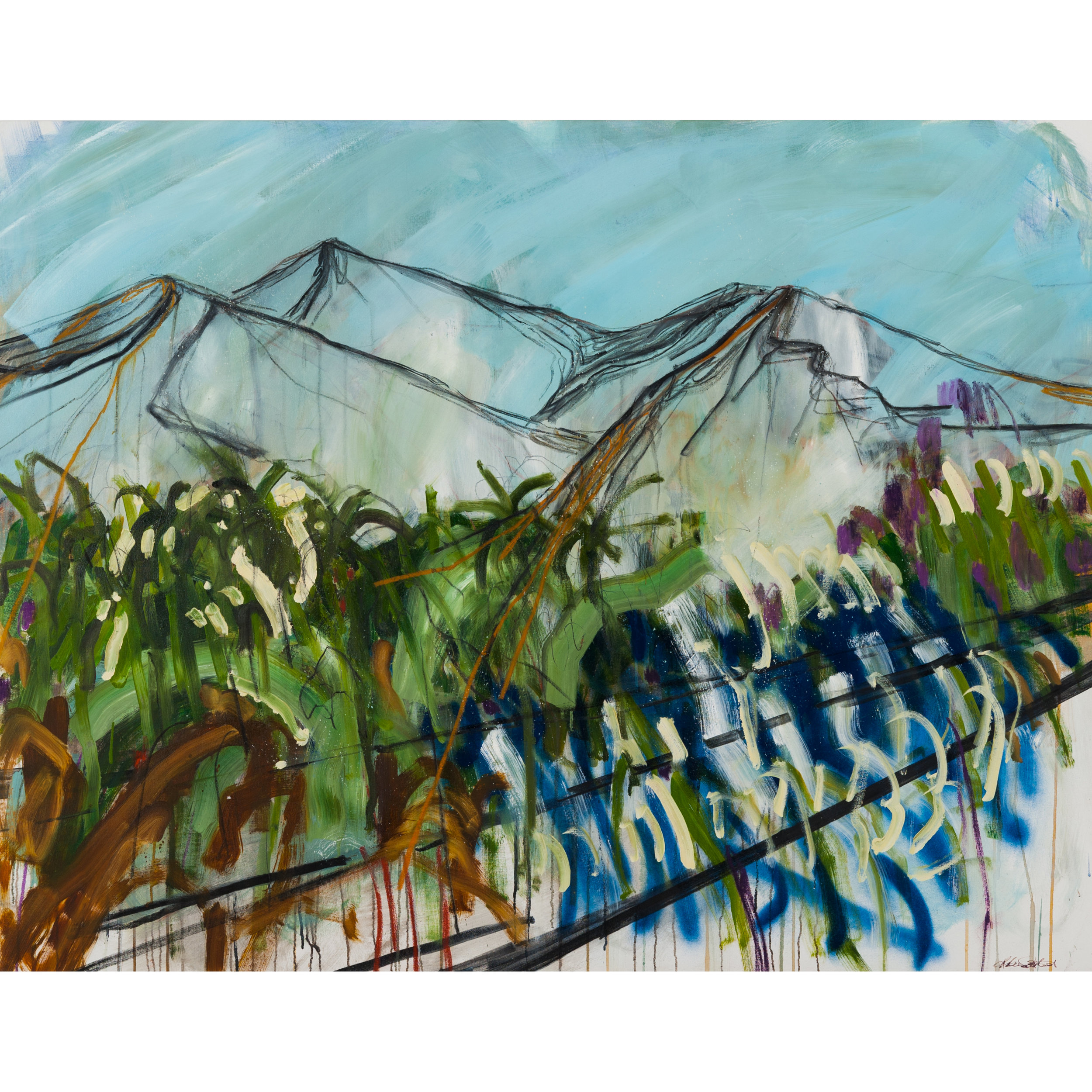 Kristina Søbstad: Paintings that Change Us

I am with the painter Kristina Søbstad in her East Petpeswick studio, looking at her large diptych, “Let’s Go to the End,” which depicts a scene from Newfoundland’s East Coast Trail. “We were walking on a sheltered, canopy-covered trail through the forest,” Kristina explains, “and then came out to the reveal of this cove surrounded by mountains.”

Her title reveals her willingness to explore, her immersion in the natural landscape, and her sense of discovery, which result in her powerfully evocative abstract landscapes on canvas.

Kristina is a Norwegian-Canadian who was born in Halifax, and who has lived in many places. Her father was a bush pilot and marine engineer whose work took him to California, Alaska, Tennessee, Baja California, and Nigeria. Kristina spent her first few years in Ālesund on Norway’s south coast, and Bodø in the north.

Kristina’s mother was artistic as was her godmother, a painter and musician. Other relatives were seamstresses who embroidered the Norwegian national costume. Kristina was encouraged by strong women in her family, and as soon as she could use her hands, she started making art. Kristina laughs, jumps up from where we sit, and gets a figure she drew when she was three years old. He wears a tall hat. “My brother joked that I had drawn the pope,” she explains.

As a teenager she started working in oils, and when she attended NSCAD University, she worked with the painters Leya Evelyn, Alex Livingston, Suzanne Gauthier, and Sheila Provazzo. “Even though NSCAD is a conceptual school, I had a bug in my head to go to landscapes. I use oils, cold-pressed pastel chalk, and charcoal,” she says. “I go out exploring and I’m influenced by sounds, colour and light. It was Suzanne Gauthier, my advisor at NSCAD, who told me I was synesthetic. The sound of C [the note] is just so yellow. Your name is very blue,” Kristina tells me.

Since she graduated in 2010 from NSCADU, Kristina has been busy. She has had over 175 international group and solo exhibitions, and residencies in Newfoundland, Chile, and Iceland. Her work has been purchased by the Canada Council Art Bank, the Provincial Art of Newfoundland and Labrador, and the Paris Francophile Art Bank. She has two upcoming solo shows: at the Christina Parker Gallery in St. John’s and at Studio 21 in Halifax. This year she will also be starting her master’s at Memorial University in Cornerbrook, Newfoundland.

Kristina’s studio is full of new works, large canvases, some that suggest the apricots and oranges inspired by sunrises and sunsets, while another work, Dos Americans, depicts Chile’s vibrant greenery.

In her artist’s statement on her website, kristinasobstad.com, she says that she seeks “to embody movement in my work by synthesizing sound, form and color, resulting in unexpected juxtapositions.” She says that her work is “where I get close and intimate going deep on the trails and getting covered in mud, burrs and swamp.” She immerses herself in the landscape to find details, such as rock striations or plant life, that translate to rich purples on the canvas, contrasting with dark grey brooding clouds. Strong lines mark the mountain slopes, while sweeping lines evoke the incoming tide, or the rise and fall of hills.

“Environmental interests are the underpinnings of my practice,” Kristina says. “We often look at places as if we are not of them. But we change it, and it changes us.” Her expressive brushstrokes, use of vivid colours, and compositions that capture the landscapes’ varied energies make these paintings full of emotion and movement. These are paintings that change us.