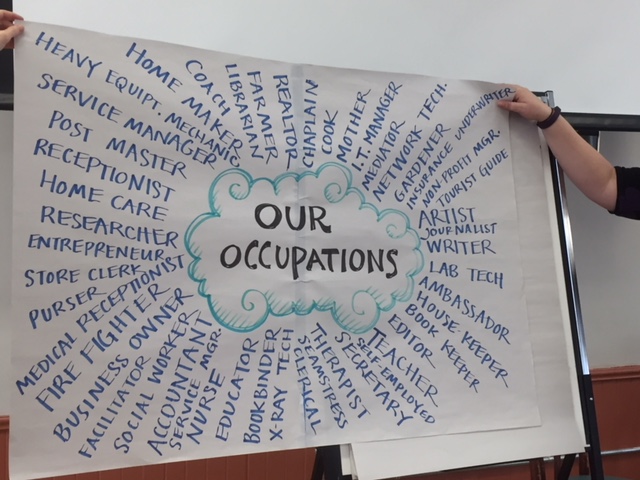 Lifelong learning: a new economic model for the Shore and Valley?

On Friday March 23, people got together at the Old School in Musquodoboit Harbour to tackle two of the most challenging issues on the Eastern Shore and Musquodoboit Valley: our aging population, on the one hand, and the lack of educational options for youth leading to employment in this region, on the other.

The event was a culminating conversation among 40 seniors, led by Crystal Tobin Legere, for a project called “The Silver Economy: Rethinking Rural Retirement.” Over the past six months, Legere has collected data from seniors through direct meetings and a survey, resulting in a map of the occupations (former or current), talents, skills, and needs of the region’s older adults.

Legere told the meeting that an aging population is not a negative for the Shore or the region: “It is the most fortuitous time to be an older adult/senior in the province of Nova Scotia.  Our community elders are the advocates and architects of their own aging. The best way to know the future is to create it.”

She discovered that many older adults are highly educated and active as volunteers and as mentors.  In fact, Nova Scotia has the highest percentage of volunteers in all of Canada. At the same time, issues of isolation, loneliness, lack of access to health care, to capital assistance, elder abuse, etc. are challenges older adults also face.

One solution is to find ways to “give retirees a new business card,” as Gordon Michael from Dalhousie’s College of Continuing Education put it.  In an informative afternoon session, Michael shared an initiative he is championing around the province: training seniors to serve as mentors for young people and for lifelong learners.

Young people on the Shore and in the Valley are struggling with furthering their education in ways that lead to full and viable employment. Five percent of students in Nova Scotia leave school in Grade 11 according to Stats Canada.  Of the students who do go on to post-high school study, 32% of first-year students at NSCC do not return for the second year. Only 39% of Nova Scotia university students graduate with a degree in four years. These statistics mask youth-at-risk for depression, isolation, and poverty.

Michael went on to offer a mentoring-based model for changing this negative dynamic: a formalized mentorship program based on the needs and assets of the community.  Dalhousie’s Department of Continuing Education has started such a program in New Glasgow, with five other sites proposed. Training in the process of effective mentorship will be offered locally, through Dalhousie, amplifying the skills and knowledge of the seniors involved.  Those who complete the training will be able to show youth and young adults how to develop an individualized path to a career, or to multiple career options.

The Old School may become a site for this new model for practical and individualized learner-driven training, during which the mentors would also be engaged in their own lifelong learning processes. Mentoring can be the first step for many individuals in realizing their true potential, and a new step toward staying engaged for a post-career population. “Our research has revealed a hidden pool of experience and expertise,” Legere said. “We can use these valuable resources to advance a knowledge-based economy on the Shore and in the Valley, one that is innovative, effective, and empowering.”