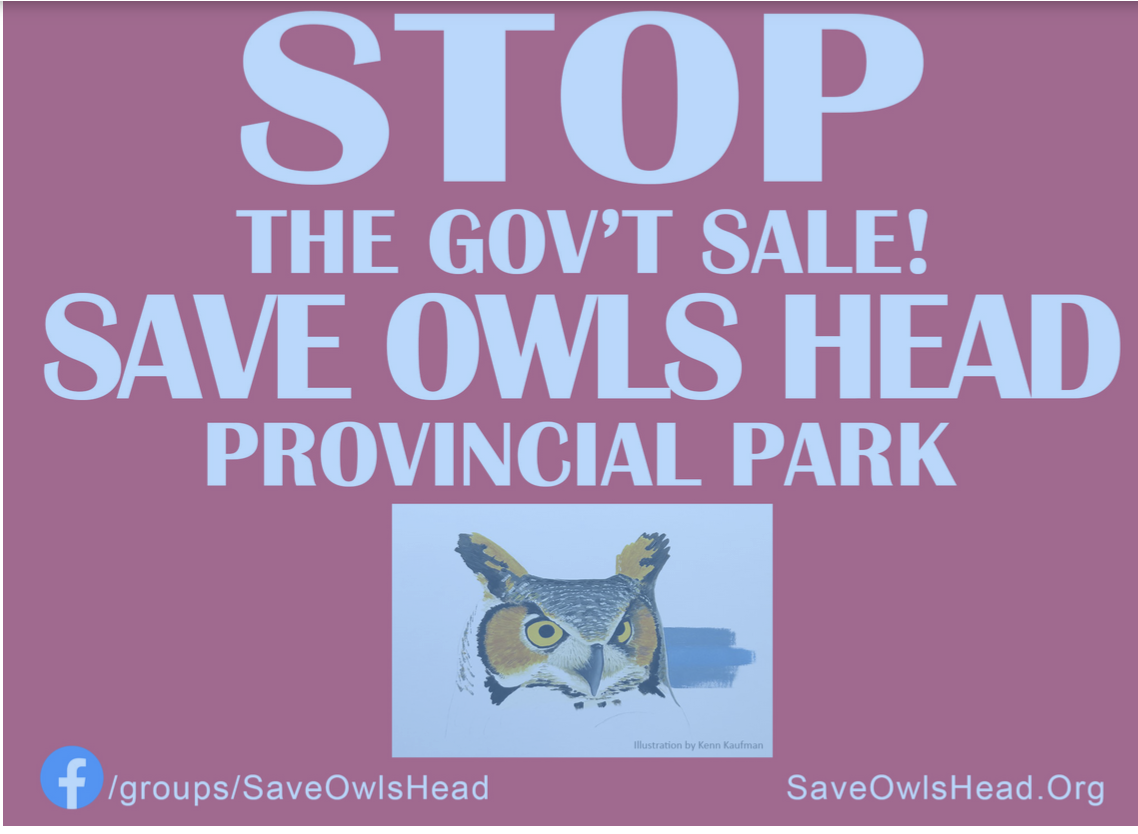 Lighthouse Links announced on November 23, 2021 that it is withdrawing from the December 16, 2019 letter of Offer that it had signed with the province to purchase Owls Head Provincial Park and convert it into a luxury housing development with a few golf courses.

The company thanked “the many residents of Little Harbour, the Eastern Shore, and all Nova Scotians who have shown their support, especially the 768 people who signed a petition of support presented to the Nova Scotia Legislative Assembly, as well as those who displayed signs on their property and wrote letters of support.”

The company did not mention the massive opposition to the project that quickly emerged once the public learned that the Liberals had secretly de-listed Owls Head Provincial Park and offered it for sale at the rock-bottom price of $306 an acre for oceanfront property.

The residents of Little Harbour were far from united in their support of the sale and planned obliteration of the park—Lighthouse Links proposed to grind up the park’s substantial rocky outcroppings to produce sand to cover up the existing landforms.

It was Sydnee Lynn, born in a house in Little Harbour, who set up a Facebook page within one day of the public discovery of the stealth sale. This Facebook page grew rapidly, anchoring what became a province-wide effort to save the park. Volunteers set up the Save Owls Head website, pulling together in one place all the scientific evidence demonstrating the ecological value of the park.

As of November 23, 2021, the Save Owls Head Provincial Park/Little Harbour From Becoming Golf Courses Facebook page had grown to more than 10,300 members. The group had recently gathered more than 10,000 written signatures on a petition to present to the House of Assembly. More than 30,000 people have signed an online petition opposing the sale of the park.

Over the past year, people put up the red “Save Owls Head” signs in many ridings, in recognition of the more than 100 other provincial properties that were in the same legal limbo that allowed the Liberals to secretly delist the park and put it up for sale.

Attorney Jamie Simpson, who has been handling a lawsuit challenging the sale, welcomed the company’s decision to withdraw. “Their letter obviously indicates that the current project is not going to happen,” Simpson said in a phone interview. “But we still need for the government to step up and pass legislation that actually protects Owls Head as a provincial park or a nature reserve. And we need to permanently protect those 100 other ‘parks in name only.’”