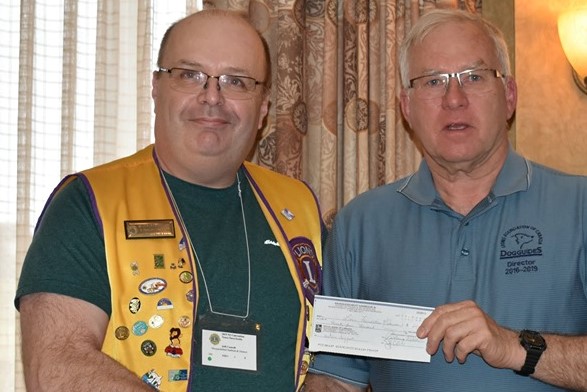 At the Nova Scotia Lions Club Convention on April 27th, the President of the Musquodoboit Harbour & District Lions Club, Jeff Crowell (on left) presented a cheque for $ 24,000 to the Nova Scotia Director for the Lions Foundation of Canada, Dave Manning, to sponsor the training of two Autism Assistance dogs.

The Club decided to match a bequest of $12,000 made to them from the estate of the late Jane Jones, a well known resident and serial volunteer in the community. Now the largest school of its kind in Canada, Lions Foundation of Canada Dog Guides is located in Oakville, Ontario and has a breeding and training facility in Breslau and pairs 200 dogs each year with persons with disabilities in seven categories:

These Dog Guides are provided free of charge to persons in need of assistance across Canada.