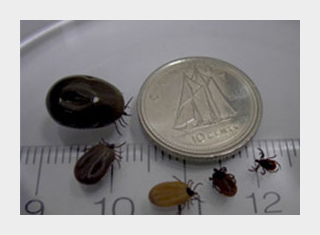 Preliminary data indicate that the number of diagnosed cases of Lyme disease in Nova Scotia grew dramatically in 2015. Black-legged ticks (also known as deer ticks), the species of tick that carries Lyme Disease, can now be found almost everywhere in Nova Scotia. HRM is one of the province’s hot spots.

The growing threat from the disease has produced a major response from the federal government. The federal Department of Health just held the Federal Framework on Lyme Disease Conference in Ottawa, May 15-17. Parliament passed legislation in 2014 calling for this conference to work on the creation of a national database tracking the disease, national guidelines for treating the disease, and a national educational campaign about the disease and prevention.

Lyme disease can produce a bewildering array of symptoms. In some people, the first indication of a bite is what’s called a “bulls-eye” rash, an inflamed area that looks like a crudely drawn bulls-eye target. But many people never experience this rash, and the blood tests for the disease are unreliable. In Nova Scotia, the provincial Department of Health and Wellness guidelines tell physicians to rely on a clinical diagnosis, rather than the less reliable blood tests. The standard treatment for an early diagnosis is usually a few weeks of antibiotics.

Even patients who are diagnosed quickly and treated with antibiotics can develop fatigue, pain, or joint and muscle aches that can sometimes last for months. There has been serious disagreement in the medical community over whether Lyme disease causes such long-term symptoms at all. The Centers for Disease Control and Prevention in the United States has taken a step in the direction of recognizing the existence of long-term symptoms, which the CDC now refers to as “Post-Treatment Lyme Disease Syndrome.”

Some doctors prescribe long-term treatment with high doses of antibiotics for people with such post-Lyme symptoms. However the CDC reports that “studies have not shown that patients who received prolonged courses of antibiotics do better in the long run than patients treated with placebo. Furthermore, long-term antibiotic treatment for Lyme disease has been associated with serious complications. The good news is that patients with PTLDS almost always get better with time; the bad news is that it can take months to feel completely well.”

There may be bitter disagreements about the best way to treat Lyme disease. But there is no disagreement among tick fighters about the first line of defense:

Do a Tick Inspection Whenever You May Have Been Around Ticks

Finding and removing any ticks after a jaunt outdoors is the top prevention priority. According to Andrew Hebda, zoologist at the Nova Scotia Museum of Natural History, “from the time they land on you, female ticks can take up to 24 hours to climb into a feeding position. And once they start feeding, black-legged ticks need to be feeding for roughly 24 hours before they pass on Lyme disease.”

There are a number of “natural” or “organic” products for sale that claim to repel ticks, but there is very little information available on whether these products are effective.

According to the U.S. Centers for Disease Control, “Repellents containing DEET, picaridin, IR3535, and some oil of lemon eucalyptus and para-menthane-diol products provide longer-lasting protection” against mosquitoes.

The most common commercial synthetic chemical defense against ticks is DEET, which is usually sold as an “insect repellent.” DEET can be harmful to humans, and should not be used on infants under 6 months. Veterinary doctors also sell products to keep ticks off dogs and cats.

Many tick fighters now recommend a synthetic insecticide called permethrin, which can be applied to clothing. Permethrin is relatively safe for use by people, and is used in products for dogs. But permethrin is deadly for cats, honeybees, fish, and aquatic life.

In selecting clothing, pick light-colored fabrics that make it easier to see small ticks. Putting a ring of double-sided tape around the top of your socks will pick off ticks climbing up your socks. Tuck pants legs into socks, and shirts into waistbands. On the footwear front, skip those comfortable open-toed sandals. Rubber boots are good for working in the garden.

And for one more layer of protection, after you’re done inspecting, take a long bath.

(And don’t forget to inspect your pets!).

If you find a tick, you will need a pair of sharp-pointed tweezers. No matches, no nail polish remover—these older methods increase the odds that the tick will inject its disease load into your body immediately. Grasp the tick as close to the head as possible, and pull back very gently until the tick pops off. (Public health authorities no longer suggest that you save the tick for inspection later on, but if you do develop any symptoms, be sure to let your doctor know about any ticks you removed.)

After you come indoors, there may be ticks that were still climbing into position to bite you in your clothing. Some authorities recommend running clothing through a hot dryer for at least 10-20 minutes as a way of killing off ticks that could be hidden in creases of your clothes.

Federal: The Public Health Agency of Canada maintains its own Lyme web page at:

The Canadian Lyme Disease Foundation (CanLyme) is a volunteer-run non-profit charitable organization “dedicated to promoting research, education, diagnosis and treatment of Lyme and associated diseases” at:

Donna Lugar manages a Facebook page on "Lyme Disease in Nova Scotia & the Maritime Provinces" at:

Donna Lugar also manages a very thorough Scoop It web page where she curates the latest news on Lyme disease and other tick-borne illnesses at: