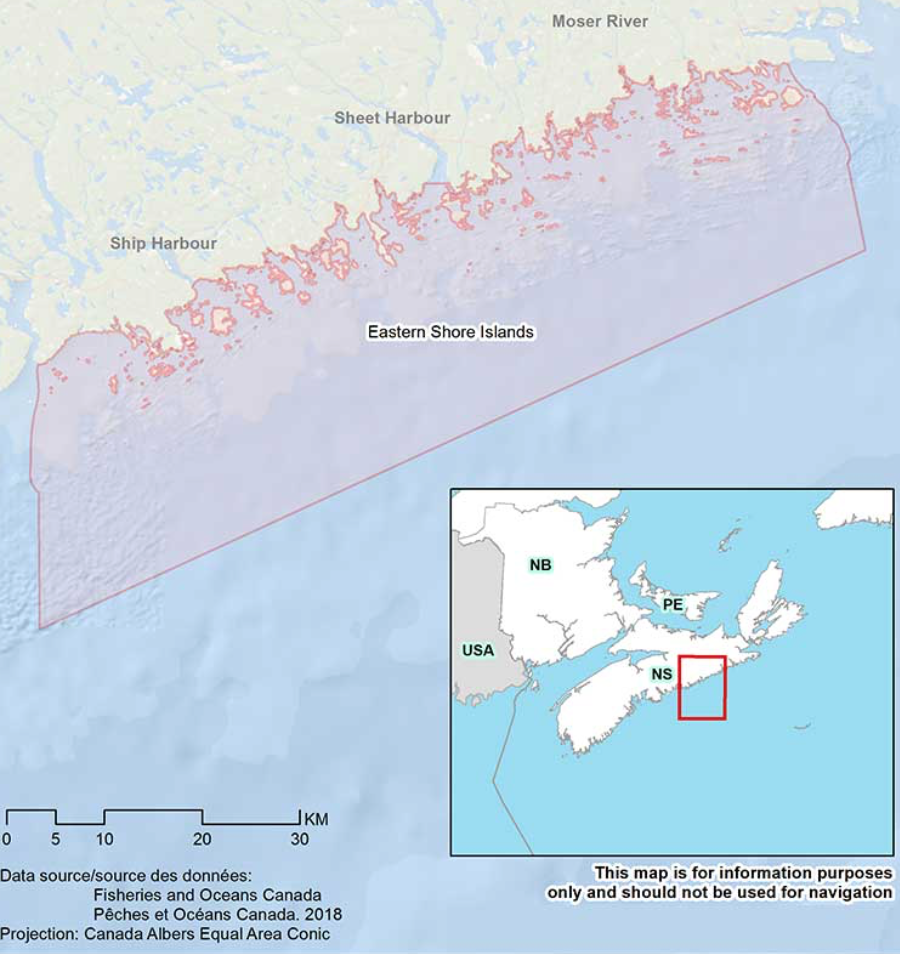 Local fishermen and provincial officials are growing increasingly concerned about the potential negative effects of the federal Department of Fisheries and Oceans identification of a 2,000 square km area off the Eastern Shore as a new “Area of Interest” (AOI) under the provisions of the Oceans Act Marine Protected Area (MPA) program. The proposal encompasses the waters around the 30km of islands between Clam Harbour and Mushaboom.

The heart of the concern involves the possibility that federal officials might designate some or all of the proposed MPA as a “no take zone,” which would put an end to commercial fishing within the MPA, including lobstering and herring. Federal officials have refused to confirm, or deny, that there might be no take zones within the Eastern Shore MPA.

Peter Connors, president of the Eastern Shore Fisherman’s Protective Association, expressed the frustration of his fellow fishermen at the DFO’s presentation on the MPA proposal at an April 5th meeting in Sheet Harbour.

“They’re going too far without letting people know what the ramifications are,” Connors told the Cooperator. “About these no take zones, there’s a lot that hasn’t been determined yet, too much, too much. We have nothing to support, and nothing to oppose. Anything could come out of this.”

Here’s a typical statement from DFO oceanographer Marty King, who was at the April 5th Sheet Harbour meeting. King told CBC that the question of whether there would be any no take zones, or how big such zones would be, would not be settled for at least six months: “We definitely can’t tell you how big it’s going to be at this stage and we really can’t say for sure that there’s going to be one, it’s usually considered best practice.”

But despite this uncertainty, King downplayed any worries:  “We don’t really anticipate there being any kind of significant impact on lobster when we create a MPA here on the eastern shore islands.”

Nova Scotia Fisheries and Aquaculture Minister Keith Colwell has expressed strong reservations about the potential impact of no take zones on Nova Scotia’s fishing industry Fisherman’s Association president Connors estimates that lobstering alone supports at least 400 families in the area, and even more families counting in the effects of all of their spending in their communities.

Senator Tom McInnis (from Sheet Harbour) told the Cooperator that he was very worried about the potential impact of no take zones. “I had a meeting here [in Ottawa] on April 19 with the Director General and others from DFO about the Oceans Act, which is just arriving in the Senate after passing in the Commons,” McInnis said. “One of the things this new act does is allow DFO to put MPAs in place much more quickly, without giving fishermen enough time to have their say. The Fisherman’s Protective Association didn’t know this MPA proposal was coming.”

McInnis said that he intended “to speak against the Oceans Act,” although he expected it to pass. He expressed some exasperation about the possibility that the area might be closed to all fishing. “Fishermen have been fishing there since the beginning of time,” McInnis said. “All of a sudden now, they want the Eastern Shore, especially around the island, protected. From what?”