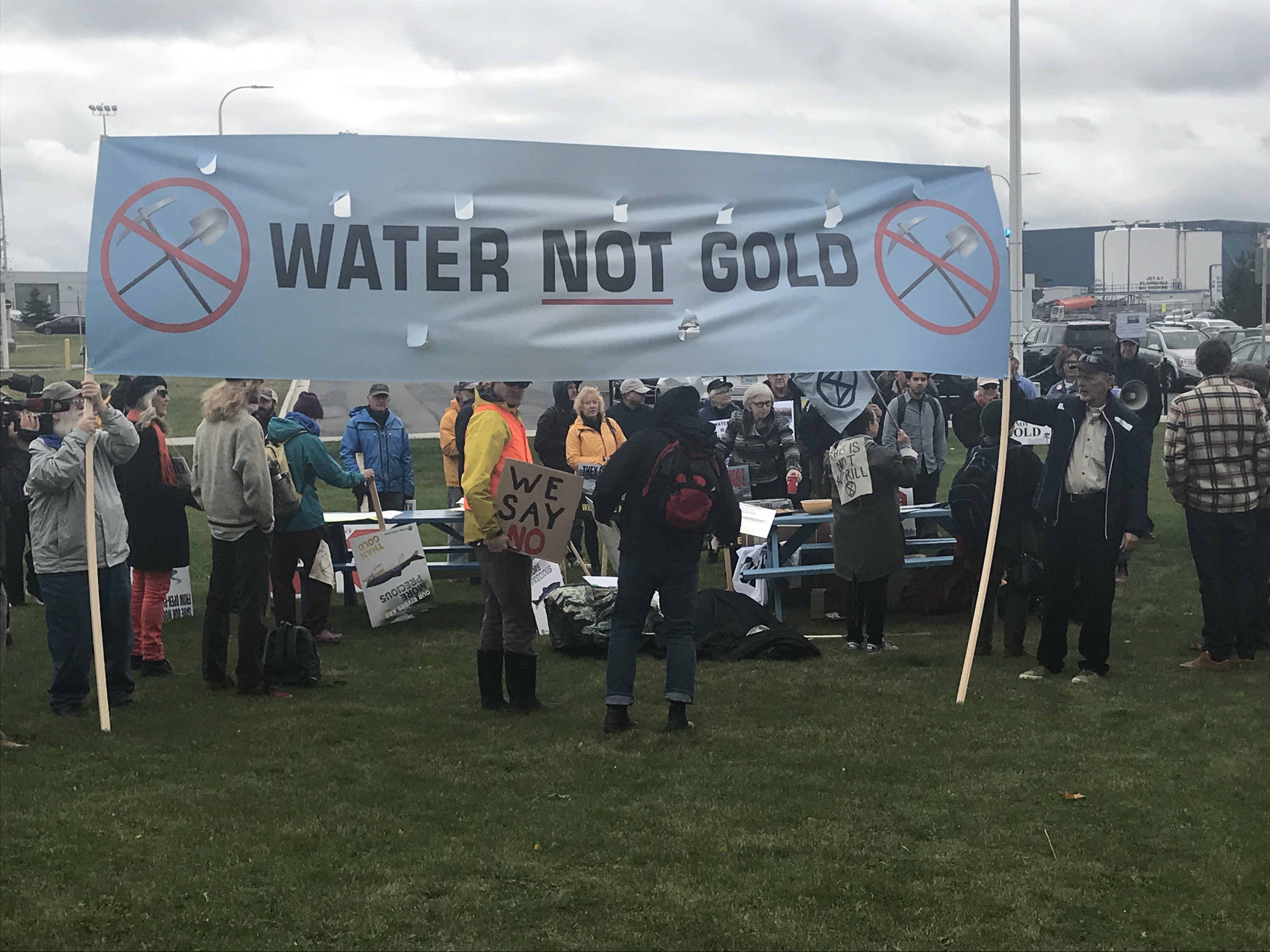 Opposition to Nova Scotia’s latest “gold rush” is growing across the province.

On Friday, October 18, the Mining Association of Nova Scotia province put on the Nova Scotia Gold Show, a closed-door conference funded by the Department of Energy & Mines to promote the gold mining industry at the Alt Hotel at Stanfield Airport. On a bleak plot of land facing the hotel, opponents of gold mining from across the province gathered for a “Water Not Gold” protest.

Among the groups participating in the protest were Sustainable Northern Nova Scotia (SuNNS), the Ecology Action Centre, the St Mary’s River Association, and the Eastern Shore Forest Watch Association. Speakers included John Perkins from SuNNS, Scott Beaver from St. Mary’s, Raymond Plourde from the EAC, and long-time mining critic and organizer Joan Kuyak, on a book tour for her guide to fighing the mining industry, “Unearthing Justice: How to Protect Your Community from the Mining Industry.

SuNNS opposes a proposed gold mine on Warwick Mountain in the French River Watershed that provides clean drinking water to the Village of Tatamagouche. Perkins has filed a lawsuit against Atlantic Gold and the RCMP stemming from his arrest at what Atlantic Gold had billed as a public information session on May 23, 2019 at the Sherbrooke Fire Hall. Acting on Atlantic Gold’s direction, an RCMP officer asked Perkins to leave the meeting, and when he refused, arrested him, roughing Perkins up in the process. Among the claims in the lawsuit are “making false statements to the RCMP for an improper purpose,” committing “battery by intentionally applying harmful or offensive force to the Plaintiff’s person,” and violating “the Plaintiff’s right to freedom of expression under section 2(c) of the defendants.”

Scott Beaver, the president of the St. Mary’s River Association, spoke about the threat that Atlantic Gold’s Cochrane Hill mine poses to the Association’s investment of more than $1 million to restore the river, including the release of hundreds of thousands of salmon fry in the last two years.

The Association is running a campaign to stop the Cochrane Hill mine and tighten up regulations of the gold mining industry. The four points of the No Open Pit Excavations (N.O.P.E.) campaign are:

1. Stop the proposed Gold mine on Cochrane Hill.
2 Ban gold mining within the 8 km corridor of the St Mary’s river watershed.
3. Create an independent committee to review all mining proposals and projects in the province of Nova Scotia.
4. Require all gold mining companies in NS pay into an environmental disaster fund.

Atlantic Gold is not the only gold company planning to expand on the Eastern Shore. Anaconda Mining has been developing a site in Goldboro that it acquired in a 2017 merger with Orex Exploration Inc. The company plans to run an open pit mine for two years, and an underground mine for 7 years.

In its original plan, the company proposed shipping the ore to be processed at its Pine Cove Mill in Newfoundland. But in February, the company reported “Due to the growth of the Mineral Resource Estimate at Goldboro demonstrated from its recent drill programs, and the company’s confidence in its ability to continue to substantially expand the deposit, the study will now contemplate a full-scale milling facility at Goldboro that will produce a doré bar.”

The decision to mill the ore at the site generates the new environmental concerns, including the risk of cyanide pollution and heavy metal contamination. Because of this change, the Province has asked for a new environmental risk assessment, which is in the works.