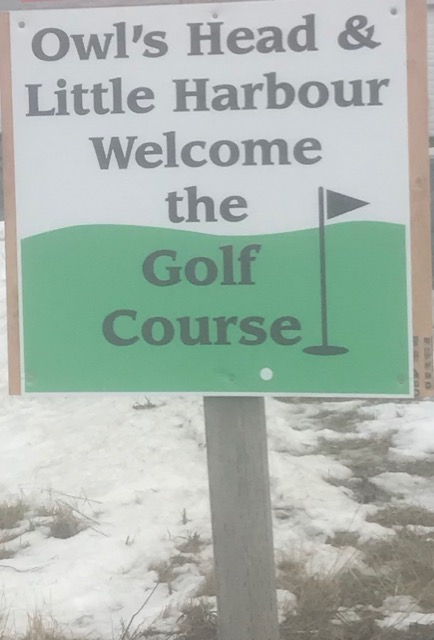 The fight over the fate of Owls Head Provincial Park has taken a new turn with the appearance of signs supporting the building of golf courses, and a gathering of golf course supporters on March 8 at Webber’s Store in Lake Charlotte. Roughly 50 people showed up in response to an invitation from long-time boat builder Bob Rosborough, one of the founders of a new group called the Eastern Shore Economic Development Association (ESEDA). The invitation was intended for “Eastern Shore folks in Favour of the Lighthouse Links Golf Complex project,” and with a few exceptions, most of those in attendance favoured the project.

Signs supporting the golf course have begun appearing along Highway 7 and other roads. At Webber’s, people could sign a petition to be filed with the Legislature some time this week calling on all three levels of government to “recognize the importance of economic development on the Eastern Shore and follow through with the sale of Federal (PID #00555284) and Provincial Crown (PID #00489591, 40751273, 41307992) lands to the Lighthouse Links golf complex project developer.” According to the petition, “The Eastern Shore Economic Development Committee and the community of Owls’ Head/Little Harbour are in full support of the Lighthouse Links proposal.”

There was no formal presentation at the Webber’s gathering. Neither the province nor the developer has made public any drawings or other information about the nature of the developer’s plans, making it impossible to evaluate the possible environmental impact or the employment possibilities of the three golf courses.

Rosborough gave some brief opening remarks, followed by District 2 City Councillor David Hendsbee. Hendsbee had come under some criticism on various social media sites from both opponents of the province’s land sale, and supporters of the golf course, for not taking a clear position.Hendsbee said that as a Councillor, he couldn’t say what he thought until he had seen the entire proposal. Hendsbee said the province had the right to sell the land.

Rosborough spent most of the afternoon talking with small groups of people, with a heavy emphasis on the job-creating potential of the project. Only one person strongly objected to supporting the plan at this time, primarily because he felt it was impossible to decide what he thought until he could look at some actual plans.