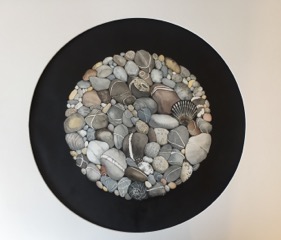 Piecing Together the Past and Future

On a cold February morning, Judith Brannen and I chat about her work at the shop/gallery at MacDonald House in Lawrencetown. She walked me through her career, working first with leather, and then moving on to watercolours and oils, with special inspiration from the poems of T.S. Eliot.

A part of the Eastern Shore arts community since 1974, Judith and her husband John made leather products crafted with Celtic knots and other patterns: picture frames, handbags, hair clips, and photo albums.

After twenty years working with leather, Brannen took up watercolours and oils. Her watercolours reveal exquisite details of the natural world and her oils are bold land- and skyscapes, often enhanced with shimmering gold leaf.

Brannen grew up in New Brunswick and was inspired by a grandmother who painted. Her father encouraged her artwork, and she later studied art at a summer camp at Mount Allison, and at the New Brunswick College of Craft and Design, where she majored in weaving and minored in pottery.

She came to the Eastern Shore in 1974 --to an old Acadian house in West Chezzetcook. She and John built a studio next door which also became Laughleton Gallery. Here she showcased her work and had solo shows by other local artists. The Surf Show, a fascinating annual group show and event with the theme of surf & sea including painted surf boards, photography, and painting, was held from 2000 to 2015.

Brannen also studied theology at St. Stephen’s University. She points to a work titled Hosannah, and to another: “You can see the Star of David there.”  In her artist’s statement, she writes: “There seems to be continuing in my work the idea of finding light in darkness; of beauty that helps me find my way. Horizon lines to me are a metaphor for the interface between this reality and another, better one.”

Her watercolours highlight the beauty of the natural world with close-ups of beach stones, shells, nests, leaves, and flowers. One work of flowers within a circle suggests the optimism of the natural life cycle.

In “Home is where one starts from,” its title taken from T. S. Eliot’s The Four Quartets, a majestic tall tree is anchored in a round root ball and its peak points to a gold leaf moon and a roof-shaped apex. A fox is curled up inside the golden circle of the root ball.

“Some people say they look like burial pods,” she says, referring to the recurring motif of the root ball. When I look closely at another painting, however, I see a small person tucked into a fetal position. “It looks like a womb to me,” I say, and Judith replies that she likes that interpretation. “I painted that one after my father died.”

T.S. Eliot’s words often title Brannen’s works. “They could keep me going for a lifetime,” says Judith. “I love the imagery, the strong metaphors, the spiritual component.”

Brannen’s oil paintings show a deepening of her spirituality as they become more minimalist, almost an abstract of land and sky with the focal point of the horizon. Light emanating from the horizon suggests an optimism and beauty, as do the gold leaf she has been using for about eight years.

“The gold leaf highlights represent how precious are the depth and width of the change required to live there” [ between this reality and a better one.] Judith’s mantra has been “the outward expression of the inward life.” Her work is a rich, reaffirming investigation of our place in the natural world where, to quote Eliot, she “piece[s] together the past and future/trying to unweave, unwind, unravel/ And piece together the past and future.”