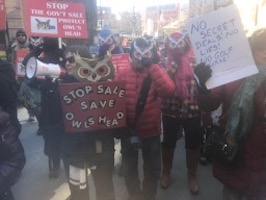 The leaders of the New Democratic Party and the Progressive Conservative Party both spoke at the Save Little Harbour/Owls Head rally at Province House on February 20, 2020.

Gary Burrill, leader of the NDP, got boos when he condemned the use of a "minute letter" to keep its decision secret, and a warm reception when he promised to introduce legislation that would require the province to hold a public consultation before disposing of land like Owls Head.

Tim Houston, leader of the Progressive Conservatives, said his party also objected to the province's secret process for taking land intended for a provincial park and selling it to a wealthy American who wants to build three golf courses there. (More videos of other speakers to follow).

[Note: it was a very cold day, which affected the visual quality of the video recordings. Next time we'll bring a hot pack!]