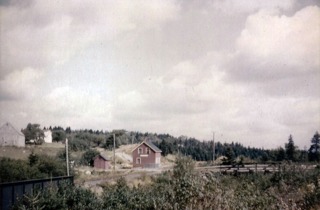 An Historically Significant Area - the Rail Corridor Between Chezzetcook and Musquodoboit Harbour.

Some Have Gone and Some Remain …..

An Historically Significant Area - the Rail Corridor Between Chezzetcook and Musquodoboit Harbour.

The rail bed connecting Chezzetcook to Musquodoboit Harbour is receiving some well-deserved attention these days. Many of us are wondering what will happen to this corridor and how it can be made a valuable and well used community asset.

The historical significance of this area is certainly captivating, but not well documented. Luckily there are some of us who remember what went before. The Beatles insightfully said, “some things have changed and some remain”!

A place fondly remembered in this area was my aunt and uncle’s home, and “I often stop and think about them”. The Chezzetcook Train Station in East Chezzetcook, was both their home and a working train station which they managed. Unfortunately, few photographs remain and I have found none on the web or at Memory Lane. Many other stations have well documented histories and photographs.  As an example, the Musquodoboit Harbour station has been well researched and restored.

Can you help us remember? Do you have photos? Did you know the Belleclaire Hotel (yes it has changed but still remains) in close proximity to the Chezzetcook train station? Do you know others who lived near the Chezzetcook Station and other interesting pieces of information?  Maybe you do and often stop and think about them.

My memory of the Chezzetcook Train Station is of a small reddish home (photo provided by Kathleen Bruce) where my Aunt Dorothy (Dot) (nee Bayers) and Uncle Elliot Slade lived from 1945 to 1958 with their four children - two of them are still living in our communities. Dorothy was my mother’s only sister and she and Elliot were originally from Musquodoboit Harbour.

In 1916, one hundred years ago, the train came to the Eastern Shore – from Woodside to Middle Musquodoboit. (see photo). Some of the station stops included:  Musquodoboit, Chezzetcook, Petain Station (West Chezzetcook), Seaforth, and the train ran across the marsh (now the #107 highway). It may have stopped in Head Chezzetcook although there was no station there.

People came and went from that station and also stayed at the Belleclaire Hotel. Chezzetcookers referred to it as just ‘the Old Hotel ‘or ‘Jenny Connors’ place’.  Many people remember the owner, Jenny Connors (her relatives still reside locally in our communities). She was an amazing person and worked hard to keep the hotel in operation, especially after the death of her husband.  It has seen only three owners and continues to look very stately and well maintained, thanks to the current owner.

The Station house is gone – torn down in the 60’s, I believe.  My aunt and uncle moved out of the station in 1958 to a house near the river.  The train continued to operate as a freight train until the mid -1980s.

We would appreciate hearing from you since we are anxious to display some of this information.  A local association would like to move along to explore how the rail corridor of Chezzetcook to Musquodoboit could be upgraded.  Your information and recollections will be helpful to preserve this area as an important historical site on the Eastern Shore as well as an active transportation corridor.

If you are willing to share photos or information, please contact me or take them to Memory Lane where they will scan them.  We would appreciate hearing any stories or information you might provide.

The Beatles song In My Life (and this excerpt) says it very well.

There are places I remember…though some have changed…

Some have gone and some remain…