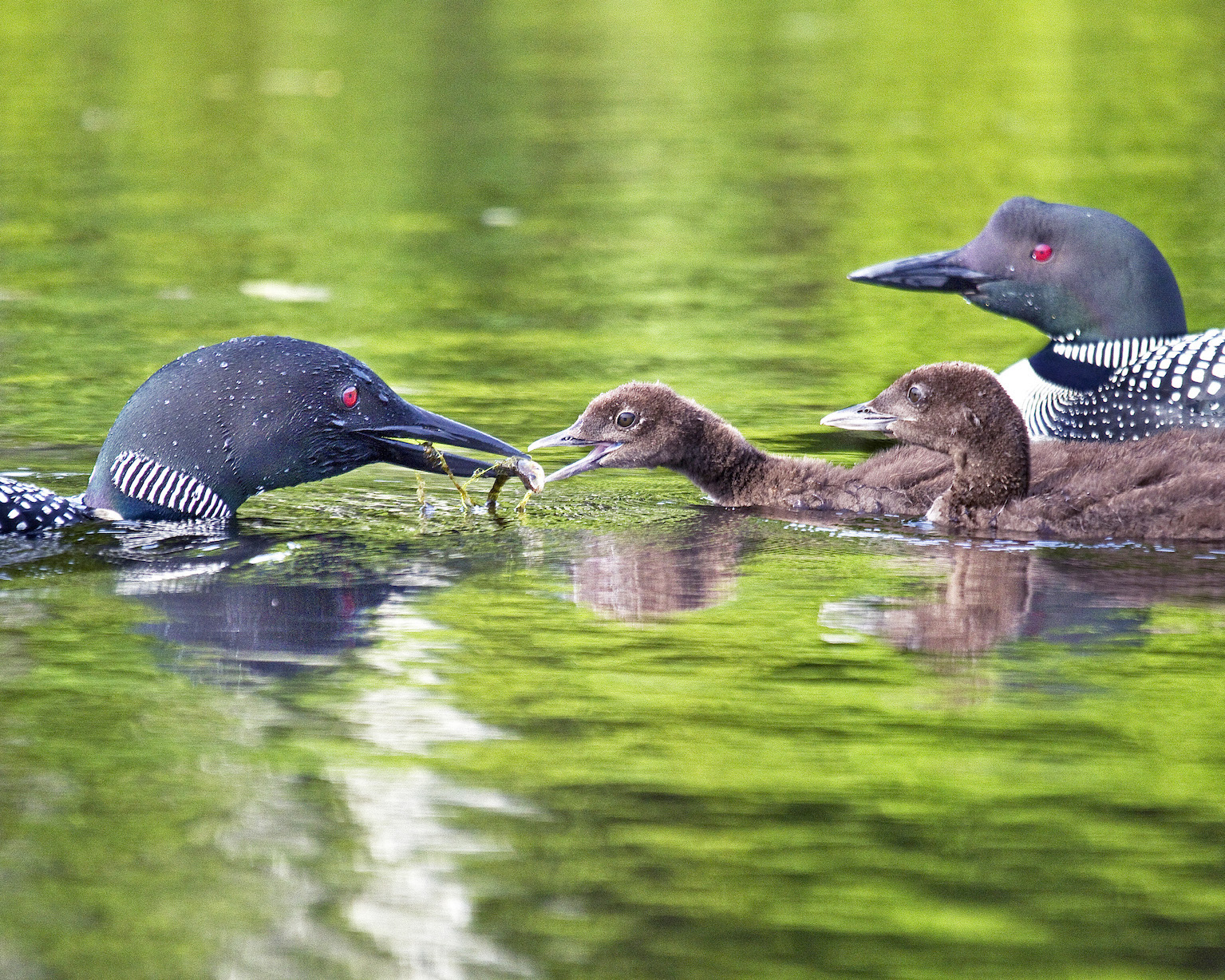 On a beautiful sunny February day, I drive east to Sheet Harbour to talk with Sandy and Robert Moser who paint and photograph the landscape and wildlife of the Eastern Shore. Robert greets me outside, and inside Sandy gives me a tour of their house with paintings and photographs on many walls. Robert shows me photographs of sunrises and sunsets in Mushaboom and Taylor Head, and Sandy has large paintings of loons sitting on an emerald lake, and jewelry of sea glass and silver--these are the jewels of the sea and the lake that are the rich, colourful artwork of this husband-and-wife team.

Sandy Moser is a self-taught artist who has taken many workshops. Raised in the Annapolis Valley, she started painting as a child, did oil painting in grades 11 and 12, but switched to acrylic, watercolour, and gouache when she took up painting again in the 1990s after teaching high school and raising three children.

She shows me a binder of her artwork, and her award-winning paintings, such as “Momma’s Treasures,” a mother loon with two young sitting in a rich green lake. This painting won first prize in the exhibit for the Contemporary Art Room Online Gallery in December 2018.

Another painting. of a piping plover and two young, won a Special Merit Award in the Light, Space & Time Online Art Gallery’s Nature Art Competition in August 2016. The binder is thick with many pages of award-winning paintings of owls, loons, and endangered wildlife such as snow leopards.

“I want the viewer to be able to appreciate the scenery and habitat and the beauty of these creatures,” writes Sandy in her Artist Statement. As I survey the wildlife in her binder, I find a recurring theme of animals and their young. “Raising babies in the wild is challenging,” she says, and she feels the responsibility that we have of preserving the environment.

Sandy has donated artwork and her time and effort to help the Nova Scotia Nature Trust and Hope for Wildlife. She organized a festival and sale of wildlife art at Cole Harbour Place for Hope for Wildlife several years ago. More recently she organized the Seacoast Trail Art Studio Tour in Sheet Harbour & area on September 29, 2018. She is multi-talented, creating beautiful jewelry from sea glass with pearls, and sterling silver. She also paints on silk, and hooks rugs.

“They would ask him to stop taking pictures so they could open their gifts,” says Sandy of her children and their father at Christmas. Robert Moser has been a photographer for over 35 years. He bought his first camera, a Canon TLb, when he was a student at Dalhousie.

A member of the Truro Image Makers Photography Club, Robert has also won numerous awards. He twice won first place in the animal category of the NS Photo Guild. Now he and Sandy take their cameras in waterproof containers and step into their canoe to photograph loons.

“Living on the Eastern Shore of Nova Scotia for most of my life has allowed me to photograph wildlife and different landscapes and seascapes,” writes Robert, who has taught workshops in Sheet Harbour and at Liscomb Lodge. He will be teaching a photography workshop related to the 100 Wild Islands.

To view the work of Robert and Sandy Moser go to their website at www.mosersartandphotography.comor to Norse Cove Suppy, Liscombe Lodge, craft shows, or the Seacoast Trail Art Association Sale on the second Sunday in August later this year.