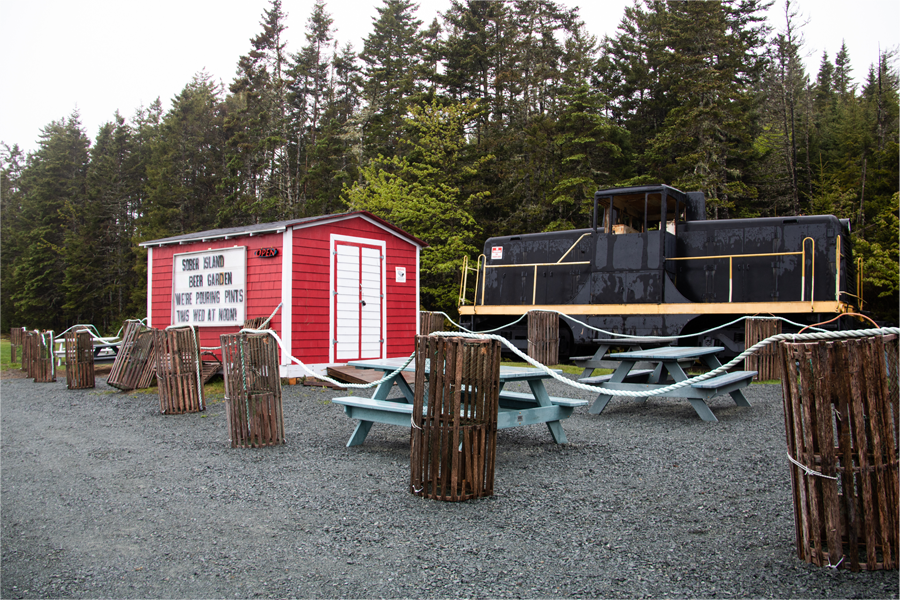 Some local businesses allowed to open in phase one

Patios, campgrounds, and some personal service businesses can reopen starting on Wednesday as pandemic restrictions loosen.

Leading image description: Sober Island Brewing Company opened a beer garden next to the Musquodoboit Harbour Railway Museum which will open to public seating on June 2 with the start of phase one. Photographed here on May 31, 2021. (Ethan Quigley/Eastern Shore Cooperator)

As a part of phase one of the Nova Scotia reopening plan, patios can reopen to table of ten, private campgrounds can reopen with adequately spaced sites, and personal services such as tattoo parlors or salons can open by appointment.

Rebecca Atkinson is the owner of Sober Island Brewing Company, a brewery which operates a main location in Sheet Harbour, and a smaller secondary location in Musquodoboit Harbour. She says that she is excited to have her community spaces open as a gathering place.

“We are pretty thrilled that we can open our outdoor spaces,” says Atkinson. “People are just really looking for a bit of free movement and to get out and see everyone… I think it is really liberating for most.”

She says that her staff are going to be fully vaccinated and she says she feels safe to go ahead.

“I’ve always been confident that we can open [if we are allowed], and if I’m not confident, we make that choice to not [open],” says Atkinson. “Our interest is keeping everyone safe and the business afloat, so there is that balance that we need to strike.”

“I look forward to having the live music acts, and the smiling faces, and the sunny days,” says Atkinson. “Just that sense of getting to enjoy our place again.”

Hopes for the next phase

Meryl Atkinson runs Henley House Pub and Restaurant in Sheet Harbour and is the mother of Rebecca. She says that although her indoor space will not be impacted by phase one, she’s excited for what comes next.

Henley House has been open Thursday to Sunday for takeout and will be reopening its patio on June 2.

When asked if she wishes reopening would come sooner, Meryl says: “I’m okay, I know it’s awful for the business, but I would hate it if someone came out for supper and got sick.”

She says she is willing to wait but is excited to get the atmosphere back in her business. She says that her regular crowd has been itching to get back to normal.

“When you have a small community like this that doesn’t have a gathering place…” says Atkinson. “There are only so many small groups in their garage or living they can handle. We have a regular trivia crowd, now we’re doing it online. We’re doing everything we can to keep the connection.”

Lack of clarification on timelines

Ryan Murphy is the owner of Murphy’s Camping on the Ocean, a seasonal campground in Tangier that has operated for over fifty years. Murphy is concerned about the lack of clear communication from the government in terms of who can book and when. He made a decision to close his operations before the newest lockdown started.

“Although people could legally leave [their community], we didn’t feel comfortable having visitors from outside,” says Murphy. “We didn’t want to be the vector for community spread. This isn’t our key time of year, if we were in the position of needing this money for payroll, this would be a different decision.”

When lockdown dates were pushed back to the middle of June, Murphy took on some extra projects that he wouldn’t have been able to get to this year normally.

“We were told June 9, that was what I was banking on,” says Murphy. He says they are keeping with that plan and staying closed for another week.

“I think they have done an okay job with outlining [timelines], you can do the math yourself and figure out when things will reopen,” says Murphy. He says that they are getting a lot of questions about when customers from around the Maritimes can book, he wishes the government had clarified some rough dates.

“It seems like most other provinces are going to be ahead of us in terms of reopening timelines, it is gonna be interesting because we’re gonna get a whole lot of reservation requests from outside of the province because people assume we’re open.”

For right now, Murphy says that his business has waived its cancellation fees to allow for uncertainty.