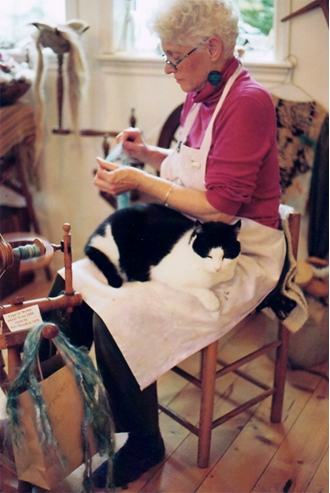 Spinning My Way on ‘The Rock’ By Leslie Hauck

I was so excited to be chosen as an instructor for a “The Year of Craft” Fibre Arts Conference organized by the Newfoundland and Labrador Craft Council.  There were fourteen crafters covering the fibre arts of quilting, net making, felting (both high fashion and nature-inspired sculpture) embroidery, dying and printing, tapestry weaving, paper making, sculptural knitting, and me, hand spinning yarn –from Canada, the U.S., England, and India.

I applied to teach not only because it would be a great and fun experience, but because I would be paid handsomely if I taught all three days—and with all expenses paid!  The workshop and accommodation venues were strung out in various buildings spread over three contiguous communities that lay on Bonne Bay, a large and complex configuration.  My workshop was in the Visitor's Centre for Gros Morne National Park, where someone spotted a moose strolling by outside our big windows at the edge of the forest.

We were fed each day by the local ladies' auxiliaries of fire and church: moose meat in the soup, “bottled moose” spread in sandwiches, a divine moose stew that hinted of good red wine and sour cream, and my favourite: Newfoundland Flakey—made from layers of saltine crackers, Dream Whip (my friends in Nova Scotia know me as very anti-Dream Whip!), and custard made from a box.

My students were enthusiastic, wonderful, and fun. All the attendees, being fibre fanatics, were kindred spirits.  We were witnesses to the meeting of mountain and ocean scenery, sunrise colour on western flank, the green of spruce generously flecked with the yellow of fall birch all the way up to the top of the mountains, all except Gros Morne, which is solid rock, alternately displaying grey or purple, and whose name, I was told, means “Big Gloomy” There was snow on top by the last day.

I spent two days after the conference in and around Trout River walking two trails in hail and sleet, with a landscape that was redolent of the Wild West.  My B&B host introduced me to a ninety-one-year-old spinner who was born in an outport on the Western peninsula, and I pumped Edna for tales of her life for two hours.  Since another couple and I were there hiking “off season,” B&B owners Doris and Tom Sheppard made sure we were nourished with full hot meals for supper. Then we were easily drawn into card games each night.  My idea of perfection!

With the drop in temperature and white stuff on the undulating roads, it was an easy decision to head home to West Jeddore.  Gros Morne, I'll back!

Leslie Hauck, owner of The Spinner’s Loft (http://www.thespinnersloft.ca) in West Jeddore, has been spinning anything spinnable for 35 years.