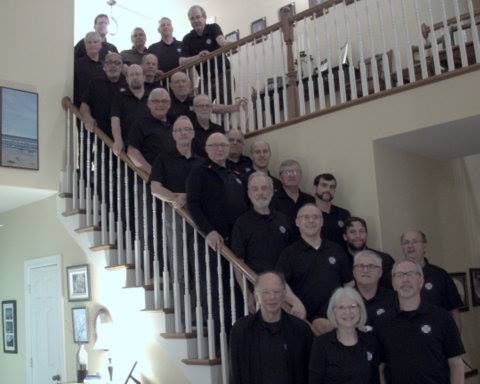 The Magic of the Coastal Voices Men’s Choir

As the newest board member with the Coastal Voices Men's Choir (CVMC), I've been curious about the beginnings of this Eastern Shore-based group of singers. Founding member Tim Bruschett shared some of the history leading up to the choir’s first season of song in 2011.

Gregory: How much experience in Choral singing did you have before joining CVMC?

Tim: My choral experience began some 12 years ago simply because I love to sing, wanted to sing with others, and hoped it would improve my own singing. Though it was a steep learning curve at first for someone with limited knowledge and experience such as myself, the Musical Friends Choir was a terrific introduction to choral singing on the Eastern Shore.

Gregory: What initially got you interested in joining Coastal Voices?

Tim: The first all-male choir I heard was Nova Voce and I was smitten. Yet travelling into Halifax for practices seemed out of the question at the time; more importantly, I simply didn’t feel I had the musical chops for such an accomplished group. I happened to share my thoughts with a fellow musical friend, Allan Banks. As former NS Choral Federation President, he suggested we start singing together as an offshoot men's-choir.

Another musical friend, Janet Gaskin, who has vast credentials in Music Education/Conducting, agreed to herd us along as our Artistic Director. We had our first practice in 2011 in my kitchen on East Petpeswick Rd., with the original six members. After working with couple of keyboard accompanists, the universe sent us John Plant, whose background in Piano Arranging/Composition has allowed CVMC to grow well beyond anything I might have imagined.

Gregory: So what kept you interested in continuing for the years you have been involved?

Tim: The quality of the choir’s sound; and the difficulty/range of the music performed has grown exponentially with each passing season. I can only wonder at the possibilities for the future. Singing with such a great bunch of people has been among the finest experiences of my life and a true honour.

That being said, there’s something else beyond all the great music and the camaraderie. There’s a kind of magic that happens when all the many variables that constitute a choir and the performance of a piece come together to create something greater than the sum of the individual parts. The closest I can get to describing it is to say that it’s like hearing 'another voice' in the room that exists within, yet somehow apart from, the voice of the choir itself. You recognize it the first time you hear it, and you never forget.

For information/inquiries on how easy it is to become a member, and/or keeping up to date on the 2019 Concert Season, please contact us. Just call (902) 889-3179, or e-mail [email protected]. We also post online events though our Facebook Page and on http://coastalvoices.ca