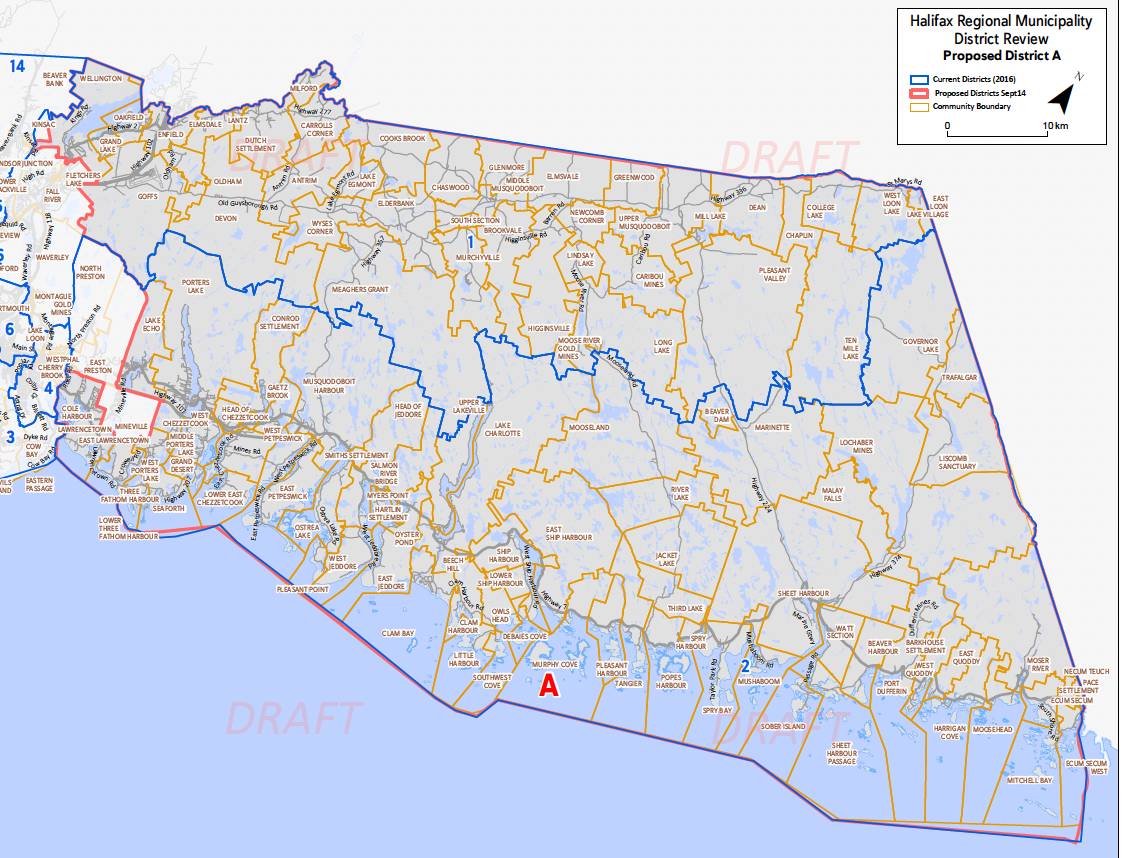 What Amalgamation Has Wrought: 2022 Version

When the Halifax Regional Municipality came into being in 1996, many in the villages and enclaves of the Eastern Shore and Musquodoboit Valley were rightly concerned about an additional third layer of bureaucracy. The small communities had organized their own municipal concerns; the Halifax government had to manage urban, suburban, and rural issues.

And now: As we reviewed the new HRM Districts Proposal, we were struck by the vastness of the area that is proposed for the new District A (to distinguish it from the combination of Districts 1 & 2). In this new configuration, the Shore and the Musquodoboit Valley will have the largest population on any district, and only one voice on Counci

How is this new configuration likely to work out?

As an example, note the problem of potable water in the business core of Musquodoboit Harbour.

Local well water is often full of manganese and arsenic, especially in the village core, where small businesses must have clean potable water.  A severe drought in August, followed by a hurricane in late September, left many without access to even the manganese-filled well water for days, or in some cases, weeks.

But since a Department of Mines study in 1968, we’ve known that there was a large aquifer located just behind the Dale Bennett Ball Field with large volumes of high-quality water. The Old School got a grant to do a very small (under $15,000) project to demonstrate the quality and availability of this water using a solar-powered water pump and pumphouse.  The well has been drilled and the water flow is very good.

At the local community level, this project has received advice from water engineering experts, environmental policymakers, and direct help from Taylor Lumber, the high school O2 program, and experts on sustainable building and solar design, all people who live in the area.

We thought getting such a small project approved would go quickly. However, in the past weeks, both HRM and the Province have asked multiple questions (often the same questions) and, although the community is ready to make it all happen, the government is not. Once again, we find ourselves struggling with multiple levels of government bureaucracies dragging out a simple community project.

So think about the vastness size of the proposed District A and the number of communities in that district working to solve local challenges, all represented by a single person on Council. Think about the challenges of policymakers and those charged with managing the rules of oversight for the unwieldy amalgamation of urban, suburban, and rural HRM, with the province always hovering with its power to override anything our Council might decide.

Trying to get HRM and the province to work together to deal with rural issues reminds me of the term “Rearranging deck chairs on the Titanic.”  Meanwhile, our communities are working away, building small boats that work.

We will have accessible water in Musquodoboit Harbour. The water will be clean and safe because we will navigate all the metaphorical icebergs until we have what we need.

If you wish to join in this effort, please contact Karen Bradley at [email protected].

[Karen Bradley is the co-chair of The Old School Community Gathering Place.]