One of the remaining mysteries about the secretive site selection process for the new consolidated junior/senior high is exactly how long ago the Liberal government decided to locate the school in the Eastern Shore Industrial Park in East Chezzetcook.

An anonymous source has provided the Cooperator with a new drawing by the well-known consulting firm WSP that pushes that date back to February 20, 2014, four months before then MLA Kevin Murphy stunned a June 8, 2014, meeting in Musquodoboit Harbour by proposing to move the high school, the Birches, and the rink to what he called a “campus” in the Eastern Shore Industrial Park. 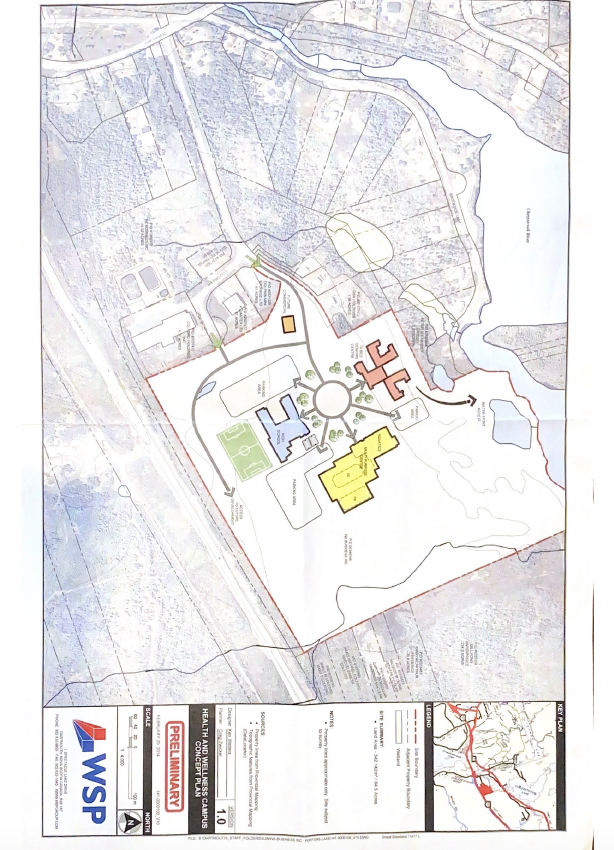 This new drawing shows that someone paid WSP to do a full-scale plan well before Murphy’s announcement. The Cooperator is now attempting to determine who paid for this plan. If you have any information that would be relevant to determining who commissioned this drawing, please email the Cooperator at [email protected].

In a previous story, the Cooperator featured two other maps of the site, one from 2015 and one from 2018. In that story, “The Mystery Map: What Did They Know and When Did They Know It?” we reviewed the history of these two maps.

What was striking in these two maps was the nearly identical features of the “campus” portions of the two maps, with all the major buildings in the same locations, all the way down to the same clip art trees around the common area. The CCVA map is clear enough to read the labels on the buildings: “seniors nursing home, aquatics, multipurpose centre, high school, and two future commercial sites.”

We emailed CCVA head Jean McKenna to ask if she knew where she got this map. In an email on March 16, 2021, McKenna wrote, “no idea Mr. Bell, there were tons of these floating around, Claudia Chender [|NDP MLA] had one in the house, saying that the site was a done deal, I gather that is what you are trying to say.” (McKenna was the official agent for MLA Murphy’s first campaign in 2013.)

The title of the February 20, 2014, map, “Health and Wellness Campus Concept Plan” is consistent with former MLA Murphy’s June 8, 2014 “campus” presentation. And all three maps share a set of buildings, and the symbols for those buildings: the high school, the Birches, and the aquatics/multi-purpose building.

The map lists Greg Zwicker as “planner” and Ken Watters as “designer.” In 2018, Zwicker co-founded the firm ZZAP (Zwicker Zareski Architecture + Planning). Watters works at ZZAP as Senior Planning Technician. The Cooperator has contacted Zwicker and Watters for more information about their work on the map, but neither has yet to reply. The Cooperator contacted WSP earlier for more information about the 2018 map, but no one from WSP ever replied.

So it remains to be determined who commissioned the 2014 WSP drawing, and how long before February 20, 2014, some still unknown entity initiated planning to locate the high school in the Eastern Shore Industrial Park.