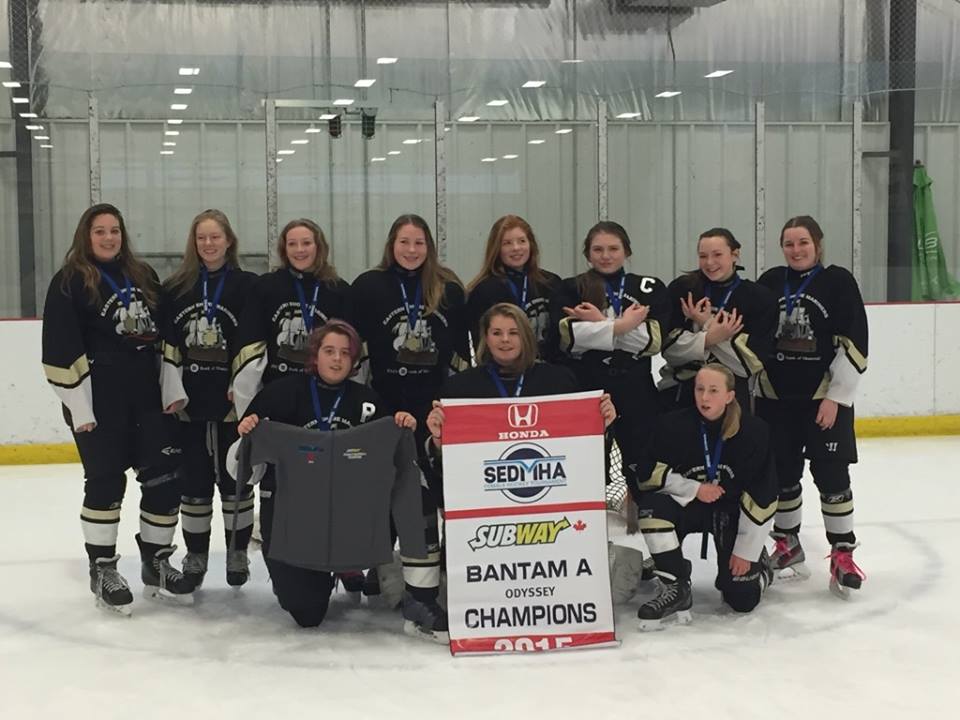 Well, they finally succeeded. These 11 players have been together since Atom and have always wanted that token SEDMHA banner and Sunday they were able to finally take the championship lap around the ice letting the banner fly over head as they skated around.

For these girls it was a great achievement as they had to overcome some adversity in their 4th game. After going 3 and 0 throughout the tournament, they came up against a formidable opponent – Cole Harbor Wings – who proceeded to hand them a sound defeat. Any other team may have succumbed to the pressure of having to come through the backside of the draw in order to win gold. But, the Eastern Shore Bantam Mariners were more than up for the challenge.

After a good night’s rest, our girls came out on fire soundly defeating the Halifax Hawks 7 – 2 moving them in to the final game in the afternoon, a rematch against Cole Harbor Wings. The first 5 minutes of the game it looked as though CH was going to take it as they kept the pressure on and scored the first goal, catching our girls sitting back on their heels. But slowly, the momentum shift began; ES scored about halfway through the period and then went ahead on a late tally just 40 seconds before the period end. From then on it seemed as though CH had lost the desire to win and our girls kept the pressure on the rest of the way. When it was all said and done, our Eastern Shore Female Mariners won convincingly  with the final score being 5 – 1.

It is too difficult to single any one player out. All 11 girls played exceptionally well and have earned the right to call themselves 2015 SEDMHA Bantam Champs!

Well done Girls!! Well done to the coaching staff, volunteers and parents too!