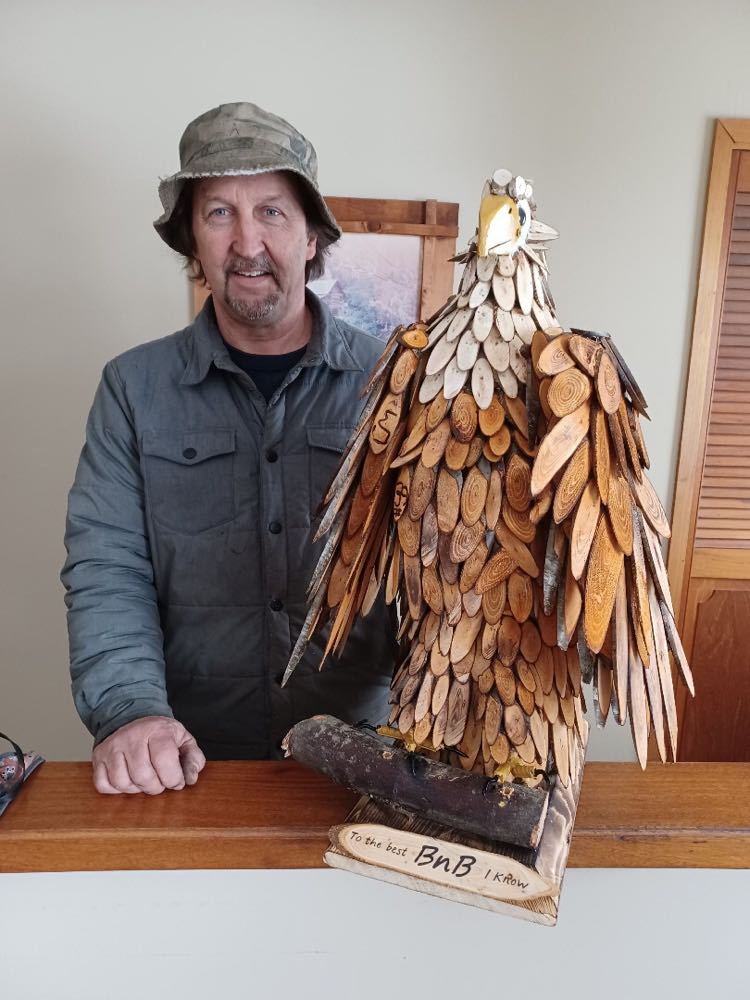 If you’ve taken a walk on the Gaetz Brook Greenway, you may have seen a wooden owl perched on one of the trail`s bridges. Or driving along Pleasant Drive in Gaetz Brook, you pass a lawn full of quirky, one-of-a kind sculptures and whimsical Minions. These creations are some of the wonderful creatures made by the personable and generous Calvin McKay.

McKay grew up in Little Harbour and worked for many years as a heavy equipment mechanic in construction. When he retired in 2017, he started making things to keep busy, which ramped up during Covid.

On a Saturday afternoon, I joined McKay and his partner Janet Thomas-Kendell in their garage to talk about his work and his process of making owls and eagles and other sculptures from recycled materials. I scan the tidy garage and see nuts and bolts attached to magnets on the walls. On the garage door is Janet`s drawing of a truck.

The tables in the garage are full of oblongs of alder branches, cuttings made at an angle, which will be the feathers of owls and eagles. McKay pin nails these feathers to a trunk of rock maple and creates a detachable head with a face of pennies and more alder pieces to create more feathers and eyebrows. The owl`s feet are made from rebar and cement nails, while the nose is made of screws and bolts. Janet paints the eyes.

McKay shows me his book with his to-do lists. McKay points to two owls on the garage floor that are for his twin daughters, who helped make the birds. With a propane torch, he burns his initials and a number onto an eagle and darkens some of the feathers.

The owls and eagles are about four or five feet tall. “Each piece is different, I don`t have a pattern,” McKay says. “I spray them with WD40 or linseed oil” to keep the sculptures looking their best.

McKay points to his newest eagle. Number 42 is for McKay`s friend Gary Mason, who drops by to pick up his owl. “You can`t buy these; they`re not for sale,” says McKay about his work, when people offer. He means he gives them away.

On his front lawn are other inventive sculptures. There is a turtle made from what McKay calls “net bobbers.” Behind the house are tall sunflowers made from tractor trailer rims near a barbeque cut out of an old Volkswagen.  He has made coffee tables out of a wheel and an outhouse door, complete with the crescent moon. From a piece of foam, he`s created a face with a large mouth, and one ear, that says “Anyone see my other ear?” He has Minions on his lawn made from small propane tanks with lightbulb eyes.

McKay gave the RCMP an angel made from driftwood, which honors those who lost their lives in Portapique. “It has no face or hands, just a heart and body, because hands were tied,” he explains.

You can find McKay`s “Owlvin” on the Rogers Brook Bridge on the Greenway, while “McEagle” is on the Gaetz Brook Bridge. An owl called Lill in memory of his mother is on the trestle bridge over Chezzetcook River. Another eagle can be seen at Ralph`s Downeast Diner in Ship Harbour. Or take a walk past McKay’s lawn on Pleasant Drive to see more of his wonderful and unique creations.