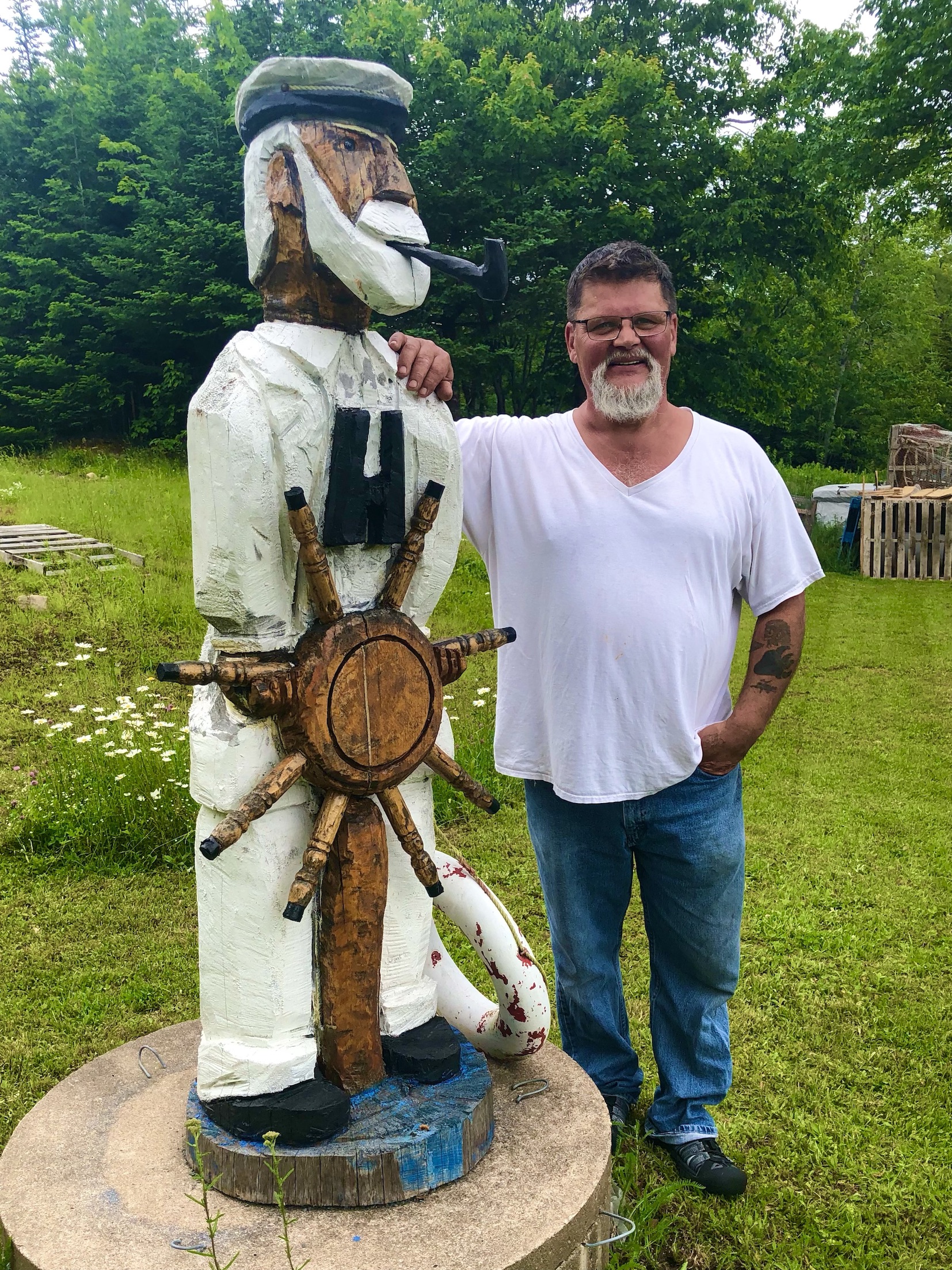 Tony Asprey is a Mi'kmaw carver who uses wood, bone, leather, and moose antlers. He creates walking sticks, folk art birdhouses, fishing boat, and carved moose antlers. About 15 years ago he died, was resuscitated, and suddenly discovered he had the newfound skill of chainsaw carving.

"I had my heart attack down in Cape Breton carrying a hindquarter of moose over my shoulder. My son and nephew were with me, and I fell to my knees. I didn't want to tell them because I didn't want to scare them. So I drove all the way home with pains in my chest."

"I told my wife Shelley, she better get me to the doctor. As soon as I laid down on the table I flatlined and they got me back with them paddles. They air lifted me fifteen minutes to the QE2 in a chopper and they put five stints in."

"I never knew I could use a chainsaw to carve but two days after I got out of the hospital, I saw this stump and I visualized a big fisherman's head. I just grabbed a chainsaw and started carving." Asprey's career as a chainsaw artist started that day. He jokes that "maybe I came back as someone else after I flatlined."

Asprey placed the carved fisherman's head on his lawn and the Millbrook Band Council bought it. He now makes a full time living with his chainsaw art and carvings. “I always say there is something in the tree that I’m going to set free.”

"When I start chainsaw carving, it’s like medication for me. All my stress is gone. It’s so relaxing."

Asprey lives in Beaver Dam, one of three satellite reserves of Millbrook First Nation in the Sheet Harbour area. "I go to Truro when they have the pow wows. It's nice. They do big meals up — salmon and moose."

Asprey has had some interesting commissions. "Somebody called me to make a carving for a new Navy boat they’re building in Halifax. They wanted me to carve a fisher. He wanted some aboriginal art on the boat so the aboriginals on the boat will feel at home." He was also commissioned to carve a goat head for a Stephen King series being filmed in Nova Scotia. "They asked if they could put a bunch of blood around it."

Asprey sells his sculptures mostly by word-of-mouth. His art is in private and public collections across Nova Scotia. His business is called Creative Native Chainsaw Carvings and people often find him through his personal Facebook page (Anthony Asprey).