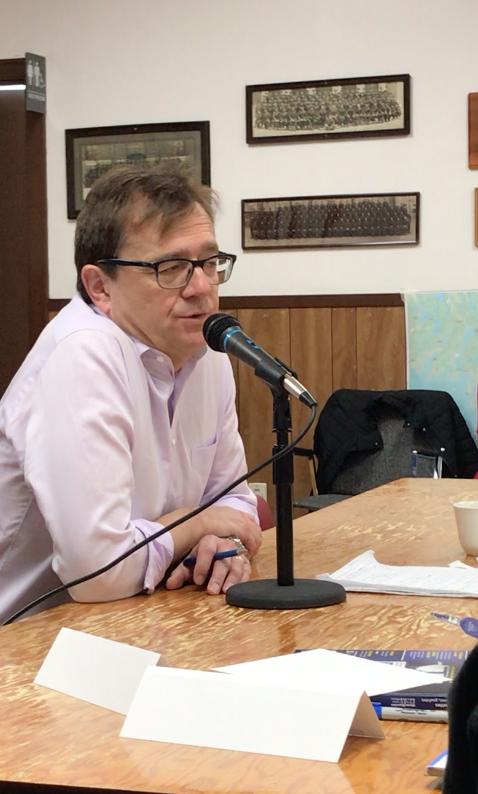 In a surprise visit to the Eastern Shore on Wednesday, May 8, Jonathan Wilkinson, the current Minister of Fisheries, Oceans, and the Canadian Coast Guard, indicated that he was seriously considering a radical change in DFO’s entire approach to the hotly contested Eastern Shore Islands Marine Protected Area (ESI-MPA): community management. And he noted several times during the course of the 90-minute meeting that the entire ESI-MPA proposal might never happen.

More than one hundred people showed up at the East Ship Harbour Legion for the hastily scheduled meeting between Wilkinson and the ESI-MPA’s Advisory Group. Invitations went out so late that lobster fishers were already on the water when news of the meeting started crackling over the radio. In a demonstration of the intensity of concern, many fishers returned early in order to attend the meeting.

The Cooperatorfirst raised the question of community-managed MPAs at a meeting of the Advisory Committee this winter, and followed up with an article in late February 2019 (“DFO Ottawa on Co-Managing MPAs”) about DFO’s experiences with negotiating with several indigenous groups to create community-managed MPAs consistent with existing treaties.

Wilkinson said that he was “absolutely more than open on a go-forward basis” to considering a community-managed MPA on the Eastern Shore. “Perhaps one way to think about greater certainty for the community is to think about a different kind of model of management, where we actually look at community-based involvement in the management an MPA on a go-forward basis, where the community itself is invested in all of the discussions about any changes going forward.”

Wilkinson said that “there are models used in other parts of the country where a community is directly involved in those conversations…. If we can get to a community-based model that is workable, it may provide communities, fish harvesters, other interested stakeholders with more control over any future development than you have right now, whether that is aquaculture-related or any other industrial activity….”

In an interview after the meeting, Wilkinson explained how DFO would decide if there were enough community support for moving forward with a given MPA proposal. “That’s a really good question,” he said, “and I think that’s a hard one to answer. It certainly doesn’t mean unanimity because you’re never going to get unanimity on anything anywhere. It certainly does mean that you have leading voices in the community, including leaders who represent large chunks of the community, that are at least somewhat supportive of the concept. What we saw today is that we’re not there yet, so that’s a work in progress.”

The provisional nature of the ESI-MPA proposal.

Later on, he added that he intended to take as much time as necessary: “There is no rush, so we will take whatever time we need to take to ensure that we’ve had a fulsome discussion to try to actually address the concerns and the issues. At the end of the day, we may or may not get there, but there is no rush, and there is no deadline, by which we actually have to make that determination.”

Wilkinson came back to the possibility of DFO walking away from the proposal in his closing remarks, where he promised to come back after the end of the lobster season “to spend more time, and better time…. This is an if, not a when…We will need to engage in a conversation going forward about how, or if, we move this forward in a manner than can address many of the concerns that were raised here today.”

[For complete coverage of the MPA debate, check out the Cooperator's special MPA page, "Debating the Eastern Shore Islands Marine Protected Area," with all of the Cooperator's coverage, plus links to info from DFO, the province, NGOs, and community groups.