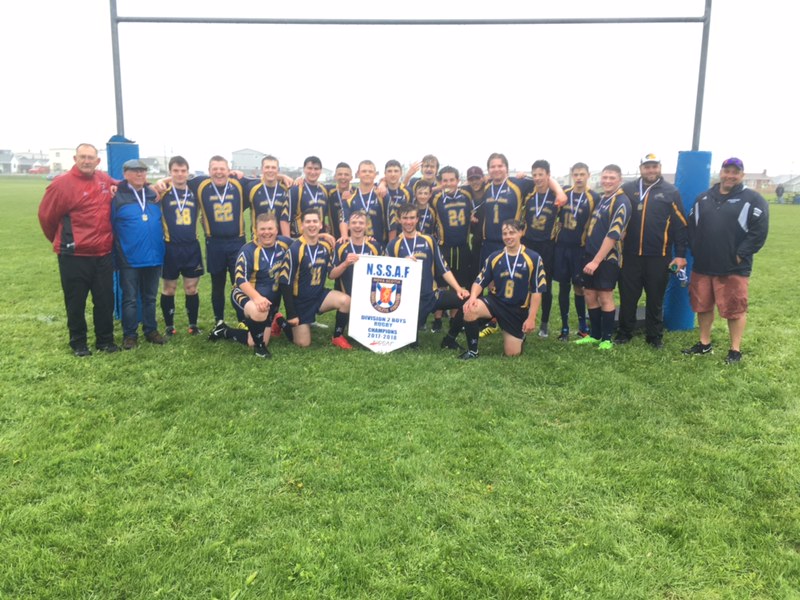 Amongst all the glamour of prom this weekend, there were some ESDH rugby players who made the impossible, possible (with the help of friends and family).

On Thursday (May 31) afternoon, the ESDH Boys Rugby team left for Glace Bay, Cape Breton, to participate in the Nova Scotia School Athletic Federation Division 2 High School Provincials at Hub Field. The Schooners came out on top of their first game, 33-0 against the Glace Bay Panthers on Friday morning. Most would probably guess that the boys went back to their hotel room for the day to rest, which was the case for some… but not all.

Six players on the rugby team who had plans to attend prom hopped into a shuttle with Jerry Beaver, a father of one of the ESDH rugby players, who drove them all the way back to the Eastern Shore District High School Prom. After a full of suits and flashing cameras the boys jumped back in the shuttle between 1am – 2am to make their way back to Glace Bay.

At 12:30 pm on Saturday, the Schooners took on the Riverview Rugrats, defeating them 48-0, earning them a spot in the championship game later that day. As 3:30 pm rolled around on Saturday the boys geared up for one last game of the 17/18 season against the Glace Bay Panthers. With only 10 minutes to go in the championship game, the Panthers led 14-5, but the Schooners rallied together to come out on top, 22-14.

The team now holds a metro, regional, and provincial banner for the 17/18 season.

In total, Jerry Beaver drove approximately 1800km (23 hours) this past weekend making both prom and the tournament a success for the boys involved.