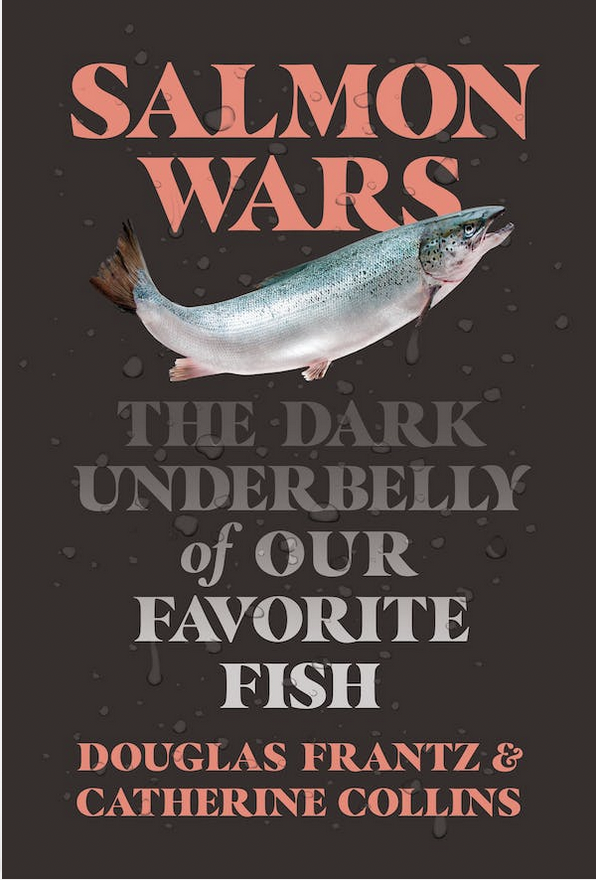 You’re standing in front of the fish counter at the supermarket. Spread out before you are an enticing array of pink salmon, each package embellished with a graphic of a salmon leaping upstream. Do you know where that salmon came from? And do you know what that salmon ate?

Authors and journalists Douglas Frantz and Catherine Collins have just published a new book that answers these questions, and many others, in Salmon Wars: The Dark Underbelly of our Favorite Fish, a thoroughly documented critique of the $20 billion ocean-based open-net salmon farming industry.

The pair have been journalists for major American newspapers. Frantz shared a Pulitzer Prize, as a foreign correspondent at the Times, and worked in the U.S. Senate and as an assistant secretary of state under Obama. As a team, they’ve written books ranging from a study of nuclear proliferation to life in a planned community in Florida for seniors.

Collins was born in Cape Breton. “I grew up eating wild salmon,” Collins said. “In January of 2020, a Lunenburg neighbor told us about a community meeting about a Cermaq proposal to build 20 open-net fish farms in Mahone Bay. More than 400 people showed up, flowing out of the hall. People expressed a lot of deep concerns. So we did what we had done on many topics in the past; we decided to investigate.”

“We quickly discovered that most people don’t know where their salmon comes from,” Frantz said. “The industry has been very successful at controlling the narrative.” Not a single company would talk with them. “But we pieced together a pretty good look without their cooperation, using annual reports, lawsuits, freedom of information requests, and interviews they’d done with the mainstream press.”

Their book documents in exquisite and sometimes disgusting detail the many conflicts they discovered in open-net fish farming from Norway, Chile, Washington State, British Columbia, and Nova Scotia. “There were conflicts between grassroots groups and the industry, conflicts between government agencies, conflicts within government agencies, especially those charged with monitoring and promoting the industry. All these conflicts emerged as a war, which is where we got our title.”

“It’s a war with real casualties,” Collins said.  Wild salmon are carnivores, and thus far, feeding farmed salmon requires catching enormous quantities of lesser fish, grinding them up and converting them into pellets to feed the farmed salmon.  “What’s happening on the west coast of Africa is a crime,” Collins said. “Fishing has always been a part of everyday subsistence there. Instead, these fish are going to feed farmed salmon. Local fishers are suffering.”

Opposition to open-net fish farms has been growing around the world. The crowded cages foster viruses and other diseases, and the use of toxic chemicals to control sea lice that attack the fish. Escaping fish can carry these threats to wild salmon populations. And surplus feed, feces, and other chemicals layer the bottoms beneath the cages. The book cites estimates of mortality rates for farmed Atlantic salmon between 15 and 20 percent globally. And because salmon are cold-water fish, global warming poses a growing threat everywhere.

Concerns about the survival of wild salmon have fueled successful efforts to ban, or diminish, salmon farming on the west coast. In Washington State, the legislature decided to ban open-net fish farming entirely after the dramatic collapse of a Cooke Aquaculture operation catalyzed public opposition.  “What people saw on video was a crushed, mangled mass of metal,” Frantz said. “An estimated 250,000 Atlantic salmon escaped, threatening to damage the genetics of the wild Pacific salmon. And when they pulled the nets out, people could see how completely fouled they were with mussels and seaweed. Cooke hadn’t been keeping the nets clean so water could circulate to carry away the feces from those hundreds of thousands of fish.”

In British Columbia, opponents of open-net farms, led by decades of work by biologist Alexandra Morton, have succeeded in forcing the federal government to commit to removing open-net farms from BC waters by 2025. However, DFO’s decision in September to allow Cermaq to increase production at three farms has raised doubts about the government’s commitment to this promise.

“Since the book came out, interviewers keep asking us whether they can buy salmon that are grown on land,” Collins said. “The answer is yes, you can.”  In their book, they highlight the work of companies using RAS (recirculating aquaculture systems) that vastly reduce the amount of pollution reaching the environment, while also isolating the farmed fish from wild fish. “Atlantic Sapphire, in Florida, is the biggest operation right now by a factor of 10,” Collins said. Two RA RAS companies in Nova Scotia sell land-grown salmon, Sustainable Blue (Centre Burlington) and Cape D’or Salmon (Advocate Harbour).