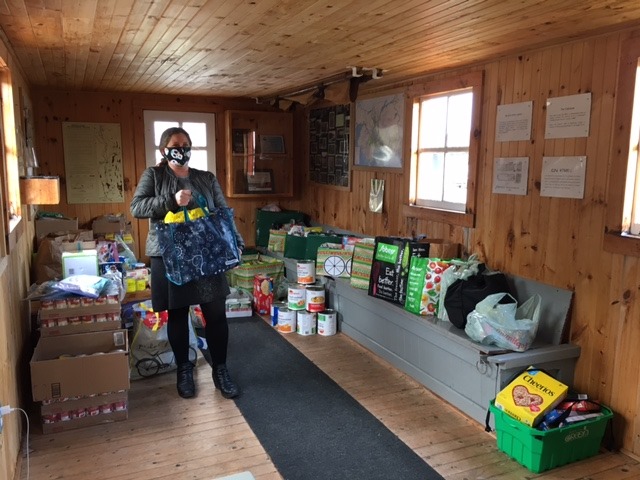 Fill the Caboose event was a massive success. Thanks to many community organizations and the people who donated, the Musquodoboit Harbour Food Bank brought Christmas to 70 families this year.

Tegan Smith from the Railway Museum spoke with the Cooperator on how Fill the Caboose came to be. “We knew with all the seasonal Christmas and band concerts cancelled, food bank donations would be low. To fill that gap, we came up with something different. Fill the Caboose became a rallying name for the community. To make it happen, we reached out to businesses in the community.”

Oster Pond Academy, Dobbit Bakehouse, the Musquodoboit Harbour library, Railway Museum, the Lions Club, the Old School, Uprooted, Taylor Timber Mart, Ship Shape Barber Shop, and Sobeys Jeddore were all on board. The businesses up boxes in their lobbies for donations, and the event was promoted through social media and posters. With a unifying, eye-catching, branded label on every box, Smith said the event was “uniquely visible to the community.”

Smith said their original plan was to pick up the totals from the organizations after a month had passed. “But little did we know how successful it'd be! I think it was after the first week we got a call from Dobbit’s saying their box was filled to the brim. I had to go in every week to pick their overflow up.”

This event also brewed a friendly rivalry between businesses. Dobbit Bakehouse competed with Uprooted Café to see who could bring in the most donations. It was a close call, but Uprooted came out on top, meaning that Dobbit brought Uprooted’s staff hot chocolate as a reward.

On the final day, it took three pickup trucks and one SUV, crammed chock-full with donations, were carry all the food from the Museum to the Food Bank. There was also a literal boatload of food from the earlier Santa’s sleighride event speedboat! And there were additional contributions from the students at Eastern Shore District High doing their own food drive with the Old School Pantry .

Smith is thrilled with the success. “It’s so amazing to see the direct impact of our efforts as the Christmas hampers of food are going out tonight. It’s all from the community going back into the community. Such a great moment seeing at the incredible amount of food donated. I'm so proud of the community, the organizations, and the donators. This is the first time we've done this, born of the idea that this year was tougher than most. But thanks to this success, it certainly won’t be the last.”

The need doesn’t stop now that the holiday season is over. “The Food Drive is complete for this year,” said Smith, “but many businesses are still collecting, including Taylor’s and the Old School.”