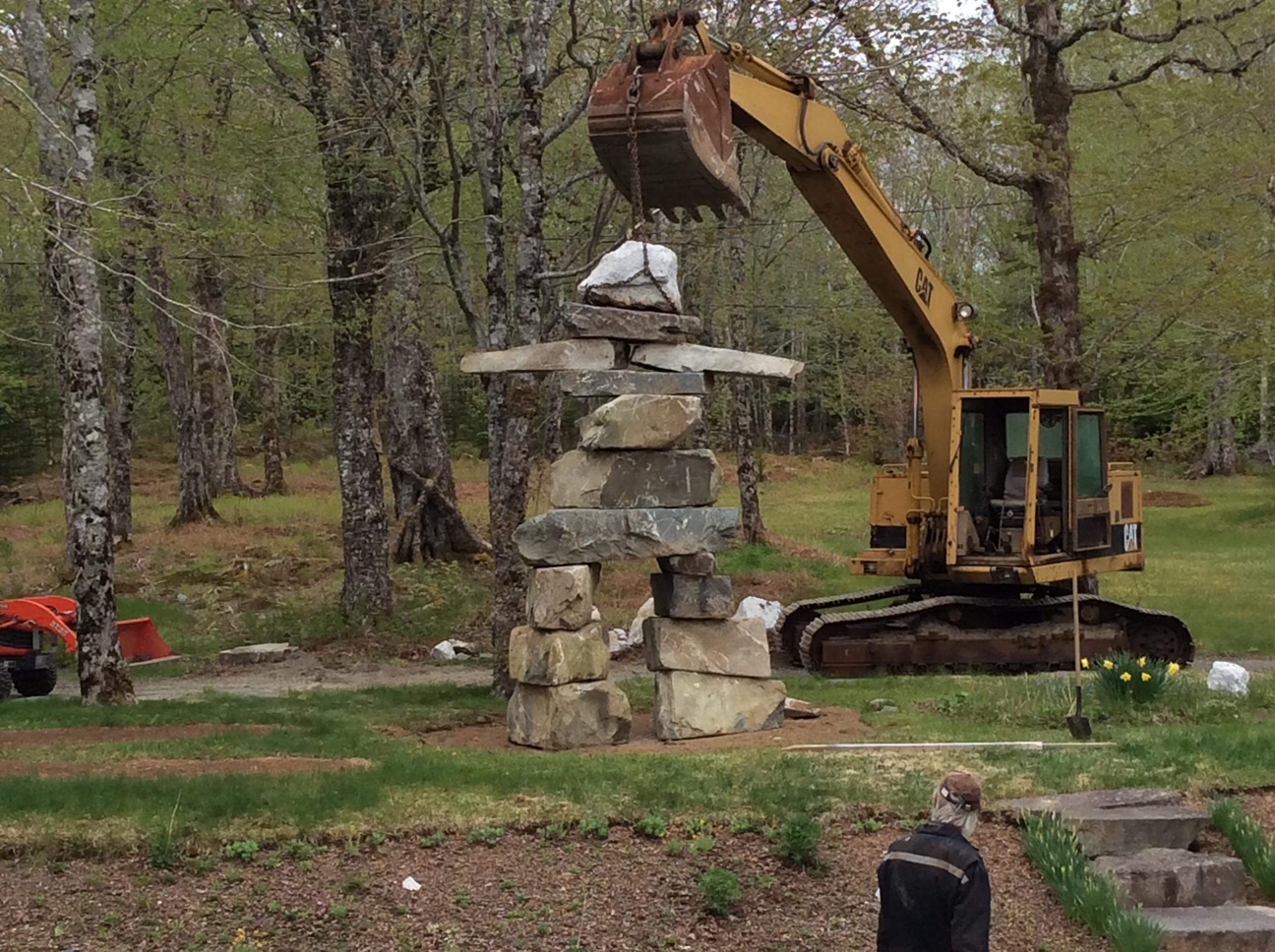 If you have ever travelled through Oyster Pond, you probably noticed the Inukshuk sculpture perched on the edge of the ocean. The fact that it has stood strong in that spot for fifty years is due to the talents of its creator, excavator artist Jimmy Kidson. Kidson lost his battle with cancer in December 2021. In interviews, Kidson's wife Lynda, along with his friend and client Allan Banks, owner of Harbour Breezes Daylilies, offered insight into the man behind this Inukshuk.

Jimmy Kidson dramatically changed the landscape of the Eastern Shore. "Jimmy's Dad taught him his skills as a child and a teenager,” Lynda said. “He often was on the machine loading trucks with fill in a pit."

Kidson graduated from Dartmouth Vocational School in 1972. "He studied Diesel Engine Repair and then he just started working for other people,” Lynda said. “He liked the operator part the best, the repairs were not the big part."

"They hired him to do it and suggested he would be on his own to do what he felt like,” Lynda said. “He gathered the rocks from our property and took them over there by truck and just started constructing it. He started by digging a hole and filling it with a clear stone base so the frost couldn't get underneath it. If the frost got into the ground underneath it would heave and it might tip. Then he put some ground on top of it and just started one rock after another."

"I remember I asked him about it and he said everything went pretty good except when I came to the arms because the arms have to balance,” Banks said. “I think what he did was put one arm too far in and then another rock on top of it and then was able to push it out and have the rock on top holding it and then put the other arm in with the top rock to hold it."

Kidson went on to build two more Inukshuks. "The one in Pleasant Point was made in 2016 and was commissioned by Wayne and Bonnie Kent,” Lynda said. “The one at our home in Lake Charlotte was done in June of 2020."

Kidson created rock walls, sea walls, ponds, gravel pathways, stone steps and so much more all along the Eastern Shore. "Everywhere he worked, people were surprised by his vision and what he could do with the machine,” Lynda said. “They would often have him in there and have no idea what they wanted and they would say, 'You do what you think.’ We got many emails complimenting him on the job he'd done and there was never one person after twenty five years in business who did not pay their bill. People were always happy with his work.”

Kidson recreated the four acres of rugged land Banks owns into a magnificent garden oasis. "I wanted Jimmy to dig a pond in a damp area,” Banks said. “He started and went a foot down and hit bedrock, and I said ‘Well can you build it up and we can put a liner in.’ He said 'Just let me try something else.' He got a big boulder and just kept dropping it with the machine and broke up all the bedrock down five feet and the pond has been beautiful ever since."

Banks dedicated a daylily to Jimmy chosen by Lynda Kidson. It sold out. "I chose it because it was a deep rich colour and it was not showy, kind of subdued,” Banks said. “That was more his personality. He could walk into a room and you wouldn't even know he was there. He was very quiet, very soft spoken."

"I ran the office and Jimmy ran the machinery,” Lynda said. “We were a good team in life.  If people had a vision, he could make it a reality. If they didn't have a vision, he would design it for them and they were always happy. He had a gift."

The universal love of Inukshuks has not diminished over the last fifty years. Canadians and the world love the image and increasingly understand its cultural heritage. In respecting that cultural importance, governments, museums, and corporations have developed new guidelines for creating Inukshuks in public spaces. These Inukshuks are built in the North by an Inuit artist. The stones are then numbered, disassembled, and then reassembled the exact way it was originally built in the North.