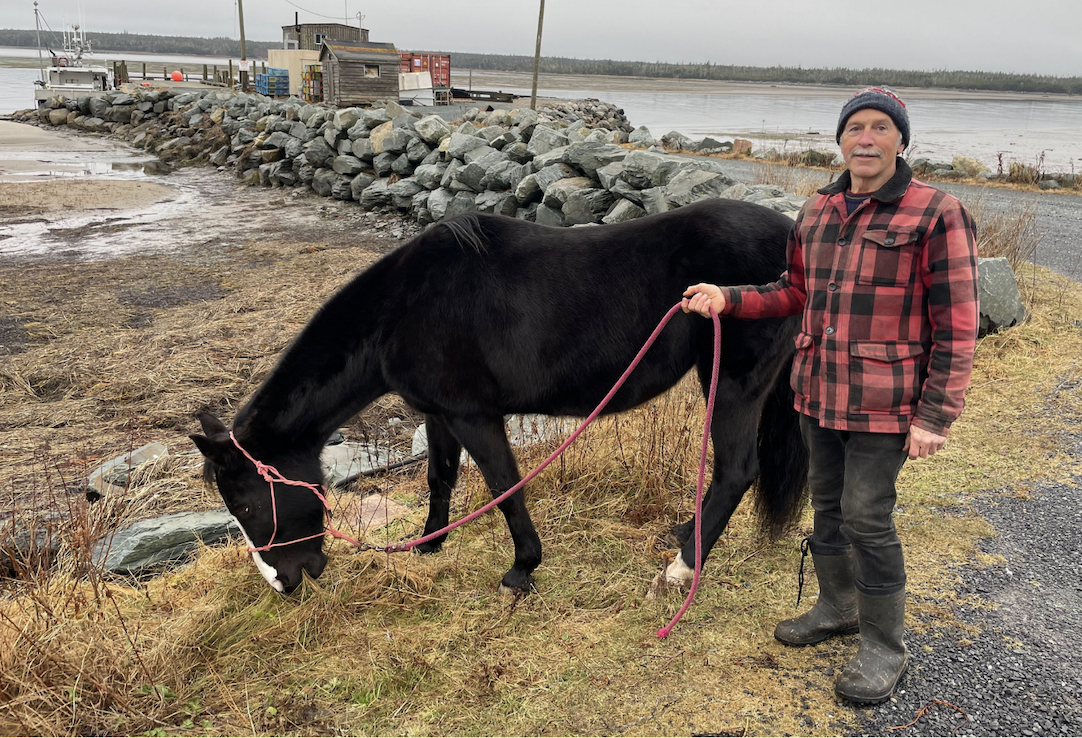 Keeping an Angel on East Petpeswick

Residents along the Eastern Shore are up in arms over the possibility that an HRM Municipal Compliance inspector will order the removal of a community-beloved horse from her home at 1783 East Petpeswick Road because of alleged violations of HRM zoning regulations.

In less than a month, more than 3,200 people have signed a Change.org online petition opposing any action by HRM. And signs to “quote” have been sprouting up along East Petpeswick like mushrooms after a spring rain.

Robin Clayton brought Angel to his home on East Petpeswick back in 2015 after he built a small corral and a 12x16 foot barn to house her. Since then, Angel has become a familiar presence along East Petpeswick, grazing on select front lawns and winning the hearts of children and adults.

In a phone interview with the Cooperator, Clayton explained how Angel came into his life in the spring of 2015, and how a city inspector had come to suggest he would have to move her.

“I had had horses 30 years ago,” Clayton said. “After my wife Pat died, I had some spare time, so I got hanging around with horses again at a farm in Gaetz Brook, mucking out stalls. There was this good-looking black horse that nobody was doing anything with, so I started spending time with Angel.”

The farm’s owner told Clayton that Angel was not in good shape when they bought her two years earlier. But by the time Clayton met her, she had regained all her weight and was in good shape. “She’s a registered Tennessee Walker,” Clayton said. “Phantom’s Angel is her registered name. They told me she’d never been ridden, so I broke her to saddle. And after I’d started riding her, the owners asked me if I wanted her. I couldn’t say no. I was kind of attached to her by then.”

Clayton ran out, bought some fence posts, and built a corral. In August of 2015, he built the small building for Angel. “I didn’t get a building permit—I didn’t think you needed a permit for such a small building,” Clayton said. “And my neighbors didn’t mind horses.”

The threat to remove Angel emerged on December 3, 2021, when Clayton got an unexpected visit from Trevor Oliver, a compliance officer with HRM’s department of Buildings and Compliance. Someone had made a complaint about the state of the buildings on Clayton’s property. Oliver issued three “Municipal Compliance” orders about painting and clean up the property.

But on his way out, Oliver surprised Clayton by telling him that the locations of Angel’s corral and barn were in violation of a specific HRM bylaw, and that he was going to have to move the horse. But Oliver then department without issuing a formal compliance order.

Oliver came back the following week to see if Clayton had completed the maintenance on his doorstep. “He told me I hadn’t got rid of the horse yet, and that he was going back to do the paperwork,” Clayton said.

As of Friday, January 14, Clayton had not received any orders from Oliver. The Cooperator attempted to contact Oliver, but he has yet to reply.

Clayton said he was very moved by the outpouring of support on social media, starting with the thousands of people who’ve signed the “I Ride with Angel” change.org petition. And in comments on the Change.org site and on community Facebook pages, people have been posting messages of support and concern, offering to help Clayton with his repairs, and to raise money if he should ever need a lawyer. HRM District 2 Councillor David Hendsbee visited with Clayton and Angel and has sent a letter to Compliance asking them for more information. Hendsbee was still waiting for a reply at press time.