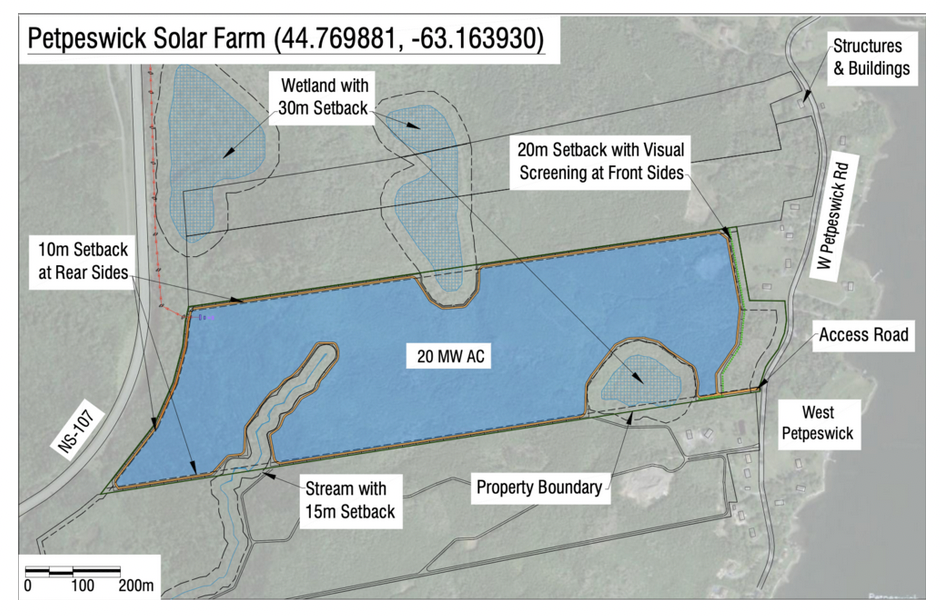 A Cape Breton-based renewable energy company has applied to build a large, 20MW solar farm on 40 acres off upper West Petpeswick Road in Musquodoboit Harbour. If completed, Petpeswick Solar Inc. will generate enough energy to power over 4000 homes annually, and reduce total GHG emissions by an estimated 168,000 tCO2e per year by 2030.

Petpeswick Solar Inc is a project of two companies: TriMac Engineering in Cape Breton, which does renewable energy projects, and Abundant Solar Energy, a solar photovoltaic (PV) developer in Toronto. TriMac and ASE are also bidding on three other large-scale PV projects in Guysborough, Yarmouth, and Inverness.

These projects are all in response to the July 10, 2021 provincial announcement of the goals of generating 80 percent of the province’s energy from renewable resources by 2030, and achieving net-zero by 2050.

The Cooperator spoke with TriMac’s Joel MacNeil and ASE’s President Richard Lu at the end of March. The two began talking about projects in Nova Scotia over lunch in Toronto in August, 2021. MacNeil has spent most of his career working on renewable energy projects.

“We very quickly identified we were looking in the same direction,” MacNeil said. “We’ve been moving fast since then, and we’re very confident we’ll be successful.”

Lu explained that their business model involved putting together a group of investors, buying or leasing the land, negotiating a Power Purchase Agreement with Nova Scotia Power, getting all the necessary permits, and building the solar farm. Lu said that they had been meeting with 13 Mi’kmaq First Nations about investing in the four solar farms, with the goal of having the Mi’kmaq own 51% of each project.

The RFP process closes in May 2022, and the province will announce the winning companies in August. MacNeil said that assuming the province picked Petpeswick Solar, they hoped to begin construction in the 4th quarter of 2023, and be up and running by mid-to-late 2024.