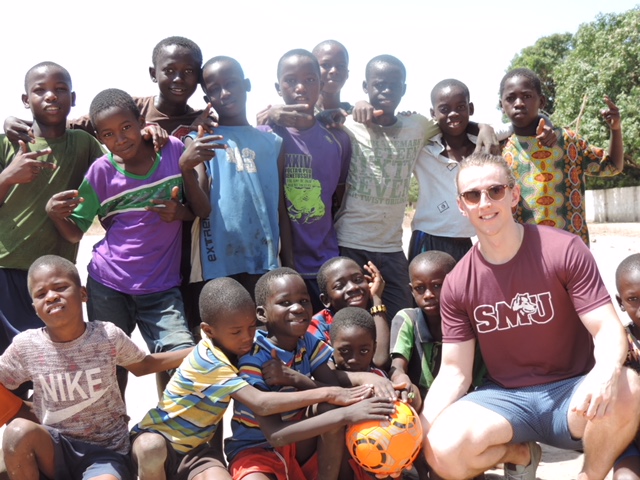 Keegan McGinnis, 21, of Cole Harbour has created a business that leaves a lasting impact on those in need. Just over a year ago McGinnis created his business, My Greatest Play: Clothing With a Purpose,  when one of his professors told him about  an entrepreneurship competition happening in Halifax.

The competition was called Hatch and was hosted by Junior Achievement and Revolve Marketing. The unique part of this competition was that participants didn’t need to have an operating business, they just needed  an idea.

McGinnis knew from the get go that he wanted to target the  sports community. He knew that his competitive sports career wouldn’t last forever, so he set his sights on giving back to sports after gaining so much over 15 years.

“Originally, I wanted to give back to the sports community in Nova Scotia, but  found it would take a lot of money to make a small difference,” McGinnis told the Cooperator. “That’s when I began looking at what I could do in developing countries, knowing that just a little bit of money  could  go a long way. It didn’t take long to discover the need for soccer balls in Africa”.

McGinnis took home first place in the Hatch competition and was just recently selected as one of Canada’s top 12 student entrepreneurs for 2018.  My Greatest Play works on a one-for-one business model. For every piece of clothing you buy, the company donates a soccer ball to  a  school in The Gambia, in your name. The company buys the s occer balls in Gambia’s capital city Banjul. From there they  are distributed to  the schools to be used for  things like Phys-Ed class, lunch period, after school activities, and the school  soccer  team. So hundreds of students get the use  from  just one ball.

“We were once told by the head master of a school we gifted a soccer ball to that he knew attendance would be way better going forward now that the students knew they could play soccer if they came to school” McGinnis said.

McGinnis recently had the opportunity to travel to The Gambia.  His trip was 15 days long. He brought back stories to share with people back home. And the trip really put things into perspective for him. “It didn’t make me appreciate  the things I have  more,” McGinnis said. “Instead it made me wonder why I need them. People in The Gambia make do with what is available to them and are so proud of their ingenuity.”

Since starting  his business, McGinnis estimates  that 300 soccer balls have gone to schools across The Gambia.  My Greatest Play has shipped its clothing line to almost all of Canada’s provinces as well as a few states such as Pennsylvania and Virginia.  If you wish to have a soccer ball donated in your name to a school in The Gambia, you can purchase  clothing at www.mygreatestplay.ca.