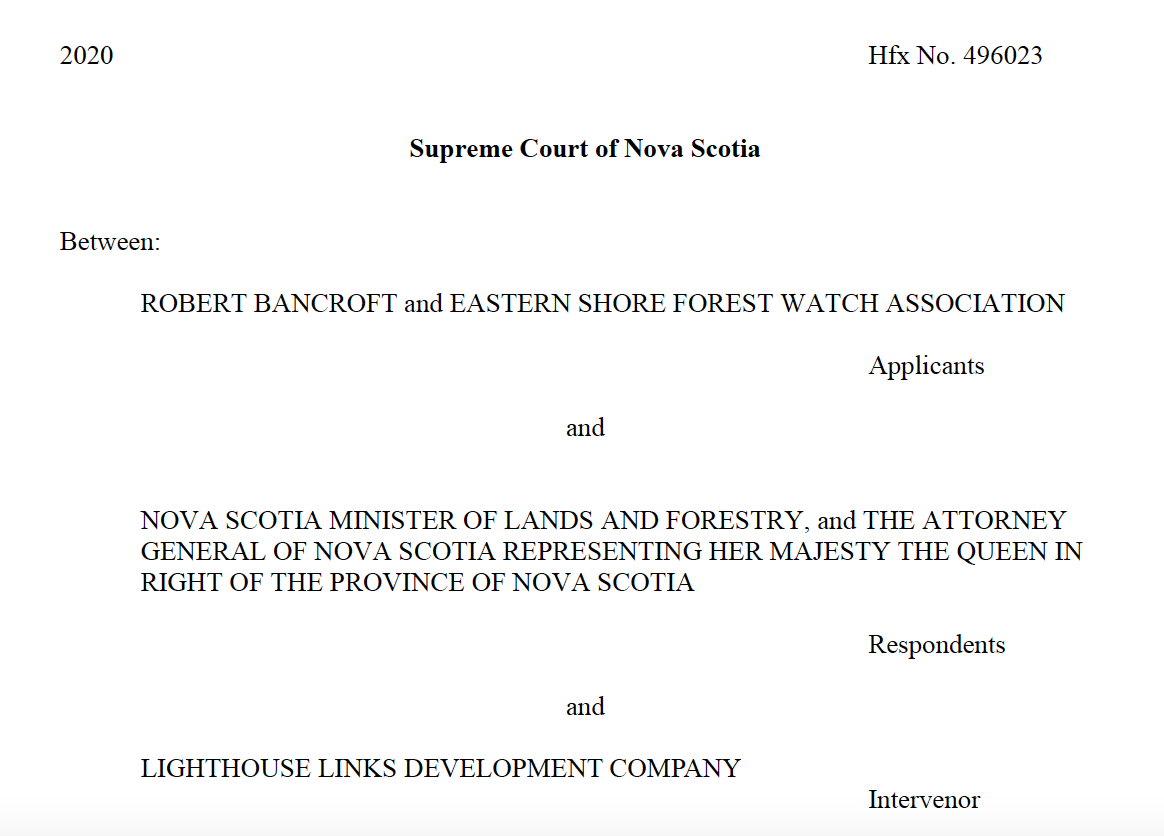 Opponents of an American billionaire’s proposed enclave of luxury housing and two or more golf courses on top of Owls Head Provincial Park got their day in court on April 1, 2021. At issue was a fundamental question about whether there should be any restraint on the decisions of the government in selling off parks and other protected lands.

The province began negotiating in secret in 2016 with American billionaire Beckwith Gilbert, who proposed buying Owls Head Provincial Park in order to convert it to a real estate development for the wealthy, with some golf courses on the side. On March 19, 2019, on the recommendation of then Lands & Forestry Minister, now Premier, Iain Rankin, the Treasury and Policy Board de-listed Owls Head Provincial Park, making it available for sale.

Negotiations continued in secret until December 18, 2019, when CBC reporter Michael Gorman broke the story, based on heavily censored FOIPOP documents. The government knew the Gorman story was coming. Two days before it broke, on December 16, 2019, Rankin signed a Letter of Offer with Lighthouse Links, Gilbert’s company, for the sale of the de-listed park. The terms of this letter of offer did not become public, with redactions, until a FOIPOP released on April 17, 2020.

In response to this secret de-listing and secret letter-of-offer, Bob Bancroft, a biologist with the Department of Lands and Forests for 18 years, and the Eastern Shore Forest Watch Association, an organization that has participated in decades of public consultations about the province’s parks and wilderness areas, filed an application for a judicial review of the decisions to de-list the park and sign the Letter of Offer. Their attorney is Jamie Simpson, who previously won a judicial review case on May 29, 2020 against then Minister of Lands & Forestry Rankin for failing to carry out his duties under the Endangered Species Act. The justice in this case was Justice Christa Brothers, who is also hearing the Owls Head judicial review.

Simpson began with a detailed history showing that for the last 40 years, the province had consistently presented Owls Head Provincial Park to the public as a park, in a series of documents and maps. He pointed to what appeared, on the surface, to be one of the province’s most definitive statements on the question, in the 2013 Our Parks and Protected Areas Plan.

The Executive Summary states, “With these changes, the new parks and protected areas system will include: 205 provincial parks.” And “Appendix A: Lands” presented “a complete list of new protected areas, as well as provincial park properties.” The list included 782 properties, listed alphabetically. In position 694, the document lists “Owls Head Provincial Park” as an “existing” park.

What the public was not aware of  was that the province had never gone through the formal process of designating Owls Head Provincial Park as a “park.” And in fact, more than 100 of the other properties in the Plan were in the same undesignated category.

Simpson had already confronted this issue last summer, during a hearing about whether to allow the judicial review to proceed at all because the applicants had missed a filing deadline. In his ruling allowing the review to go forward, Supreme Court Justice Kevin Coady stepped outside the narrow issue of the filing deadline, writing:

“The evidence on this motion clearly establishes that Owls Head was portrayed to the public as a Provincial Park. Government documentation and maps, going back as far as 1978, refer to the area as ‘Owls Head Provincial Park’.…The public had every reason to assume Owls Head was a provincial park and, therefore, attracted protections not available on Crown lands.”

During the testimony on Thursday, the nature of the many government documents misrepresenting the status of Owls Head Provincial Park for more than 40 years troubled Justice Brothers. She asked Crown attorney Jack Townsend if, whenever officials became aware of the decades of misrepresentation, the government should not have informed the public.

“It looks like the government was wrong,” Justice Brothers said. “Does the government, in being wrong, set up some expectation for the public that then were not met?....Is there any legal principle, some kind of fairness obligation for the government to say, ‘We were wrong, it’s not a provincial park, it’s never been designated, we’re telling you in advance’….Did they owe that notice?”

Townsend’s answer was quick, and unequivocal: “I would say no.”

No Expectation for Public Consultation

Townsend was equally dismissive of the public’s having an expectation that the government should have conducted some public consultation before deciding to sell off Owls Head Provincial Park, or any of the other more than 100 similarly situated properties, or sign the Letter of Offer.

In the morning, Simpson had argued that history showed that the public had an implicit right to expect a public consultation on any decision of the magnitude of selling off a provincial park. He went through a large number of statements from various provincial documents over the years discussing the importance of public consultation in the management of parks and public lands. His most telling example was the 2013 Our Parks and Protected Areas Plan. This document was the result of a multi-year review, growing out of “a key recommendation of the Natural Resources Strategy (2011) to engage Nova Scotians in ‘a focused dialogue about provincial parks.’ The strategy [of the 2013 Plan] outlines the need to inform people about the park system, ask what they value most, and involve them in setting priorities.”

In 2012, the province had held public meetings in 20 communities and conducted nearly 1,500 interviews with park users and non-users to examine their perceptions and preferences. The 2013 plan reflects the extensive input received through that process. In response to the draft version, there were 2,000 written comments. And 1,300 people attended 17 public open houses around the province.

But in his afternoon presentation, Townsend made a sweeping counter-claim. He noted that while the law gave the Minister the power to sell Crown land, “There is no process” in the law that the Minister was obliged to follow.

So in the absence of legislative language requiring some process, the Minister could do what he wanted to do. There was no reason for the public to have any expectation, much less a right, that the Minister would use a process with some form of public consultation in deciding to sell Owls Head Provincial Park.

“Why Should I Be the First Judge in Canada?”

Simpson included an argument based on adopting the public trust doctrine into Canadian law. The public trust doctrine is fairly well developed in U.S. law, but has not yet been accepted in Canadian law. The doctrine, which is rooted in common law, grew out of a growing recognition that existing laws were not sufficient to deal with a number of environmental problems where the public as a whole were threatened by air pollution, global warming, etc.

Bringing the public trust doctrine into the law necessarily places limitations on both private interests and on the government itself. In holding resources like lakes or parks “in trust,” governments assume a different relationship and responsibility towards those resources than under current interpretations of Canadian law. If Canadian courts were to recognize the public trust doctrine, then future Ministers of Lands & Forestry could more easily be held responsible if they failed to consult the public on critical decisions that appeared to be in violation of the public trust.

So it was not surprising that Judge Brothers asked Simpson to explain, “Why should I be the first judge in Canada” to rely on the public trust doctrine, given the reluctance thus far of other Canadian judges to cite the doctrine. Simpson went through statements of Canadian judges from a series of cases arguing for the benefits of incorporating public interest doctrine into Canadian law; from their perspective, the common law is not a fixed, unchanging entity, but something that has changed over time in order to deal with changes in the world at large.

Crown attorney Townsend responded with an equally long list of citations from other Canadian cases from judges offering a variety of reasons against adopting the public trust doctrine.

At the conclusion of hearing, Justice Brothers, as expected, announced that she would be reserving judgement.