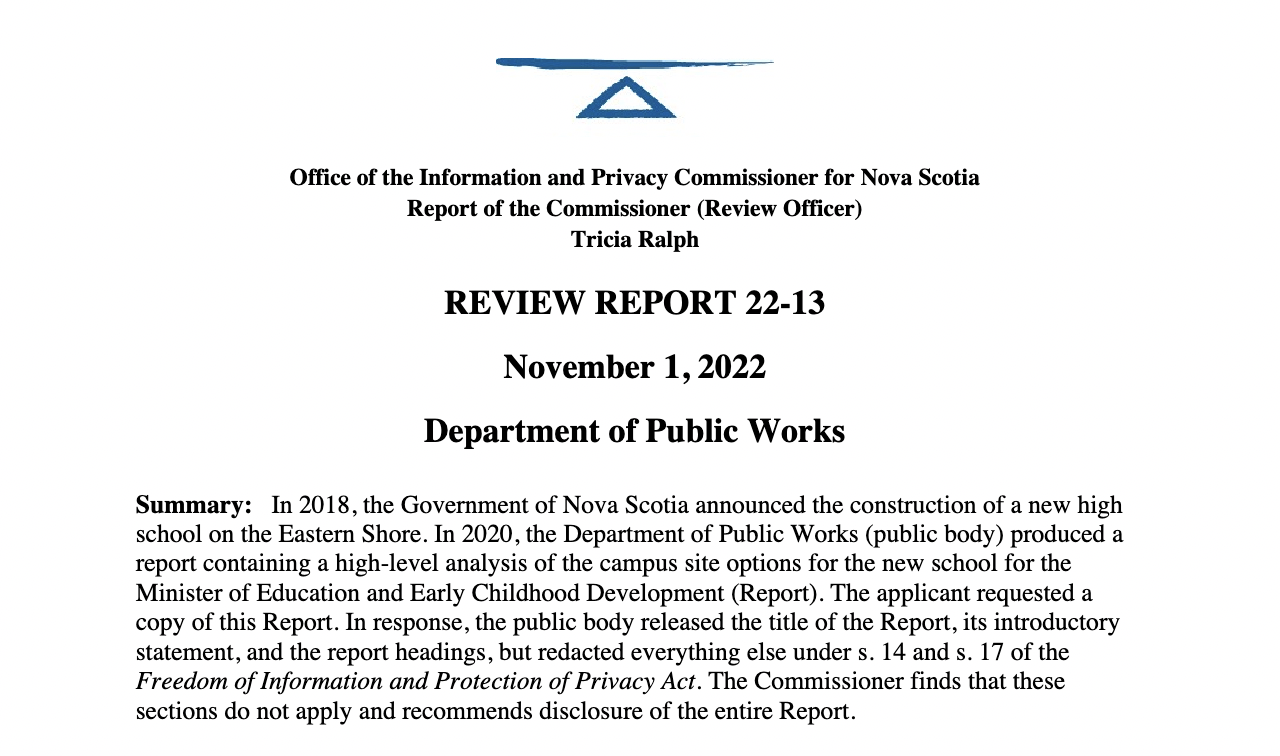 Nova Scotia’s Information and Privacy Commissioner Tricia Ralph has issued a strong rebuke of the Houston administration’s attempt to prevent the public from ever understanding why the province decided to place a new junior high/high school in the East Chezzetcook Industrial Park, rather than renovating or replacing the current building in Musquodoboit Harbour.

At issue is a March 20, 2020, 6-page report prepared by the Department of Public Works analyzing two proposed sites for the new school. The report was labeled “Eastern Shore District HS, Campus Site Options—DTIR High Level Analysis.” The then-Liberal government kept the existence of this report secret.

But in the fall of 2020, in response to a FOIPOP request, the Department of Public Works released a version of the document containing only an introductory statement, and the report headings. The government claimed that two sections of the FOIPOP Act, s.14 and s.17, allowed it to redact the entire text. The applicant did not appeal the rejection.

When Tim Houston became Premier, Karen Bradley of Musquodoboit Harbour decided to ask for the same report. Houston had built his political career attacking the secrecy of the Liberal government and had promised during his campaign to amend the FOIPOP Act to give the Information and Privacy Commission order-making power, so that the Commissioner’s findings would be binding on the government, instead of being non-binding “recommendations” as they are under the current law. (McNeil promised to make this same change in his first campaign, and never did.

But Houston’s DPW reissued the redacted report, once again citing s.14 and s.17. Bradley exercised her right to appeal, and Office of the Information & Privacy Commissioner Investigator Jason Mighton conducted the review. Mighton found that neither s.14 nor s.17 applied and recommended that the government release the entire document.

Once again, Houston’s office refused the recommendation. While the government was reviewing Mighton’s analysis, I spoke with staff in Houston’s office, who confirmed that the decision not to release the document was made in the Premier’s office, not at DPW.

Section 14 allows the province to withhold information if disclosing that information would “reveal advice recommendations or draft regulations developed by or for a public body or a minister.”  Ralph found that “Section 14 does not apply to the withheld portions of the Report.”

Section 17 allows the province to withhold information if disclosing that information “could reasonably be expected to harm the financial or economic interests of a public body or the Government of Nova Scotia or the ability of the Government to manage the economy….”

Ralph found that “Section 17(1) does not apply to the withheld portions of the Report.”

Ralph’s recommendation: “I recommend that the public body disclose the information severed under s.14 and s.17(1) within 45 days of the date of this review report.” You can read the complete version of Ralph’s Review Report 22-13 on the OIPC website.

The Cooperator asked Houston on November 8th for a statement responding to Ralph’s recommendation but is still awaiting a reply.

If Houston decides to continue withholding the report, the FOIPOP Act allows for an appeal to the Nova Scotia Supreme Court. Bradley told the Cooperator that she intended to appeal if necessary and has already retained counsel.

“There’s something in this report that’s embarrassing or damaging to the final decision,” Bradley said. “But the people of Nova Scotia paid for this report, and we deserve to see it, regardless of what the contents may be.  In addition,  if the report reveals problems with the current high school building, the community needs to understand what these problems are, for current and future tenants of the building.”

[Note: Bradley serves on the board of the Cooperator. She is married to the author.]